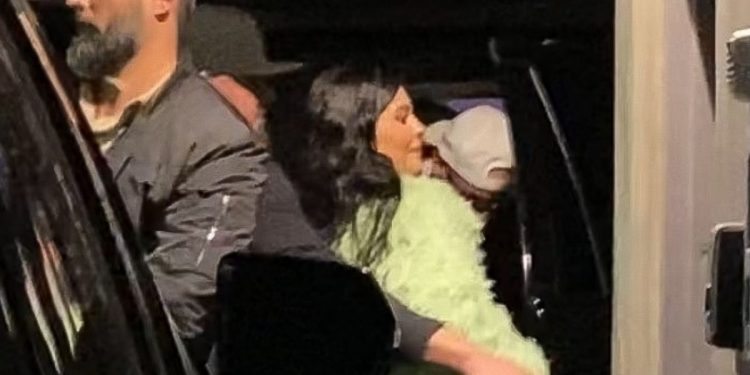 
Kylie Jenner, who is set to return to our screens in upcoming show The Kardashians, looked stylish as she attended a friend’s event, after opening up about her struggles with postpartum

Kylie made her first public appearance at an LA event, after the birth of her son (

Make-up mogul Kylie Jenner has made her first public appearance since the birth of her son, after opening up about her postpartum issues.

The reality TV star attended a friend’s event, after she and partner Travis Scott, 30, welcomed their son Wolf in February.

The youngest Kardashian sibling, 24, was seen in Los Angeles this week where she attended the Sunny Vodka event hosted by her friend Stas Karanikolaou.

Kylie, who is also mum to four-year-old Stormi, wore a floor-length fuzzy green jacket and what appeared to be silver metallic boots.

Kylie shared snaps of her pregnancy before giving birth in February
(

She wore her long dark hair in loose waves down her back.

The public appearance came after Kylie shared a poignant message to those struggling with postpartum following Wolf’s birth.

She took to her Instagram Stories to share her experience with postpartum and admitted it has been ‘very hard’.

“I just wanted to say to my postpartum mums that postpartum has not been easy,” she told her followers. “It’s not been easy, it’s very hard. This experience personally has been a bit harder than with my daughter.

The influencer spoke candidly about her struggles
(

“It’s not easy mentally, physically, spiritually. It’s just crazy. I didn’t want to get back to life without saying that because I think we can look on the internet, for other mums going through it right now, it might look a lot easier for other people and it puts pressure on us.”

Kylie added: “It hasn’t been easy for me. It’s been hard and I just wanted to say that.

“It’s okay to not be okay. Once I realised that I stop putting so much pressure on myself and I keep reminding myself that I made a whole human, a beautiful healthy boy.”

She concluded her honest message: “We have to stop putting pressure on ourselves just to be back, not even physically, even mentally.”

The make-up mogul delighted fans when she shared a sweet black and white snap on Instagram with the caption: “2/2/22”.

Kylie with her daughter Stormi

The photo appeared to be Kylie and Travis’ daughter Stormi clasping her new little brother’s wrist in an adorable sign of affection.

Kylie is set to appear in her family’s latest reality show on Hulu, The Kardashians.

The series will follow the sisters on their career paths, but also show the bonds they have with each other.

Revealing the air date for the new series – April 14 – the Hulu trailer promises The Kardashians are “back in business doing what they do best”.

The last episode of Keeping Up With The Kardashians was broadcast on E! in June 2021.

At that point fans had been watching the crazy lives of the family unravel on TV screens for 14 years – with the first series airing in 2007.