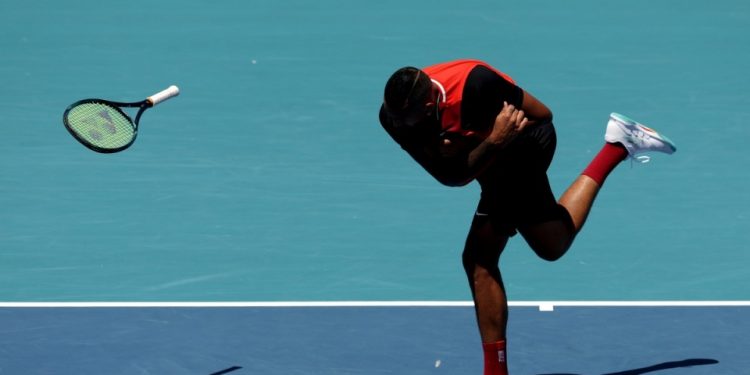 Nick Kyrgios has had another monumental meltdown, losing his cool, losing his way and eventually losing all respect in an ugly defeat at the Miami Open.

Against the almost saintly Jannik Sinner on Tuesday, the Australian let himself down once more with a display of garrulous petulance and contemptuous treatment of umpire Carlos Bernardes that no official should have to take.

Kyrgios was just one more outburst from being defaulted in the match but after being penalised a game’s loss at the start of the second set, he went down snarling anyway, losing 7-6 (7-3) 6-3 in his last-16 match.

It was the second tournament in a row in the US where the volcanic Australian has exited amid sorry scenes.

It followed the $US25,000 ($33,300) the serial offender was fined for nearly hitting a ball boy after smashing his racquet and yelling an obscenity during his Indian Wells loss to Rafael Nadal.

His latest exit exhibited all the hallmarks of Kyrgios once again feeling the world was against him, as he moaned from the start about the state of the court, about the “worst” US crowd and about Brazilian umpire Bernardes being unable to control proceedings.

The sadness, as so often, was that his behaviour spoiled some thrilling tennis between the pair with the 20-year-old Sinner working wonders to blank out the noise surrounding Kyrgios and to play a consummate match.

Perhaps the Italian’s sang froid as clearly the better player on the day only irritated Kyrgios further as he launched a familiar war with the crowd, muttering at one changeover: “The crowd’s the worst, everyone’s just the worst.”

It was, to be fair to Kyrgios, a bit of a circus. One spectator even crashed the court to try to get a selfie, but succeeded only in adding fuel to the fire.

Being outplayed in the opening set tiebreak, Kyrgios turned his attack on Bernardes, telling him: “You have absolutely no idea how to control this crowd, pretty sad…”

When Kyrgios started talking further about him, Bernardes gave him his second code violation, which meant a point penalty for the Australian and put him set point down.

At the end of the set, Kyrgios screamed wildly at the umpire, asking how it could have been unsportsmanlike conduct as he was talking only to a friend in the crowd.

To which Bernardes, by now understandably growing more irritated, said: “You were talking about me.”

Kyrgios then smashed his racquet several times against his bag and on to the hard court. Bernardes this time awarded a game penalty against him – a decisive moment as the Australian was serving in that opening game of the second stanza and there soon looked no way back from there.

“I got frustrated,” Kyrgios said.

“Can I not get frustrated?”

It marked a dispiriting end to the Australian men’s singles challenge in Miami as, earlier, Thanasi Kokkinakis, who’d had such an excellent tournament, went out 6-4 6-4 to Alexander Zverev while suffering what appeared to be an injury to his right shoulder.

Despite their singles’ ills, Kyrgios and Kokkinakis teamed up later in the day to steamroll their way into the doubles semi-finals by dispatching third-seeds Marcel Granollers and Horacio Zeballos 7-5 6-2.