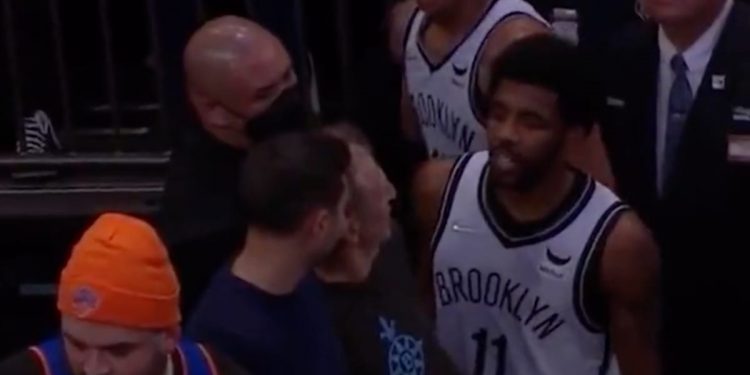 It’s been just over a week since Nets guard Kyrie Irving has been allowed to suit up for games in New York. Playing as a visiting player against the Knicks at Madison Square Garden on Wednesday, Irving got quite acquainted with the opposing fans.

As the two teams headed for the locker rooms for halftime, Irving halted course and confronted a fan seated in the front row. The two exchanged words, though it’s unclear what was said or what made Irving engage with the fan. Just before Irving turns back and starts toward the stands, it appears the fan takes a photo or video of Irving with his cell phone.

As Irving and the fan are talking, Nets forward Kessler Edwards stops on his way to the locker room to listen in on the conversation.

Brooklyn trailed New York, 67–50, at halftime, though used a huge second-half push to eventually win by 12. The Nets outscored the Knicks 38–16 in the fourth quarter to pick up their second victory in as many nights, winning by a final score of 110–98.

In 43 minutes, Irving scored 24 points with eight rebounds and seven assists on 9-for-26 shooting from the field.

Games Inbox: Why I’m getting an Xbox Series X instead of PS5