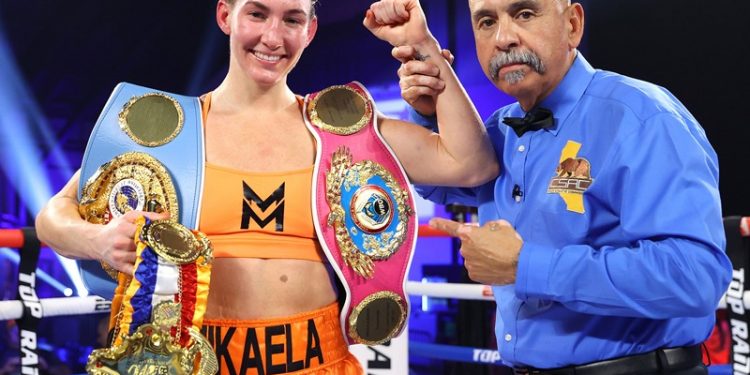 “I feel like I did a lot of good things in there,” said Mayer. “Her movement, I think, is what she does best, and it throws you off. (Han) gets her spacing in a little bit, so I had to throw her off and stay behind the jab.

“Coach Al {Mitchell} reminded me to stay behind the jab, set the right hand up. She would duck sometimes and make me miss. I started to go to the body. All in all, she’s a tough, durable opponent. That’s why we chose her for this fight. We knew she would push me, but I feel like I did well.” Mayer’s key weapons were hard left and right hooks to the head. Mayer landed a left hook to Han’s nose in round four, and blood began pouring down her face. Han’s corner did a good job keeping things under control, and Han remained in the fight. The situation seemed to light both women up. Mayer kept up the headshots and hurt Han repeatedly. Referee Ray Corona kept a close eye on the action as Mayer couldn’t miss with the hooks. But she wasn’t shutting down Han’s offense entirely. She hung tough, and she still had some offensive tools.

Mayer: ‘I wanted to get the stoppage’ Han was better prepared and in better condition than in her loss to Katie Taylor, or she wouldn’t have lasted so far into the bout. She doesn’t have the speed or power to threaten top talent like Mayer. Credit due for an honest effort that kept Mayer busy while waiting for the opportunity she really craves – and the fans ringside and watching on ESPN thoroughly entertained.

“I wanted to get the stoppage,” said Mayer. “I feel like I hurt her in the eighth round, almost finished her. This is another reason why I’m advocating for three-minute rounds.” Amen sister.

“I’ve been pretty clear that I want to go undisputed at 130. Baumgardner and Choi, I’ve been calling them out. I want (either) fight, but if they’re not going to give me that fight in a timely fashion, I’m game to go up and challenge the winner of (Amanda) Serrano versus Katie Taylor.”

Top Rank chairman Bob Arum was ringside and praised Mayer’s performance. “Mikaela Mayer is getting better and better. She is a generational talent in female boxing, and she will remain a leading figure for years to come.”

Coach Al Mitchell was a little tougher on Mayer, giving her a B-plus. We had her get her back behind the jab. She did everything we knew she was going to do. She got the win. That’s the most imp. But she made some mistakes. At this level, you’re going to make mistakes.” Mayer gave her trainer an A-plus.

Santillan Sizzles in Co-Main with Seventh Round TKO In the co-main event, welterweight Giovani Santillan of San Diego (29-0, 16 KOs) thrilled his many fans at The Hangar with a seventh-round TKO win over Jeovanis Barraza of Barranquilla, Colombia (23-3, 15 KOs). Santillan was a man on a mission from the opening bell. His work rate was relentless, with Barraza right in front of Santillan to be hit. The Colombian was tough but had nothing much else to offer. Referee Thomas Taylor conferred with Barraza’s corner round by round as Santillan continued to land body shots followed up by headshots nearly at will. In the seventh round, Taylor found the right time to step in and stop the one-way traffic at 33 seconds into the seventh.

“I am humbled by the support of my hometown, San Diego,” said Santillan. “Once again, they came out in force. They motivate me to do my best every time out there. I am going to keep working to earn a welterweight world title shot. I have a great team behind me, and when the time comes, I’ll be ready.”

Santillan is 30 years old and if he wants to be a player in the welterweight division, he needs to fight often and against more challenging opponents. He’ll always please fans if he fights like he did on Saturday, perhaps even better with some action coming back at him next time. Australian Andrew Moloney (22-2, 14 KOs) opened the main card against Gilberto Mendoza of Modesto (19-11-3, 10 KOs) and took care of his business as expected with a TKO win with just 31 seconds left in the eight-round bout. Mendoza suffered a cut in the crease of his right eye from a Moloney left jab in the third round, and it threatened to end the fight. Mendoza fought on, getting beaten to a pulp but not stopped, and it seemed he’d make it to the final bell. But Moloney landed a hard left hook to the body in combination, ending with the same left hook to the head. Mendoza stumbled but didn’t fall. Referee Jerry Cantu stepped in and called the fight at 2:29 of round eight. Why it wasn’t stopped earlier is a headscratcher; at this point, why not let the kid finish the fight?

Moloney gets another knockout on his record. He landed 47% of his total punches, three times as many as Mendoza. Brother Jason Moloney (23-2, 18 KOs) had no trouble over ten rounds from Francisco Pedroza Portillo of Tijuana (17-11-2, 10 KOs). Since his loss to Naoya Inoue, Moloney now has two wins and needs to keep busy and keep in front of the fans to earn another title shot. Luis Alberto Lopez (25-2, 14 KOs) remains the IBF top contender at featherweight with a fourth-round knockout of Raul Chirino (19-14, 12 KOs). “This was a win dedicated to my Latino fans. Next, I want the IBF world title shot. It’s that simple. Josh Warrington has the belt, and I’m coming for it,” said Lopez. Young US Olympians had a good night on the early undercard. Featherweight Duke Ragan of Cincinnati (5-0, 1 KO) shutout Diuhl Olguin of Guadalajara (15-22-5, 10 KOs) with three scorecards of 60-54. Flyweight Ginny Fuchs of Houston (1-0, 1 KO) had a memorable pro debut with a fourth-round knockout win over Randee Lynn Morales of Albuquerque (4-4, 2 KOs). Fuchs scored a first-round knockdown and eventually forced a referee stoppage in the fourth round of six planned. Floyd “Cash Flow” Diaz of Las Vegas (4-0, 1 KO) scored his first knockout win as a pro and made it a good one. The 18-year-old strafed Blake Quintana to the solar plexus with a right hand, dropping the stunned man to his knees, gasping for air. He wasn’t getting up, but referee Sharon Sands delivered a dramatic count to end the fight at 43 seconds of round four.