Lakeisha Patterson has added another Paralympic gold medal to her tally, with a last-gasp victory in the women’s S9 400 metres freestyle final in Tokyo.

It was one of six gold medals Australia won on day one, with four coming in the pool and two in track cycling.

Patterson held off a fierce challenge from Zsofia Konkoly — the Hungarian briefly took the lead on the last lap — to win the S9 400 metres freestyle final by just .08 of a second.

Then Ben Popham won the last event of the night, bursting into tears when his blistering finish gave him the men’s S8 100m freestyle gold.

Martin and Patterson won the first two swimming gold medals of the Games on Wednesday night at the Tokyo Aquatics Centre.

They emulated compatriots Paige Greco and Emily Petricola, who won the first two gold medals of the Tokyo Paralympics earlier at the Izu Velodrome.

Patterson won the S8 400 freestyle at the Rio Games and has since been re-classified to the S9 category.

Read more about the Tokyo Paralympics:

She took the early lead in her 400m freestyle final, as six-time Australian gold medallist Ellie Cole dropped off the pace and finished fourth.

A guide to Paralympic classifications 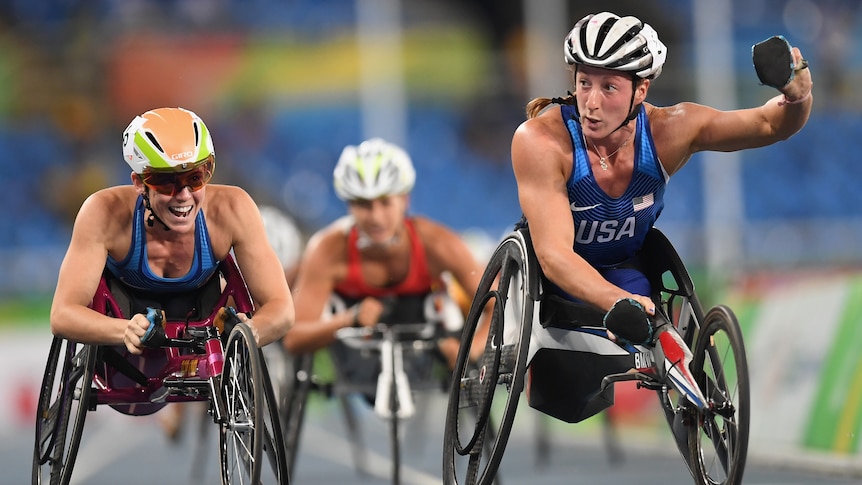 Ahead of the Tokyo Paralympics, we take you through the different classifications that cover every athlete and every sport at the Games — what they mean and how they work.

It came down to Patterson and Konkoly, who briefly took the lead on the last lap.

But Patterson rallied to touch the wall first in 4 minutes and 36.68 seconds, less than a second ahead of Konkoly.

“All I could do was attack it from the start and hold on … I knew I had it in me,” Patterson said.

Patterson also paid a tearful tribute to mum Sherryn on her birthday.

“It’s really hard being away from Mum today, but this is for you,” she said.

Crothers said a training partner in Australia had promised him a chicken parmigiana and a ginger beer if he won.

“I can’t wait for that when I get home,” Crowthers said.

Martin stunned his rivals in the 400m freestyle, going out fast in the finals and taking more than seven seconds off his heat time.

The 20-year-old Games debutant from Queensland won in a Games record time of 4:10.25, beating Ugo Didier of France by 1.08 seconds.

Ihar Boki, the Beast of Belarus, started his Tokyo campaign with gold in the men’s S13 100m butterfly.

Boki won six golds at the Rio Games, the most of any competitor, and he now has 12 Paralympic gold.

Some colleges mull the idea of ‘Ungrading’ for freshman students