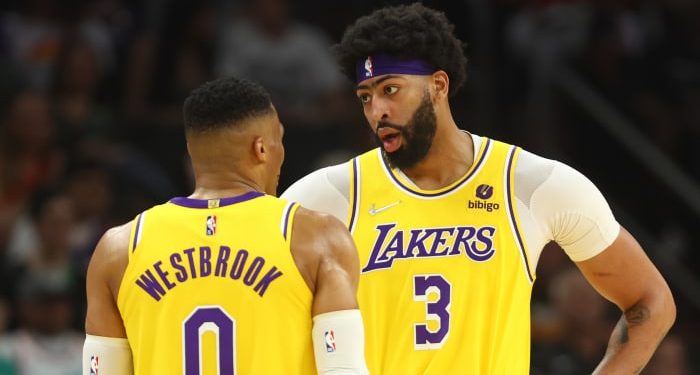 
For LeBron James and Anthony Davis, it was injuries.

“So many moving parts,” James said. “It was challenging for us.”

“Not to log enough minutes together,” said Davis, “that hurt us.”

For Russell Westbrook, it was his role.

Said Westbrook, “I just felt I was never given a fair chance to be who I needed to be to help this team.”

“Obviously,” said Pelinka, “our roster did not work.”

The Lakers faced the media Monday, a week after the team was eliminated from playoff contention and hours after a 33-win campaign, mercifully, came to an end. Yet as players unpacked what went wrong in a lost season, you wondered what exactly they were seeing.

Were injuries an issue? Sure. Davis missed 42 games. James sat out 26. Kendrick Nunn, whom the Lakers anticipated playing a significant role, didn’t play a minute. The trio of James, Davis and Westbrook played 21 games together. “I played more with my high school teammates,” James said. L.A. cycled through 41 different starting lineups. Toward the end, the ones featuring James and Davis were hobbled.

Said James, “At the end of the day, the reason we were not very good together is because we weren’t on the damn floor together.”

But the Grizzlies lost Ja Morant for 25 games this season. Memphis went 20–5. Phoenix played without Chris Paul for 17 games. They went 11–6. Jamal Murray didn’t play a minute for Denver. Same for Ben Simmons in Philadelphia. Miami used 23 different starting lineups. The Heat will enter the playoffs as the top seed in the Eastern Conference.

Injuries happen. The Lakers weren’t good this season because the Lakers core isn’t good anymore. Not together, anyway. L.A. went 11–10 in games James, Davis and Westbrook played in. That’s a 43-win pace. In 393 minutes together, the Lakers’ three stars had a negative net rating (-3.5). Playing alongside James and Davis, Westbrook looked lost. When reminded that James and Davis often said the Lakers should “let Russ be Russ,” Westbrook said, “that wasn’t true.” Asked if he ever felt like himself, Westbrook replied, “very rarely.”

Westbrook’s remarks on Monday were revealing. He said he spent most of the season “just trying to find my way.” He took exception to his reception from fans. He cited “made-up stories” about his relationship with coaches and staff and how “having to fight against that constantly is part of not [being given] a fair chance.” He admitted to a strained relationship with Vogel, feeling that he constantly had to prove himself to the Lakers coach. “I’m not sure what his issue was with me,” said Westbrook. “I’m not sure why we never really connected. That’s something he has to answer.”

He will, though not as Lakers coach. Vogel was fired Monday. Rob Pelinka made it official, a day after the team humiliated Vogel by allowing him to be ambushed by an ESPN report of it. Pelinka offered no apology, saying Vogel was “factually heard about our decision in an in-person meeting this morning.” Nor did he offer a specific reason for dismissing the coach who, just 18 months earlier, led the Lakers to a championship.

“Today’s not going to be a day of finger pointing or unwinding the specific reasons,” Pelinka said. “We just felt, organizationally, at the highest level, that it was time for a new voice.”

But who? Three years ago the Lakers, armed with an ex-MVP in James and an emerging one in Davis, failed to lure Tyronn Lue or Monty Williams to the L.A. bench. This search could prove more challenging. Brad Stevens isn’t going to Los Angeles. Nick Nurse, who reportedly still has several years remaining on his contract in Toronto, feels like wishful thinking. Doc Rivers? Maybe. Quin Snyder? There’s a connection to the organization and Snyder could be on shaky ground with the Jazz. Mark Jackson? Yikes.

Upgrading the coaches’ box will be difficult. Upgrading the roster, at least to a championship level, could be impossible. Pelinka acknowledged the urgency to build a winner around James, who will be 38 next season. “We need to do all we can to be caretakers of his legacy,” said Pelinka. But how? The Lakers have zero cap flexibility. The next draft pick they can trade is in 2027. Westbrook will pick up a $47 million player option in the next few weeks and Pelinka may have to attach that pick—and more—to offload him. Trading Davis is an option, though after an injury-riddled season, and with his 30th birthday just around the corner, his value isn’t what it used to be.

The Lakers will need to be creative. The front office badly needs an infusion of basketball brain power. Pelinka is a basketball lifer. But on Monday he named Kurt Rambis, Joey Buss and Jesse Buss as key figures in the rebuilding process. Rambis, whose influence in Laker land remains one of the NBA’s most mystifying stories, has no business wielding power within an NBA organization. The Busses are there because of their last names. Meanwhile, team owner Jeanie Buss is still taking advice from Magic Johnson while reportedly getting input from Phil Jackson.

James declined to wade into team personnel Monday but his decisions the next few months will dictate how it plays out. James is extension-eligible this summer. “I came here to win a championship,” James said. “I want to win more.” Tacking a couple more years onto his contract would make the Lakers more comfortable with dealing away future first-round picks. Refusing to could make L.A. more reluctant, which would weaken the Lakers’ ability to significantly overhaul the roster.

“The front office is going to do whatever it takes to make this ball club become a better ball club,” James said. “Top to bottom. They ask me my opinion, I’ll give my opinion. But at the end of the day they are going to make the decisions that are best for the franchise. It’s my job to make sure I’m ready at the start of training camp and lead the team that’s been put on the floor.”

The Lakers face a challenging offseason.

“We have been in this place before,” said Pelinka.

More NBA coverage:
• NBA Awards: Official Picks for MVP, ROY, and More
• All of Your NBA MVP Takes Are Wrong
• NBA Play-In Primer: One Big Question for Each Opening Matchup

CMT Music Awards 2022: Carrie Underwood soars above the stage as she leads the performances