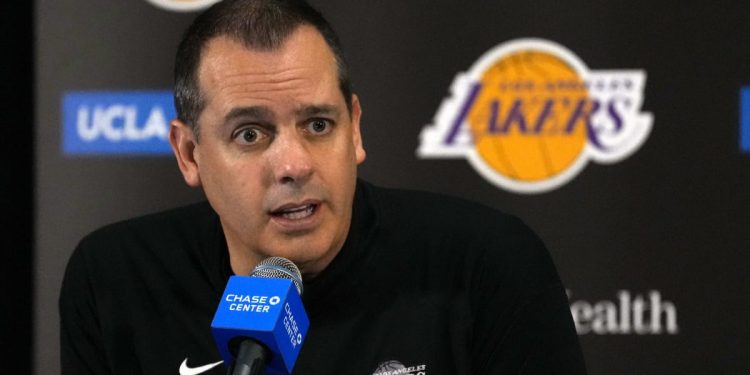 The Lakers apparently aren’t wasting any time in moving on from their disaster of a season.

Within minutes of Los Angeles finishing its final game of the season Sunday night, a largely meaningless win over the Nuggets, ESPN’s Adrian Wojnarowski reported that would be the final game Frank Vogel coached for the franchise. The Lakers will now reportedly embark on a “lengthy and expansive” search for the next coach to work with LeBron James and whichever other Lakers are still on the roster next season.

When asked in Sunday’s postgame press conference about Wojnarowski’s report, Vogel said, “I haven’t been told s—,” according to The Athletic’s Jovan Buha.

Los Angeles finished its season 33–49, its worst season since 2016-17, finishing one game behind the Spurs for 10th place in the Western Conference and the final spot in the play-in tournament.

If this is it for Vogel, he ends his Lakers tenure with a 127–98 record. In his first season with the team, he guided Los Angeles to a championship in the COVID-19 bubble in Orlando during the 2019-20 season. But the Lakers lost in the first round of last year’s playoffs and failed to qualify at all for the postseason this time around.

Last Recollection Has Been Trademarked By Bandai Namco In Europe, Japan

Last Recollection Has Been Trademarked By Bandai Namco In Europe, Japan