Lakers’ Rob Pelinka vows to make adjustments ‘to be better’ 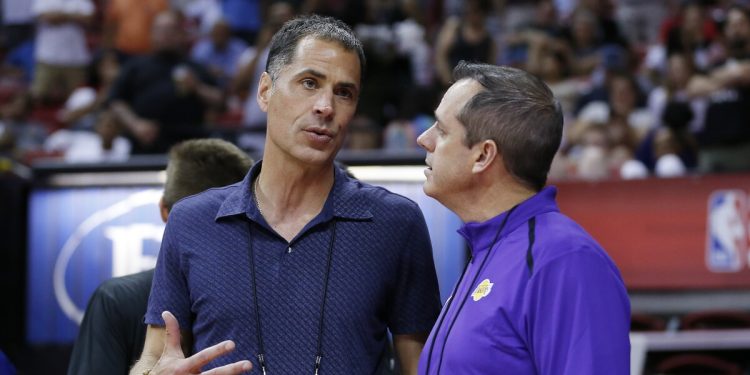 “I want to thank him for three really strong years,” Pelinka said, wishing Vogel and his family well in the future. “Frank is a great man, a great coach.”

He then talked about how disappointing the Lakers’ 33-49 season had been, sharing blame with the players and coaches.

“This was a disappointing Lakers season at every level,” Pelinka said. “In the face of disappointment, our fans expect more, and that’s at every facet. It starts with the front office led by me and our ability to construct the right roster. It starts with the coaches holding players accountable and making sure that there is on-court execution. It goes to our training staff doing everything they can to make sure we have healthy bodies on the court. And it goes to our players to play at … with on-court execution at the highest level because that’s what Lakers fans expect and deserve from all of us.

“I think when you have disappointment, you need to take ownership of that and vow to make adjustments to be better. And that’s where the work starts today. We have exit interviews with every player, so we get a chance to get their thoughts and really reflect on ways that we can be better across the board.”

“We’ve been in this place before and we know what it takes to put in the work to fix it and that’s where our energy and time will be spent in the coming days.”

Pelinka admitted that the players assembled for this season “did not work.” When asked why firing Vogel was the first change to be made, Pelinka responded:

“Today is not going to be a day of finger-pointing or unwinding all the specific reasons. We just felt organizationally at the highest level it was time for a new voice and those decisions are made at the very top level in a very collaborative way with our basketball operations department and ultimately with Jeanie [Buss] …and the leaders of our organization.

“We just felt like it was time for a new leader and that’s why we made the decision today that we did.”