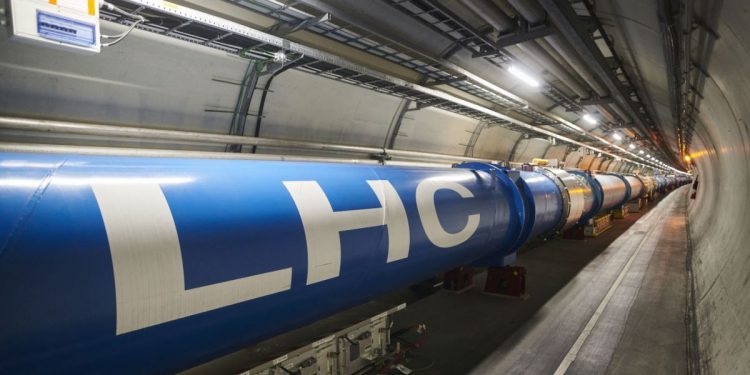 The LHC, located at CERN near Geneva, Switzerland, restarted on Friday (April 22) after a planned, three-year hiatus during which a number of upgrades were made to the facility. These improvements are already being put to the test and, in restarting and preparing for its new operating phase, called Run 3, the LHC has already beaten a previous record.

This particle accelerator is both the largest and most powerful in the world. And, in a test run conducted shortly after being switched back on, the LHC accelerated beams of protons to a higher energy than ever before.

“Today the two #LHC pilot beams of protons were accelerated, for the first time, to the record energy of 6.8 TeV per beam. After #restartingLHC, this operation is part of the activities to recommission the machine in preparation of #LHCRun3, planned for the summer of 2022,” CERN tweeted today (April 25).

Related: The Large Hadron Collider will explore the cutting edge of physics after 3-year shutdown

Today the two #LHC pilot beams of protons were accelerated, for the first time, to the record energy of 6.8 TeV per beam. 🎉 After #restartingLHC, this operation is part of the activities to recommission the machine in preparation of #LHCRun3, planned for the summer of 2022. pic.twitter.com/8NZ6nNJSVfApril 25, 2022

The LHC works by accelerating two beams of particles like protons towards each other. These high-energy beams collide, allowing particle physicists to explore the extreme limits of our physical world and even discover aspects of physics never seen before.

With the upgrades implemented during the planned shutdown, the energy of the LHC’s proton beams was set to increase from 6.5 teraelectronvolts (TeV) to 6.8 TeV. For reference, one teraelectronvolt is equivalent to 1 trillion electron volts and, in terms of kinetic energy, is roughly equal to the energy of a mosquito flying. While this might seem like a very small amount of energy, for a single proton it is an incredible amount of energy.

The LHC facility is used to explore cosmic mysteries ranging from investigating possible candidates for dark matter to completely breaking apart our understanding of physics. Now both switched on and working as intended with the new upgrades, the LHC is well on its way to enabling a new round of groundbreaking physics research.