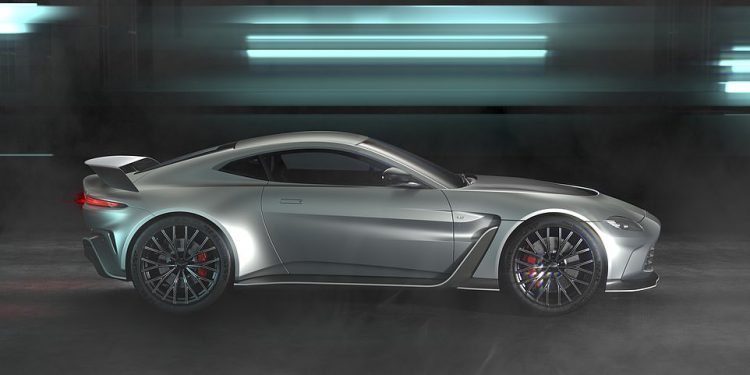 
Aston Martin has bid a last hurrah to its V12 Vantage as the gutsy 200mph gas-guzzler accelerates to the end of the road in spectacular style with the most powerful example ever.

Bosses at James Bond’s favourite car company said it would ensure the pocket rocket supercar ‘goes out on the highest of highs’.

The British supercar-maker is producing a limited run globally of 333 new V12 Vantage cars priced from around £270,000 – and all have already been sold out to eager buyers and collectors following ‘unprecedented demand’.

However, a generous option list of extras could easily tip final bills to over £300,000. Early production is getting underway with first deliveries set to begin this summer. 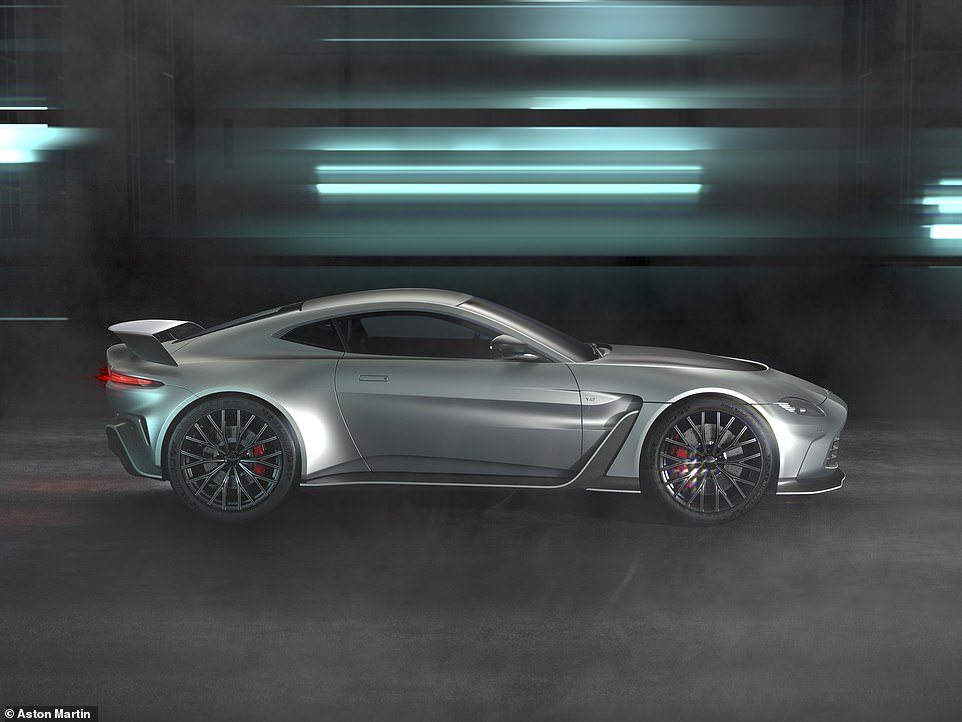 Going out on the highest of highs: Feast your eyes on the new 2022 Aston Martin V12 Vantage – the last version of the iconic nameplate to get a 12-cylinder powerplant

The last of the line model is a 700 horsepower 5.2-litre twin-turbo V12 Vantage linked to an eight speed automatic gearbox that accelerates from rest to 62mph in 3.4 seconds and up to a top speed of 200mph.

Aston Martin bosses say this is ‘the most powerful Vantage ever’.

The British firm, based at Gaydon in Warwickshire, said the turbo-powered two-seater celebrates ‘a spectacular finale for an iconic bloodline’ and marks the final time a V12 will be fitted to the popular Vantage nameplate.

It comes as the Government plans to outlaw pure petrol and diesel cars from 2030, with some unspecified hybrids allowed until 2035, as part of its drive towards zero-emissions electric cars.

The new V12’s two-door body style features a dramatic new wide-body design that accommodates 40mm increase in track width (the distance between the two wheels at each end of the car). 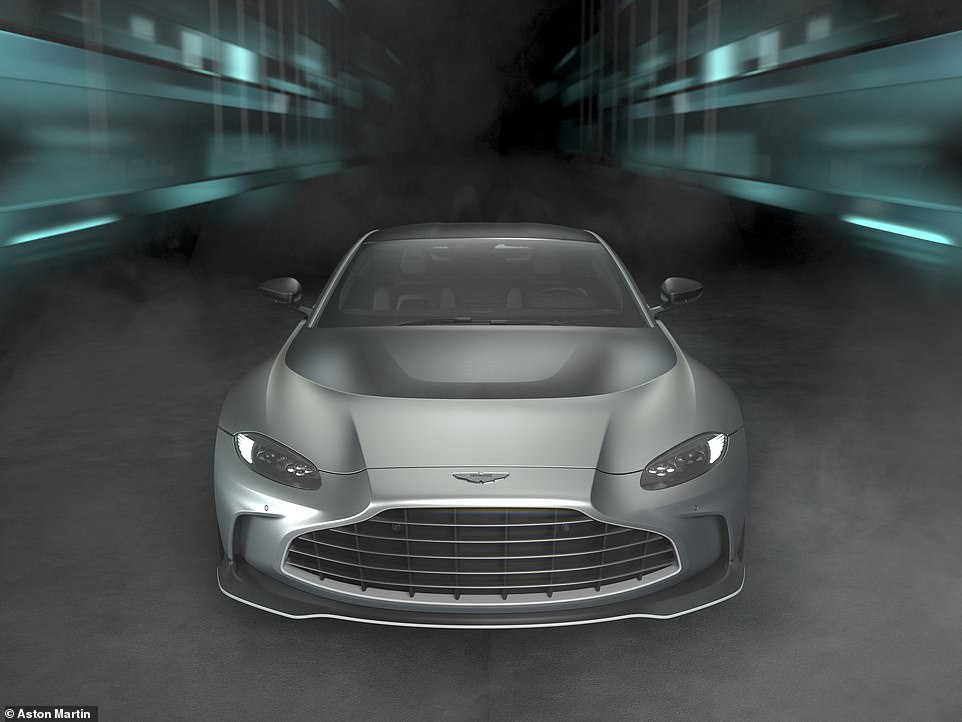 The British supercar-maker is producing a limited run globally of 333 new V12 Vantage cars priced from around £270,000 – though most will cost in excess of £300k with options added 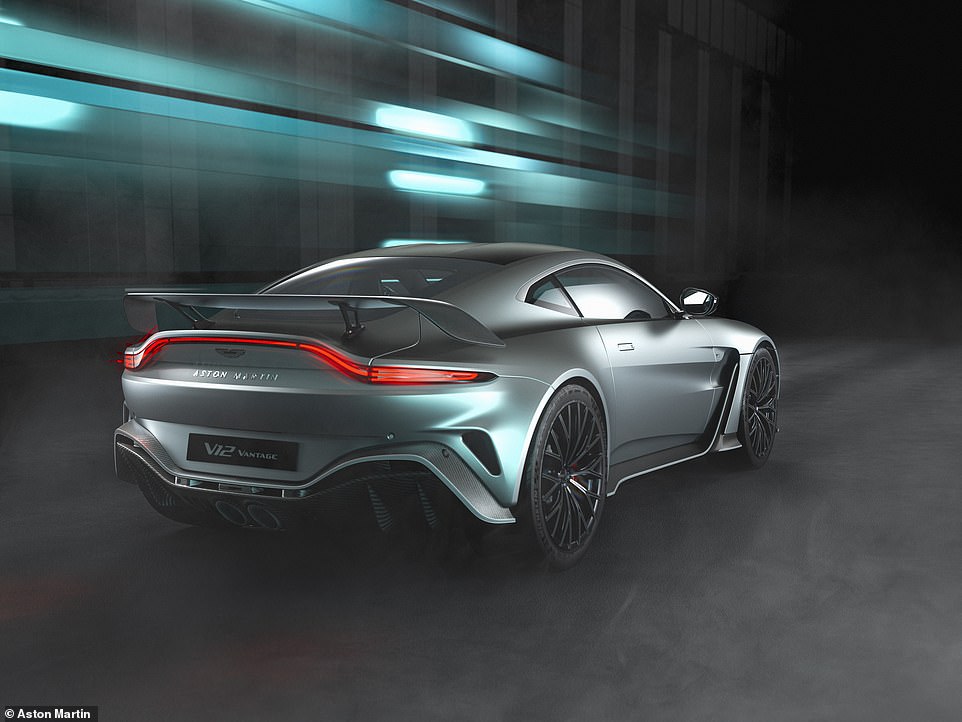 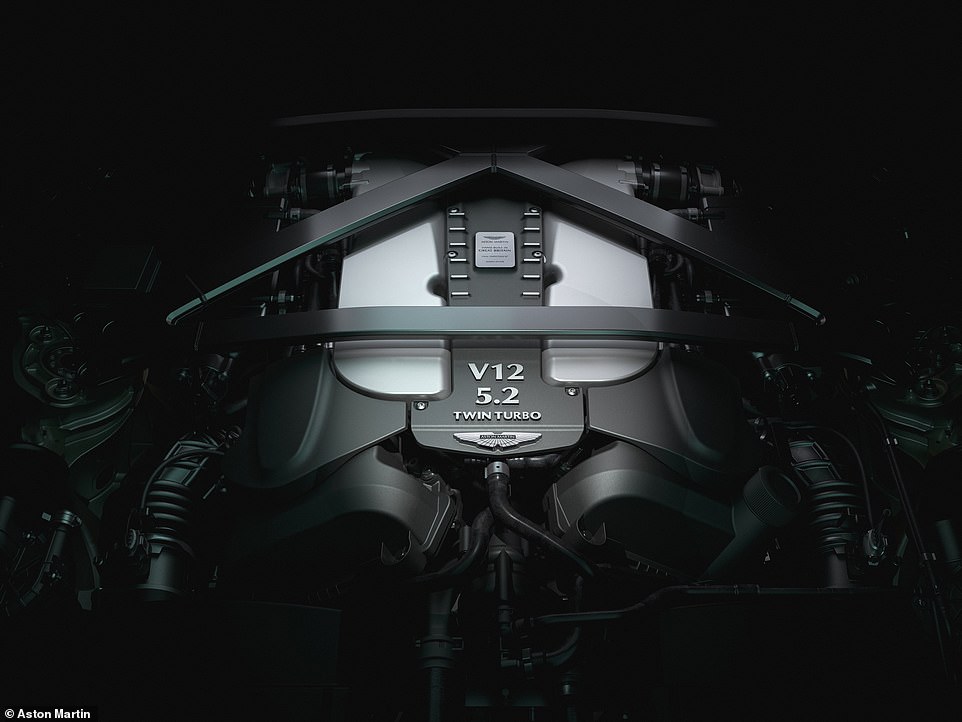 The last of the line model is a 700 horsepower 5.2-litre twin-turbo V12 Vantage that accelerate the sports car from rest to 62mph in 3.4 seconds and up to a top speed of 200mph. Aston Martin bosses say this is ‘the most powerful Vantage ever’

‘With this unique lineage nearing its end, Aston Martin is proud to introduce the fastest, fiercest and most dynamically accomplished of them all; the new V12 Vantage.’

It added: ‘With production of the V12 Vantage strictly limited to 333 examples globally, this final edition celebrates the end of an epic era in fitting style.’

Aston Martin said the new and final V12 Vantage was ‘the ultimate expression of extreme performance and driver-focussed thrills’.

It had been created ‘to mix blistering straight-line speed and scintillating handling with spectacular looks and enviable exclusivity’.

The combination of the powerful engine and lightweight materials means the V12 Vantage has a power-to-weight ratio of 390 horsepower-per-ton – an increase of more than 20 per cent compared to the V8 powered Vantage. 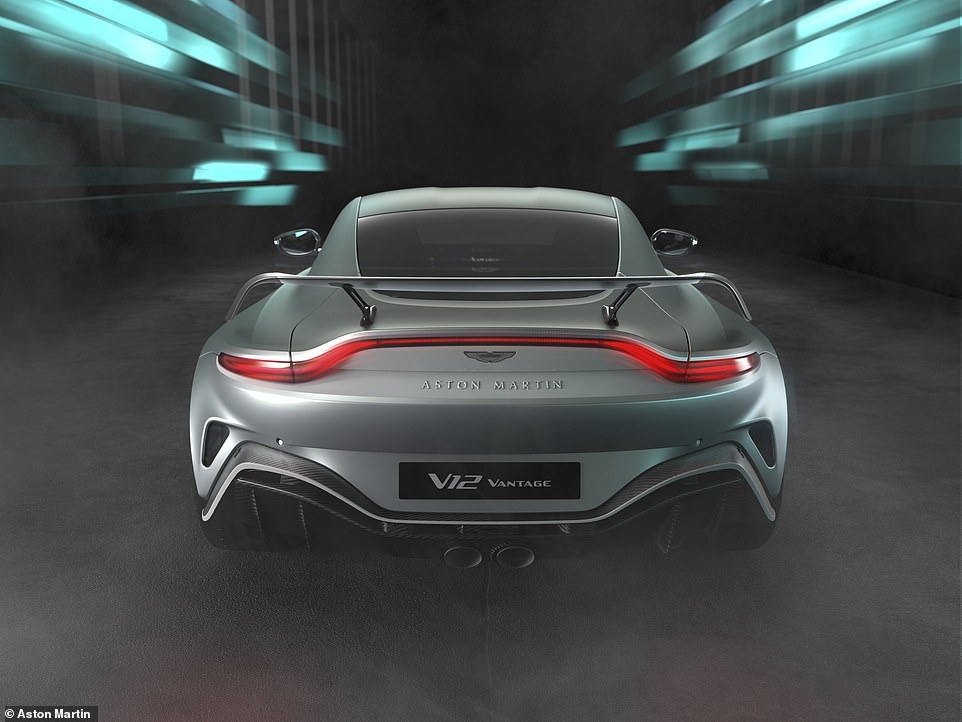 A special centre-mounted twin-exit exhaust system – made from lightweight 1mm stainless-steel that saves 7.2kg – has been tuned’ to ensure the V12 Vantage has a voice to match its looks and performance’, say bosses 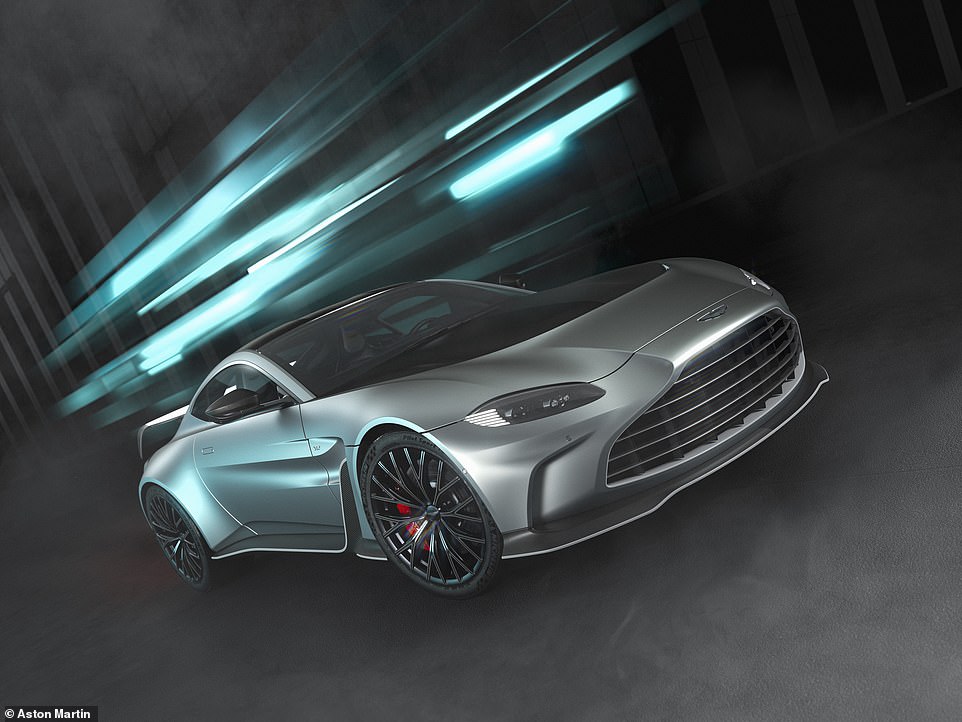 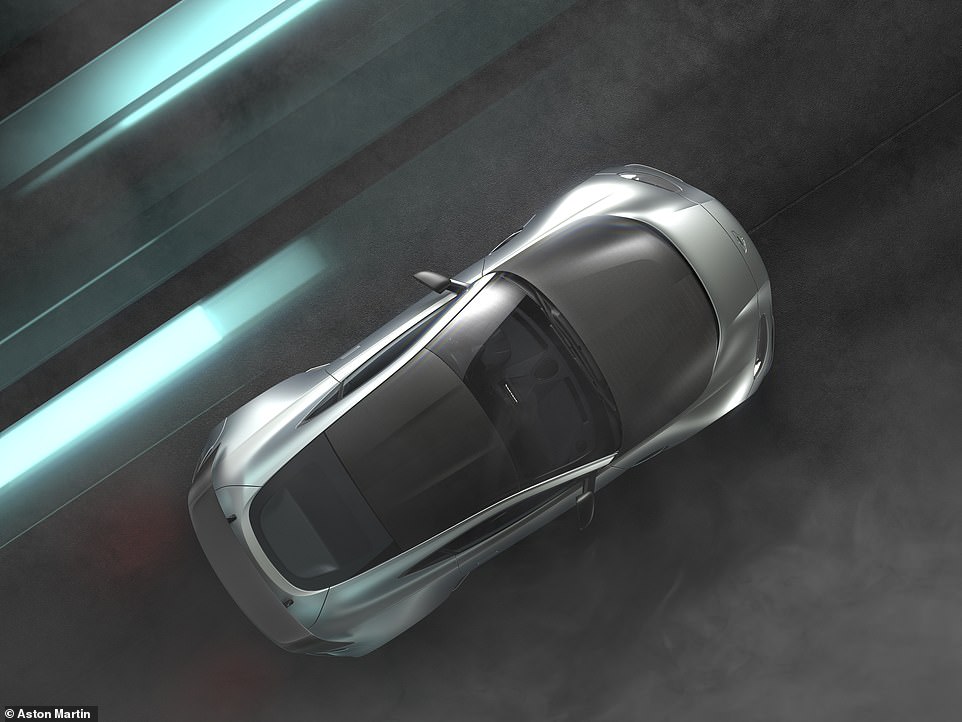 A special centre-mounted twin-exit exhaust system – made from lightweight 1mm stainless-steel that saves 7.2kg – has been tuned’ to ensure the V12 Vantage has a voice to match its looks and performance’.

The car is equipped with a new adaptive damping suspension system including new anti-roll bars, bushes, and spring and damper assemblies.

Will it fit in my garage? New Aston Martin V12 Vantage

Stopping power is boosted with a carbon ceramic braking system as standard – saving 23kg of weight compared to steel brakes.

The carbon ceramic discs maintain consistent braking performance at high temperatures and have been engineered to resist brake fade at temperatures up to 800 degrees.

It says: ‘This helps the V12 Vantage unleash its full performance potential while giving the driver maximum confidence and precise control.’

In terms of styling, Aston believes the V12 Vantage’s aerodynamic shape with extensive use of carbon fibre creates ‘a jaw-dropping physique’ with more aggressive, wider, bodywork.

It has a new front bumper design and a full width front splitter which generates extra downforce and aerodynamic balance, as well as creating a ‘ground-skimming’ stance.

The front grille is 25 per cent larger to boost air flow through the engine-cooling radiators. There’s also a distinct ‘horse shoe’ design engine vent integrated into the bonnet.

A dramatic rear wing contributes to a maximum downforce of 204kg at top speed and adds to the V12 Vantage’s visual impact. However, owners wanting more subtle styling with a sleeker silhouette can delete the wing.

A supportive new carbon fibre performance seat with exposed twill carbon fibre shell and manual six-way adjustment is available as an option. Each V12 Vantage can also be individually tailored through the ‘Q by Aston Martin’ personalisation service.

Other tweaks include striking exterior graphics and liveries; coloured brake callipers; painted wheel finishes; and carbon fibre tinted lacquers which under bright light ‘transform the car with a jewel-like glisten’. 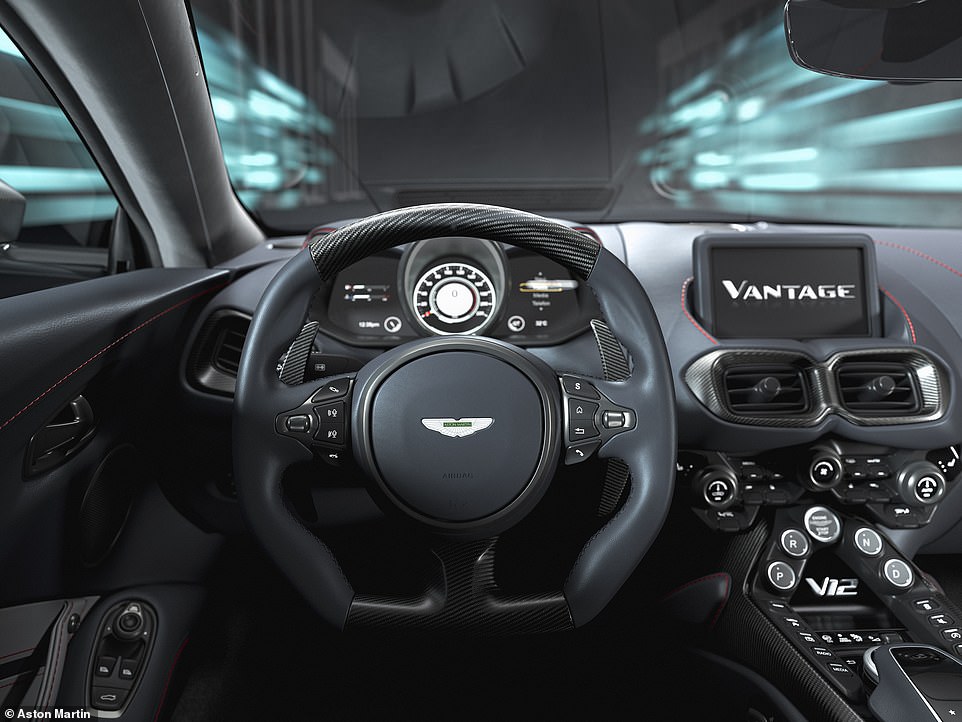 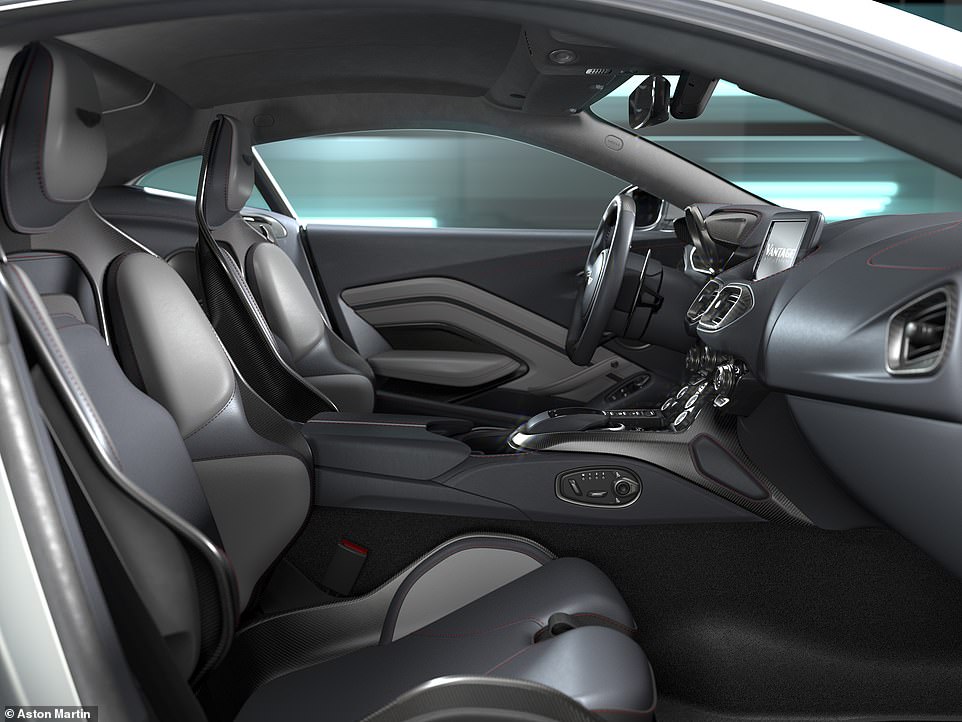 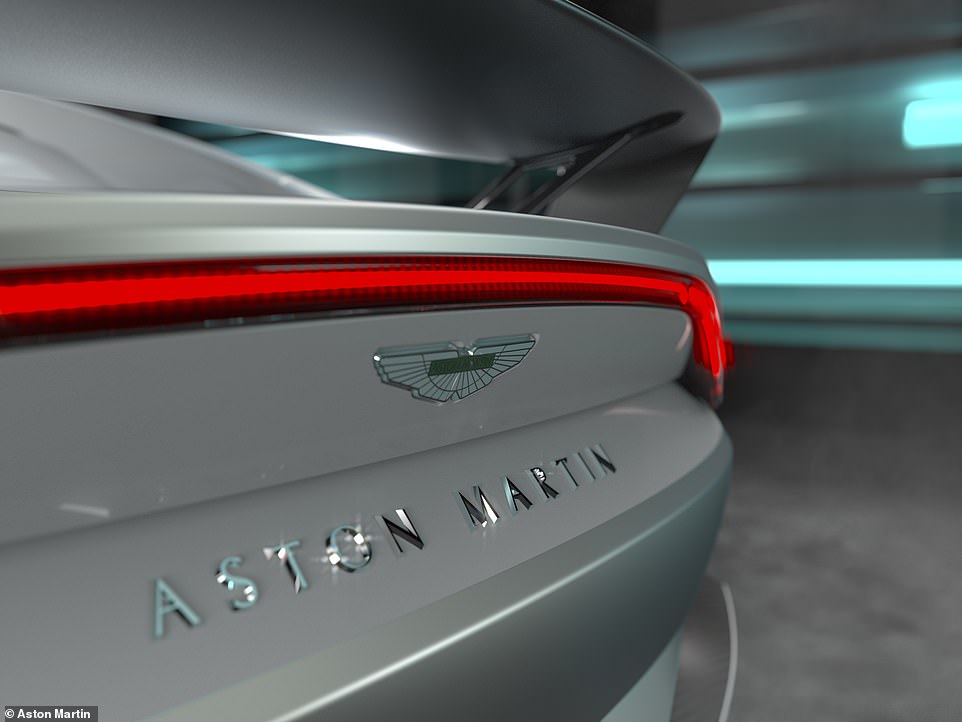 The final V12 Vantage: ‘A celebration of its forebears and an embodiment of Aston Martin’s intensifying focus on driving dynamics, it ensures the V12 Vantage goes out on the highest of highs’, Aston Martin said

Options inside the car include woven leather or Alcantara seat inserts, trim inlays and specially coloured anodised rotary dials in the centre console. ‘With so many design combinations available, it would not be a surprise to see no two cars the same,’ says Aston.

Marco Mattiacci, Aston Martin global chief brand and commercial officer said: ‘Such is the level of bespoke personalisation available via ‘Q by Aston Martin’ even a car as rare as the V12 Vantage can be made to a specification completely unique to its owner’.

Announcing the final send off, Aston Martin chief executive Tobias Moers said: ‘Every great sports-car brand has a hero car. For Aston Martin in more recent years that car has been the V12 Vantage.’

He noted: ‘Right from the moment the first V12 Vantage RS Concept was shown back in 2007 our customers and fans around the world fell in love with the idea of fitting our biggest engine into our smallest and most sporting model.’

That recipe has been refined over the years with great success, said Mr Moers, but added: ‘Now it is time to bring this bloodline to a close, fittingly with the most spectacular example yet – the fastest, most powerful and most dynamically capable V12 Vantage ever.

‘A celebration of its forebears and an embodiment of Aston Martin’s intensifying focus on driving dynamics, it ensures the V12 Vantage goes out on the highest of highs’.

Aston Martin has chosen a dozen highlights spanning the V12 Vantage’s spectacular 15-year evolution since 2007 – bringing it right up to date. 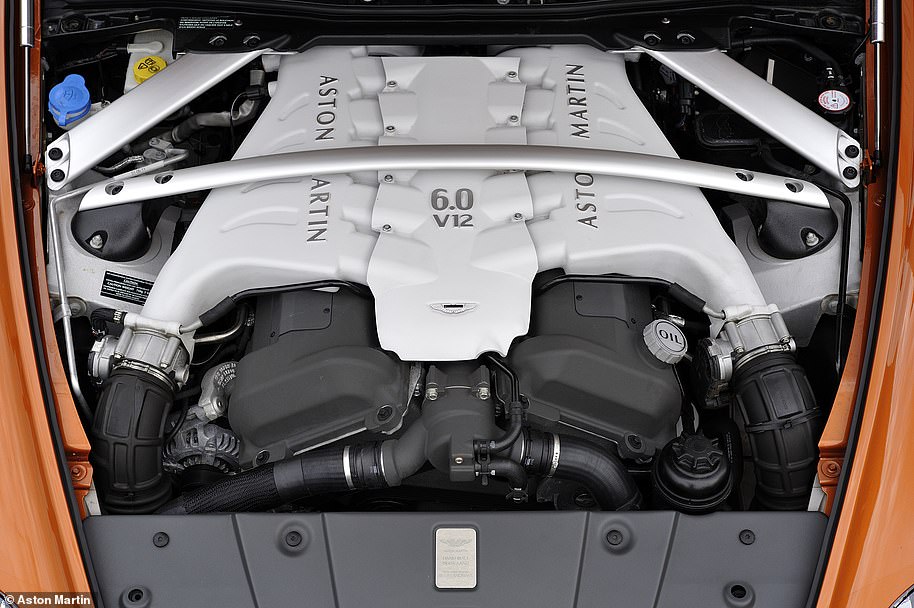 Unveiled in December 2007 at Aston Martin’s Gaydon headquarters during the opening of the new Design Studio.

Aston Martin’s then CEO Dr Ulrich Bez, said: ‘If there is sufficient demand then we will seriously consider a low volume production run.’

Within 24 hours Aston Martin dealers reported a flood of calls. 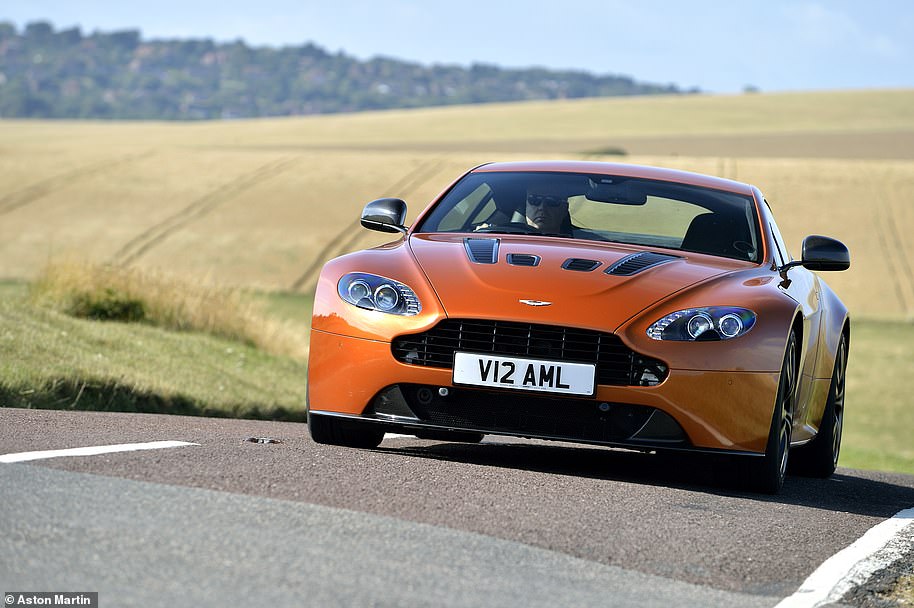 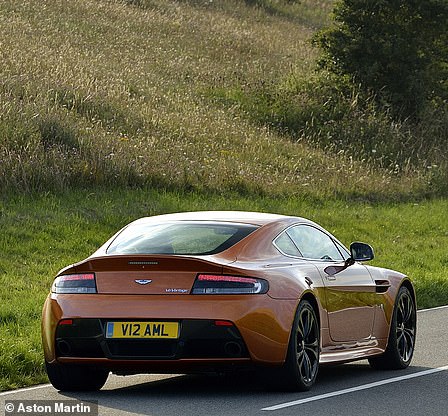 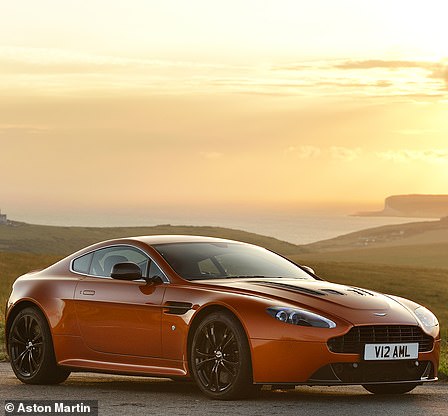 Deliveries of the £135,000 production V12 Vantage commenced later in 2009 with a 6.0-litre 510bhp V12 squeezed beneath the bonnet and linked to a six-speed manual transmission

After its world debut at the Geneva Motor Show in March 2009, deliveries of the £135,000 production V12 Vantage commenced later that same year with a 6.0-litre 510bhp V12 squeezed beneath the bonnet and linked to a six-speed manual transmission.

As part of its launch in late May, Aston Martin entered a near-standard bright blue V12 Vantage in the fearsome Nürburgring N24 endurance race in Germany, The four-driver line-up, which included then Aston Martin’s CEO Dr Ulrich Bez and chief engineer Chris Porritt, secured an historic win in the SP8 class and 21st overall from 170 starters.

Renewing a collaborative association that began with the DB4 GT Zagato in 1960, in 2011 Aston Martin revealed and raced two V12 Zagato concepts before announcing a limited run of road cars at that year’s Frankfurt Motor Show.

The V12 Zagato was a labour of love with Aston Martin’s craftspeople lavishing some 2000 hours (five times longer than the regular V12 Vantage) on building each car – a fact reflected in the price, which was about double that of the V12 Vantage.

Almost five years after the V12 Vantage was first seen as a concept, Aston Martin released the rare V12 Vantage Roadster featuring the 510bhp engine and again only available with a manual transmission. Just a 101 were built.

An instant favourite with professional and amateur drivers alike, the V12 Vantage GT3 enjoyed a racing career spanning seven seasons, scoring 22 wins, 26 pole positions, 63 podiums and four driver championships making it one of the most successful GT3 cars in history.

Built to celebrate Aston Martin’s centenary, the sensational CC100 made its debut at the 2013 Geneva Motor Show. Based on the yet-to-be-launched V12 Vantage S, the CC100 was built by Aston Martin’s in-house Q Division. Just two examples were built – both finished in Alloro Green. 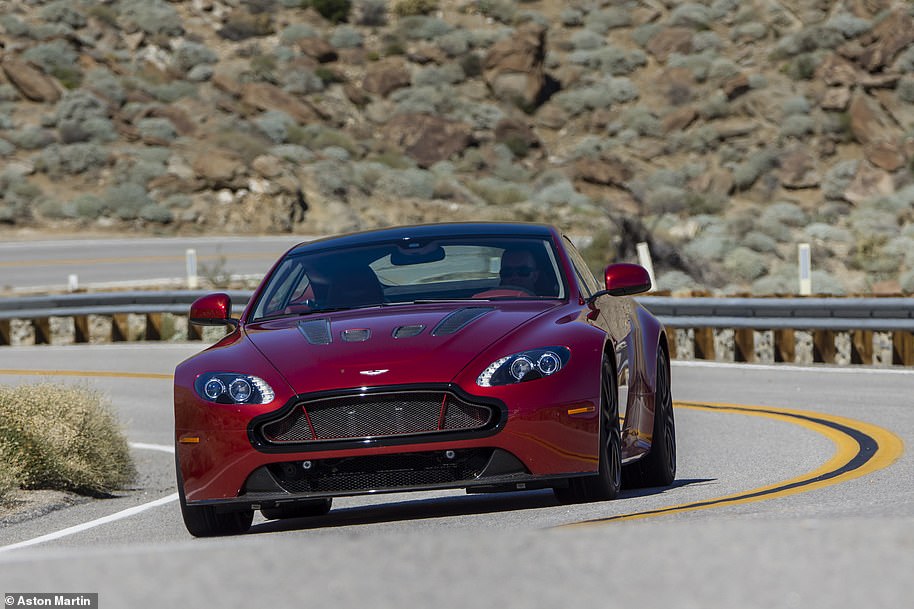 This is the Aston Martin Vantage S, which had a top speed of 205mph and made it the fastest series production Aston Martin yet built 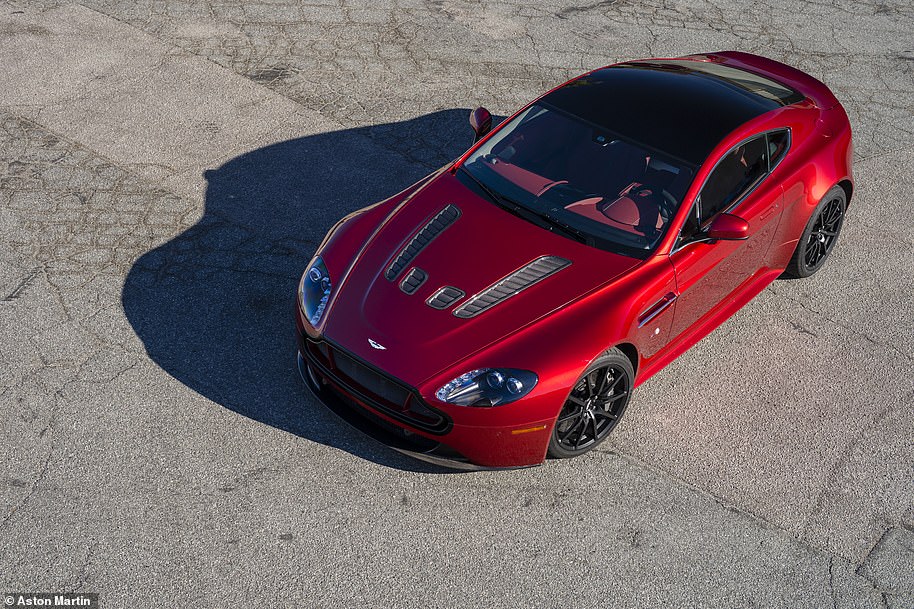 Its top speed of 205mph made the 565bhp V12 Vantage S the fastest series production Aston Martin yet built.

With its 50mm wider carbon fibre bodywork and race-influenced aero package the GT12 was the most aggressive and dynamically focused V12 Vantage ever made and imited to just 100 examples.

Launched in the summer of 2017 to coincide with that year’s Le Mans 24 Hour race, this special edition model was limited to just 100 examples of Coupe and Roadster. A Performance Pack increased maximum power by 30bhp to a GT12-matching 592bhp. A special Union Jack Aston Martin ‘wings’ badge was a no-cost option.

Built under the codename ‘Project Dreadnought’, the V600 began life as a one-off customer commission but turned into a limited run divided evenly between seven Coupes and seven Roadsters priced at £1.2m each..

Aston Martin said: ‘Like all great thrillers, the final chapter is always the most exciting. You’ve heard about it. You will certainly hear it coming.

‘It’s not just a Limited Edition, it’s a Final Edition’.

Meg Lanning unbeaten as Australia marches on against South Africa