Lateral flows missed up to 80% of Covid-infected people, study suggests 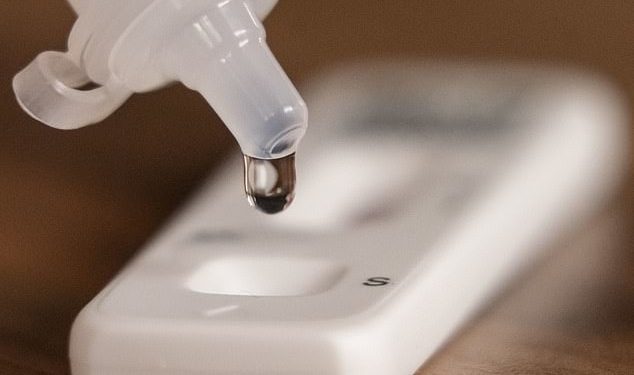 
Lateral flow tests for Covid miss up to eight in ten infections, an analysis has claimed.

Birmingham University researchers used modelling based on real-world data to suggest the swabs were up to 10 times less effective at detecting the virus than official statistics suggest.

It bolsters the Government’s decision to scrap free swabs from April 1, with ministers saying Omicron was mild enough for them to drop the measure.

But the axing of the scheme has already led to a high street pricing war over lateral flow kits, with Lloyds now marketing them for £1.89 each — 25 per cent cheaper than the most expensive in Boots.

Lateral flows have formed the ‘cornerstone’ of Britain’s testing strategy, with ministers spending more than £7billion on the devices so far.

There has been debate over their sensitivity, with studies warning they are worse at detecting Omicron when people are most infectious than with other variants. 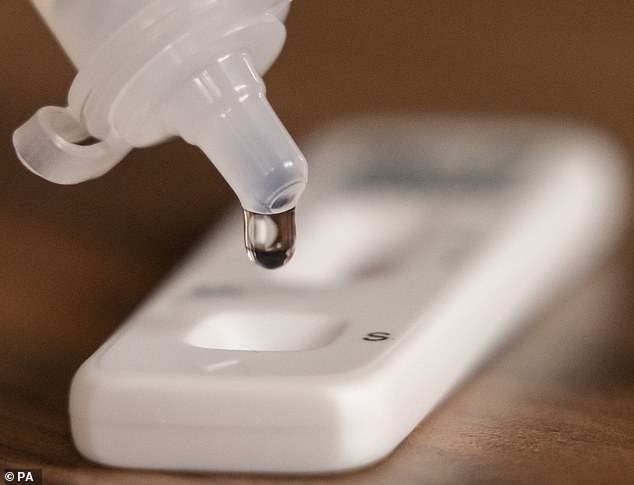 They included 5,800 people who received both swabs during the UK’s first mass testing pilot in Liverpool over November 2020.

Of these, 70 tested positive using lateral flow devices but 74 were found to have the virus by PCRs.

They also looked at 7,000 students tested with lateral flows at their university before going home for Christmas in 2020, which spotted two cases confirmed by PCRs.

A tenth of these students were also re-tested using PCRs, which revealed another four cases that had been missed.

How to do a rapid lateral flow test

Rapid lateral flow tests are for people who do not have Covid symptoms, such as a high temperature, a cough or a loss or change to smell or taste.

The tests give a quick result using a device similar to a pregnancy test.

People with Covid symptoms should do a PCR test.

Before doing a rapid lateral flow test the NHS advises:

If your test requires a throat swab:

If your test requires a nose swab only:

Modelling using these figures suggested lateral flows were missing 81 per cent of infections among students.

They also failed to spot 29 per cent of infections in mass testing schemes, and 20 per cent of cases when used at NHS testing sites.

For comparison, official estimates suggest they miss just 32 per cent, 10 per cent and eight per cent of cases in each respectively.

Government modelling is from the London School of Hygiene and Tropical Medicine, which based its estimates on the amount of virus someone is shedding when they take the test.

This differs from the University of Birmingham research, which used real-world data on positives detected by lateral flows compared to PCRs.

Experts previously warned lateral flows are likely to be less reliable when used by the public because people swabbing themselves at home are more likely to use the tests incorrectly.

Lateral flow test critic Professor Jonathan Deeks from the University of Birmingham led the study, alongside experts from Imperial College London and Oxford.

In the paper, they wrote: ‘Until new generation LFTs are available that meet the regulatory performance requirements, negative test results from lateral flow tests cannot be relied on to exclude current infection.

‘Policy makers need to ensure that the public are aware of the risks of being infectious despite testing negative.

‘Tests (should not) be used in situations where the consequences of false negative results are considerable.’

Part of ‘Operation Moonshot’, it was a key moment in the pandemic with everyone now able to get tested and find out whether they were infected within 30 minutes.

The tests were rolled out in part to reach people that would normally have got tested for the virus.

But some experts raised concerns they could spread the virus further, by wrongly giving infected people the all-clear.

Ministers said this week that they would be abandoning free lateral flows and PCRs from April 1 — which are currently costing £2billion a month.

Announcing the change, Boris Johnson argued it was possible because the Omicron variant was milder than other strains and that the cost was now difficult to justify.

But the move has triggered a battle on the high street, with LloydsPharmacy today revealing it will undercut rival chains Superdrug and Boots to offer Covid swabs for as little as £1.89 each.

Boots yesterday became the first retailer to announce it would sell lateral flow tests, offering the swabs from £2.50 each today.

Superdrug then this morning said it would sell the swabs at a lower price of £1.95 each, with a pack of five costing £9.79.

Now LloydsPharmacy, which has 1,500 stores dotted across Britain, has started to offer five tests for the price of £9.49 on its website.

Waitrose and other major retailers have started talks with the Government over supplying paid-for tests once the rule changes come into play and force millions who wish to continue testing to fork out for kits.

But politicians, health experts and patients’ rights groups have all raised concerns the private sector could start cashing in on swabbing, arguing for a price cap to be put in place.

There are already cost limits in Spain, France and Portugal, with the Spanish Government setting a ceiling of just £2.45 per test. In France, people can pick up tests for as little as £1.