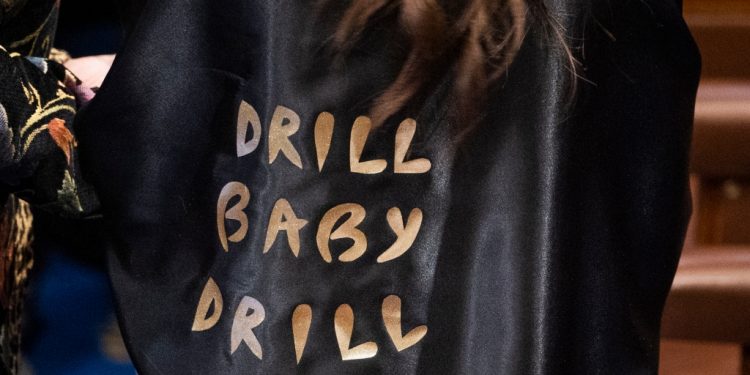 
President Joe Biden was heckled during his State of the Union speech by Republican Reps. Lauren Boebert of Colorado and Marjorie Taylor Greene of Georgia tonight.

NBC’s Garrett Haake told viewers that Boebert “and Marjorie Taylor Greene…kept up something of a running commentary throughout much of the speech, interjecting.”

Boebert, who wore a wrap with the words “drill baby drill” on the back, appeared to be the night’s interjector-in-chief.

Biden, as he did throughout the speech, sought to find common cause with Republicans as he spoke of caring for U.S. servicemen and women who may have been exposed to toxic substances while Afghanistan and Iraq.

“When they came home, many of the world’s fittest and best-trained warriors were never the same,” he said. “Headaches. Numbness. Dizziness.”

He added, “A cancer that would put them in a flag-draped coffin, I know.”

Those last two words were a transition to a personal story about his son Beau, who died of cancer after serving overseas.

It was apparently a reference to the 13 U.S. troops lost at the Kabul airport in August as the U.S. pulled out of Afghanistan.

Boebert was roundly booed, and Biden went on without acknowledging her comment.

“One of those soldiers was my son, Major Beau Biden,” he said. “We don’t know for sure if a burn pit was the cause of his brain cancer, or the diseases of so many of our troops. But I’m committed to finding out everything we can.”

Boebert did get a response from Rep. Eric Swalwell of California on Twitter. He wrote, “They don’t have ideas they have vitriol. We are better than this.”

As @potus spoke about his late son, Beau, @RepMTG repeatedly shouted over him. No one on her side will condemn her indecency. They don’t have ideas they have vitriol. We are better than this. #SOTU

As Biden spoke of immigration, MSNBC cut to Boebert and Taylor Greene in the crowd chanting “build the wall,” echoing a Donald Trump mantra.

And even before Biden’s speech, the duo may or may not have turned their backs as the president’s cabinet was introduced, even as nearby lawmakers stood and applauded.