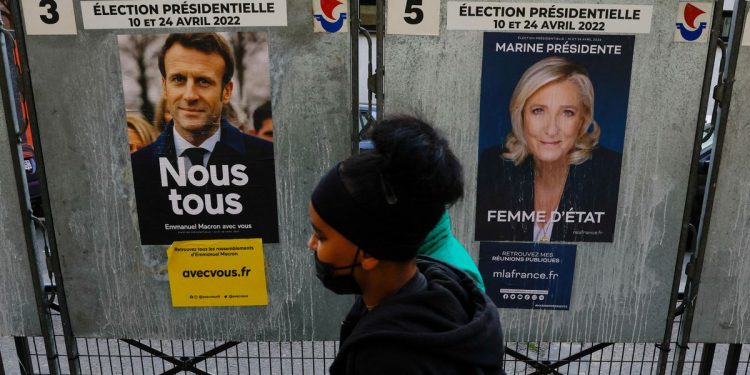 PARIS, April 10 (Reuters) – Voters cast ballots across France on Sunday in the first round of a presidential election where far-right candidate Marine Le Pen is posing an unexpected threat to President Emmanuel Macron’s re-election hopes.

Voting booths close at 8 p.m. (1800 GMT), when the first, and usually reliable, exit polls will be published. Polls published before a campaign blackout suggested the most likely outcome was an April 24 Macron-Le Pen runoff.

Until just weeks ago, opinion polls pointed to an easy win for the pro-European Union, centrist Macron, who was boosted by his active diplomacy over Ukraine, a strong economic recovery and the weakness of a fragmented opposition.

“I think he’s the only one today who has the courage … to build the France of tomorrow,” Armelle Savidan, a 47-year-old human resources manager, said after casting her ballot for Macron in Paris.

But Macron’s late entry into the campaign, with only one major rally that even supporters found underwhelming, and his focus on an unpopular plan to increase the retirement age, have dented his ratings, along with steep inflation.

In contrast, the anti-immigration, eurosceptic Le Pen, 53, has been boosted by a months-long focus on cost of living issues and falling support for her far-right rival, Eric Zemmour.

“We’ve long been known for our views on immigration, but what we’re putting forward now is the social problems in this country,” said Steeve Briois, a mayor for Le Pen’s National Rally party in the northern French town of Henin-Beaumont.

Rising fuel and food prices, fanned by the war in Ukraine, are a pressing issue for many voters.

In the central village of La Villetelle, Delphine Boyer, a 39-year-old childcare assistant who voted for centre-right candidate Valerie Pecresse, said purchasing power was a worry, along with a sense that “no one looks after us in the countryside”.

Last polls still had Macron leading the first round and winning a runoff. But they also showed Le Pen narrowing the gap and some put her within the margin of error.

Macron, 44 and in office since 2017, spent the last days of campaigning trying to make the point that Le Pen’s programme has not changed despite efforts to soften her image and that of her National Rally party.

In Sevres, just outside Paris, 58-year old aeronautical engineer Jacques Poggio said that while he backed Macron five years ago, he now voted for the hard-left Jean-Luc Melenchon, because he was disappointed with Macron’s “very right-wing signals”.

Melenchon has been running third in polls and his campaign has urged left-wing voters of all stripes to help him into the runoff.

Macron was elected in 2017 on a neither-left-nor-right centrist platform but his economic and security policies veered to the right.

Assuming that Macron and Le Pen go through, the president faces a problem: many left-wing voters have told pollsters that, unlike in 2017, they would not cast a ballot for Macron in the runoff purely to keep Le Pen out of power.

In Bobigny near Paris, Alex Talcone, a 52-year-old maintenance technician, said he voted Melenchon on Sunday and would choose Le Pen in a second round against Macron because “we need to try something else”.

An updated estimate of turnout at 5pm will give a further indication of voter mobilisation before the 8pm election close.

Adelaide Crows triumph over adversity in AFLW, but a complete reset is needed after the league’s most-difficult season yet