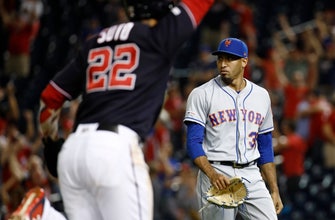 A look at what’s happening around the majors Wednesday:

The Mets and Nationals are set for a matinee in Washington after playing a wild one Tuesday night. The Mets scored five runs in the top of the ninth to lead 10-4 before the Nats rallied all the way back in the bottom of the inning, capping the rally with a three-run, game-ending homer from Kurt Suzuki. The Nationals/Expos franchise had never won a game after trailing by at least six runs in the ninth or later.

“That’s hard to do even in a Little League game,” said dejected Mets outfielder Brandon Nimmo.

Astros center fielder George Springer was being examined for a head injury after running into the wall and being carted off the field at Milwaukee. The 2017 World Series MVP was walking around the clubhouse after a 4-2 loss and manager AJ Hinch said Springer was day to day and OK to travel back to Houston with the team.

Springer was hurt making a catch on a ball hit by Ryan Braun. Springer fell to the ground and grabbed the back of his head after losing his glove.

Astros personnel attended to him, and after a lengthy delay, Springer sat upright in the cart driven by Miller Park emergency attendants.

After a day off, the AL West-leading Astros host Seattle.

Rays infielder Eric Sogard had his helmet and glasses knocked off by Baltimore reliever Paul Fry’s pitch Tuesday night. Sogard was able off walk off the field after a brief examination by trainers and said the ball struck his shoulder first, then his helmet and nose.

“It busted my nose a little bit,” Sogard said. “I feel like that was a best-case scenario. The way it turned out, I feel very, very lucky.”

Scott Heineman hit his first career homer on Tuesday night, and the Texas outfielder got a little help in retrieving the souvenir at Yankee Stadium.

As Heineman rounded the bases in the ninth inning, a ball was thrown back onto the field — a ballboy scooped it up and tossed it to a fan. Yankees PA announcer Paul Olden told the crowd that it was Heineman’s first career homer and he’d like to have the ball.

Turned out the ball that was thrown back was not actually the souvenir ball. But Heineman eventually got the right ball back by making an exchange with a fan from New Jersey.

“Obviously it’s something you dream of,” Heineman said. “For it to happen here, it’s just funny the way the world works, because both my parents are from New York. So, I’ve got family here, my dad’s side of the family is all in the stands, and it was pretty cool.”

Heineman’s older brother, Tyler, recently got called up by Miami and is ready to make his major league debut. Their parents were in Pittsburgh to watch Tyler with the Marlins while his sisters, and an aunt and a few cousins attended the game in the Bronx.