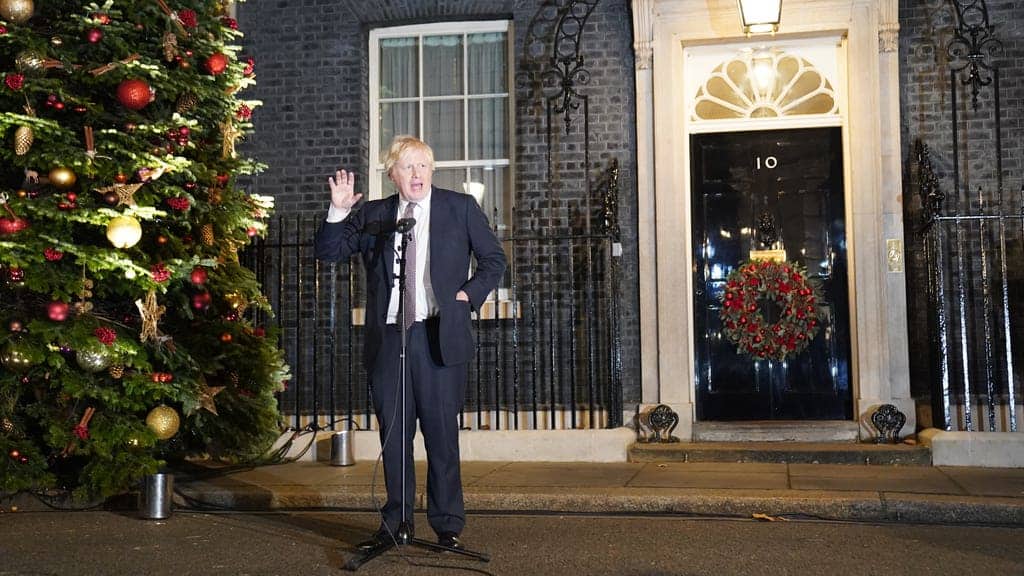 The Sunday Mirror has published a picture of the prime minister reportedly playing quiz master while flanked by colleagues, one of whom is draped in tinsel, in the No 10 library while London was in Tier 2 restrictions.

Downing Street has confirmed that the Conservative Party leader had “briefly” taken part “virtually” in the quiz.

Tier 2 restrictions stated that there could be no mixing of households indoors, apart from support bubbles, and a maximum of six people outside.

The quiz is said to have taken place on December 15 – only three days before an alleged rule-breaking Christmas party in No 10, which is currently being investigated by the Cabinet Secretary, Simon Case.

Official guidance at the time of the quiz set out that there should not be work lunches or parties “where that is a primarily social activity” and was not exempted for “work purposes”.

“He must have known”

Asked on the BBC’s The Andrew Marr Show whether the Prime Minister had been breaking the law at the time the picture was taken, Labour leader Sir Keir Starmer said: “Well, it looks as though he was.

“He must have known that other groups were in other rooms in his own building.”

The Sunday Mirror quoted a source who claimed many staff were huddled by computers in their Downing Street offices, conferring on questions and drinking alcohol while the quiz was taking place.

It reported Mr Johnson surprised staff by turning up on screen as quiz master for one round lasting between 10 and 15 minutes.

Opposition leader Sir Keir stopped short of calling for Mr Johnson to resign over his participation in the event.

He, instead, called him the “worst possible leader at the worst possible time”, arguing that trust in new measures to control the fast-spreading Omicron variant could have been undermined by recent rule-breaking allegations.

Cabinet minister Nadhim Zahawi said Labour had adopted the “wrong” stance on the quiz as he defended the Prime Minister against suggestions of having flouted the regulations.

The Education Secretary told Sky News’ Trevor Phillips On Sunday programme: “What do we see in that picture?

“We see a Prime Minister on a virtual quiz night for 10 to 15 minutes to thank his staff, who by the way, had no choice but to come in every single day.

“Sitting in his office are the two people who are closest working with him, no alcohol on the table, not drinking, on a Zoom call or a Teams call, a virtual call respecting the lockdown rules.

“Many people would have had similar Zoom quiz nights around the country.”

He added that there was not “a rule against recognising Christmas with tinsel or a hat”, as the staff pictured on either side of Mr Johnson appeared to be doing.

Mr Zahawi said there had been “hype” around Government party claims, with two alleged Downing Street events currently being probed, but that the picture would allow the public to “make their mind up” for themselves.

A No 10 spokeswoman said: “This was a virtual quiz.

“Downing Street staff were often required to be in the office to work on the pandemic response so those who were in the office for work may have attended virtually from their desks.

“The Prime Minister briefly took part virtually in a quiz to thank staff for their hard work throughout the year.”