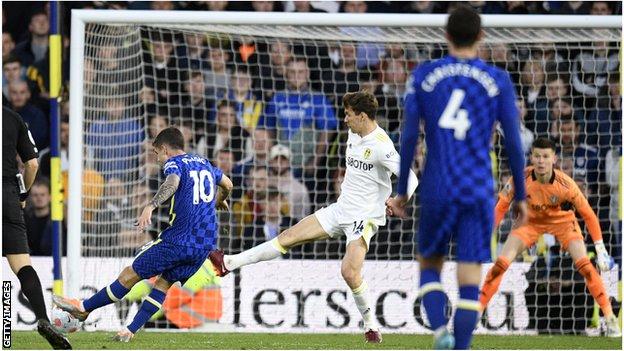 
Leeds United boss Jesse Marsch had a feeling of “deja vu” after his side conceded early and had a player sent off in the 3-0 defeat by Chelsea which keeps them in the relegation zone with two games to go.

Christian Pulisic and Romelu Lukaku added to Chelsea’s lead as they close in on sealing a Champions League spot.

On Sunday, Leeds conceded twice in the first 10 minutes against Arsenal and had Luke Ayling sent off in a 2-1 defeat.

“I’m gutted. We give up an early goal and go down a man again – deja vu,” Marsch told BBC Sport.

“We don’t get a chance to stay in the game and see if we can test ourselves and come away with more. We lose another player.

“Two tackles in the last two games that were a little bit crossing the line and hurting the team. I’m not going to blame or finger point any of our players. They’ve given everything they can. We have to stay within boundaries in not jeopardising ourselves.”

Leeds also became the first team to ever receive 100 yellow or red cards in a Premier League season.

Mount scored the game’s opening goal with a lovely first-time effort from outside the box from Reece James’ cut-back at the end of a nice passing move.

Kovacic had to be replaced because of an ankle injury following the foul by James. “It looks swollen and painful. It’s the same ankle he had injured already. It doesn’t look good,” said Blues boss Thomas Tuchel.

Pulisic slotted Mount’s pass into the bottom corner from 20 yards.

Lukaku – who earlier had a goal disallowed – scored the third goal that the Blues’ dominance deserved as he took his time to hold off three defenders and smash home.

Leeds offered very little and their hopes of staying up are out of their hands. They are behind 17th-placed Burnley on goal difference and two points off Everton, and have played a game more than both.

Chelsea only need to beat one of Leicester or Watford – or hope Tottenham do not win all three remaining games – to clinch a place in next season’s Champions League. But for now their focus turns to Saturday’s FA Cup final against Liverpool.

Is the end nigh for Leeds?

Leeds replacing their legendary boss Marcelo Bielsa with Marsch in February has brought no real upturn in fortunes.

Ill-discipline cost them again with James shown a fully-deserved red card for a bad foul on Kovacic – who was booed by home fans as he limped off to be replaced by Ruben Loftus-Cheek. That was their third red of the season (on top of a record 97 yellows) and their second in four days.

Leeds now need to get something from games with Brighton and Brentford – without Ayling or James – and hope Burnley or Everton slip up above them.

Leeds have conceded 37 goals in their home league games this season, their second worst ever record in a top-flight campaign.

They could perhaps deal with those struggles better if they were scoring more goals – but they only had five shots at Elland Road, none on target.

Chelsea, who have been comfortable in third place for most of the season, looked to be cruising towards the Champions League places but a run of three games without a win might have seen a tiny bit of doubt creep in.

They could be guaranteed a top-four place by the time they go to Wembley on Saturday if Spurs do not beat Arsenal on Thursday.

Thomas Tuchel’s side were deserved winners and could have scored more, with Lukaku having six shots alone.

The Belgian continued his revival with his third goal in two Premier League games. He had only netted four in his first 22.

In Mount – involved in the first two goals – Chelsea have a star. With 11 goals and 10 assists he is only the fifth (and youngest) Chelsea player to reach double figures in both in a Premier League season, after Frank Lampard, Didier Drogba, Juan Mata and Eden Hazard.

“We were very focused,” said Tuchel. “Even against 11 players we were clearly the better team. I felt the team were very committed, focused and calm. I had a good feeling.

“I was happy with how we played and how the players reacted after Saturday’s late equaliser [in the 2-2 draw with Wolves]. We trusted ourselves but it was necessary to clear the air and refocus.”