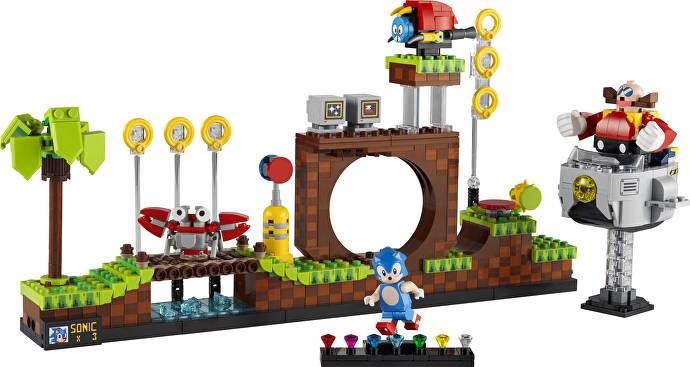 
It’s been a few months now since another video game icon made his kinda-sorta Lego debut with the release of Lego set 21331 – Sonic the Hedgehog’s Green Hill Zone. Sonic might only have one set where Mario has many, but it’s a hell of a set.

Sonic actually made his true Lego debut in a video game – appearing in Lego Dimensions via a small expansion pack that unlocked a little in-game Sonic tribute. But now he’s made the jump to Lego proper with a real set courtesy of Lego Ideas, the website where fans can submit potential set designs for review by the bigwigs at Lego, the same service that has given hope of (and then swiftly killed) sets based on Zelda, Among Us, and Metroid. Lego ended up loving the Sonic set idea, took it to Sega, and it got a full release.

After a limited release as an exclusive at the official Lego Store, the Sonic set is now available in a wider release at, as the TV ads of my youth used to say, ‘all good toy stores’. You can now buy it everywhere, basically. Just in time for the release of the Sonic 2 movie.

Lego Sonic and Lego Mario are curiously similar, sitting at opposite ends of the same spectrum of Lego creativity. It’s all in the design of the sets themselves, which are both geared towards creativity but in very different ways.

I guess I’d call Lego Mario ‘guided creativity’, the sort of thing that Lego does a lot to help kids get into its sets. Lego Mario provides a framework of modular pieces that can be used to build elaborate levels, and you can then use the electronic Mario figure and a paired smart phone app to save the level layouts, record high scores, and so on. It’s encouraging kids to be creative, but with parts and level elements that slot together in a deliberately easy manner. Building those sets takes all of five minutes; it’s what you do after the sets are built that makes Lego Mario special.

Lego Sonic is more about open, unguided creativity. You get the main set, which is based on Green Hill Zone, and if you want the fun can end there. It’s a fun build with Sonic, a couple of Badniks, Robotnik, and a lot of iconic level elements. You get a little stand for Sonic, and at the end of each stage of the build you add one of seven Chaos Emeralds to the stand. It’s clever, cute, and ideal for Sonic fans who don’t know their Lego.

But if you know your Lego? Oh, boy, this set is clever. What it does is quite similar to what Lego’s Modular Buildings did in the ‘Creator Expert’ line of sets, which have since been rebranded as ‘Lego for Adults’ – they provide a framework from which you can build much more.

You see, the Green Hill Zone set is actually made from a number of smaller modules that slot together to create a level layout. Like Mario, this means you can re-order them to create your ideal layout – but it also means you can get even more creative still. The set even features conspicuous attachment points at each end, clearly placed by the Lego designers to signal to builders that this set is considered a starting point, not the end of Lego Sonic’s adventures.

This creativity was shown off in part by Lego fan Viv, aka toastergrrl – the fan who designed the original Lego Sonic pitch that then eventually became the final set. Viv released alternative instructions so those with two copies of the set could build alternative pieces of Green Hill Zone design, then slot them into their overall build. This was cool, and set the tone. Other fans have run with it.

If you hop onto a Lego MOC (that’s My Own Creation, by the way) database, you can find a burgeoning community of fans crafting alternative or even all-new Lego Sonic builds. There’s Lego takes on different iconic Badniks like the Buzz Bomber or Burrowbot (known better to real ones as Grounder), and best of all there’s whole new zones.

I was so taken aback by builds of the Chemical Plant Zone and Star Light Zone, I had to order the parts in order to build them to sit next to my Green Hill Zone. I think Spring Yard Zone is next, but I’m also weighing up Aquatic Ruin Zone.

This sort of creativity is Lego at its best, for my money, and I’m thrilled to see it manifest so thoroughly in a video game set. It also sets the mind racing, naturally, at what else the official Lego designers could come up with given the time. Hopefully Lego Sonic has more official adventures to come – but even if not, that one set has kicked off some brilliant fan designs.

Arnaut Danjuma: ‘It’s fair and factual to say I’m among the best wingers in the world’ | Villarreal