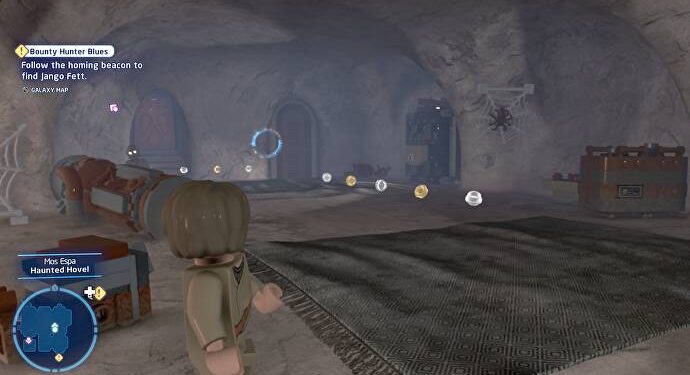 
If you’ve been able to spend any time with LEGO Star Wars: The Skywalker Saga, the picking and choosing of what lore to include and omit feels a little odd sometimes. However, this is of no detriment to the overall experience. It can just seem a little weird when you notice it, and fans have been noticing one particularly peculiar inclusion in Episode 1.

First and foremost, even though Episode 1 of Star Wars is now decades old, the game is still packed with secrets and other neat tidbits. If you don’t want those spoiling for you, go play Episode 1 and return here when you encounter a creepy-looking droid.

As Episode 1 of The Skywalker Saga comes to a close, and Anakin celebrates his podracing victory, you’ll return to the area of Mos Espa and catch a glimpse of Nobot. He’ll run into the house in the Slave Quarters that is beside Anakin’s house, wielding a Kyber Brick; follow him, and you’ll see what I mean when I refer to him as a ‘dark droid’.

The room Nobot is residing in is eerie in itself, and with his head tilted at an angle, it almost feels like you stepped out of LEGO Star Wars and into a LEGO Westworld. Nobot will shortly disappear, leaving scraps all over the place, and probably filling you with a slight sense of dread.

If you go into the room where Nobot seemingly vanished and break the blocks here, there’s a key to the door behind. This room can then be accessed by braking C-3PO apart, and you’ll see the illusive bot running away once more. Head a little further, and you’ll find the his body – decapitated – holding a Kyber Brick.

Now, there’s nothing to fear. Nobot is, in fact, part of a Legends short story. Nobot isn’t even his real name, but the alias assigned to the ghostly, nameless protocol droid of Episode 1: The Phantom Menace. His story itself is rather dark, so it makes him a very unusual addition to The Skywalker Saga, but there’s no denying that this encounter wasn’t interesting.

Nobot, and his story, was also featured in the StarWars.com Databank, but the page is now unavailable; you can, however, check it out using WaybackMachine. Nobot’s story is twisted and tragic, which makes it an even more unusual inclusion in what is arguably a game aimed at children. But hey, I was playing Resident Evil before I could string a sentence together, so I’m not judging.

Nobot’s past is told by Jira, one of the market’s vendors. He is known as a mysterious robot nomad or ghost droid, with some coining him Nobot. He apparently wanders across Tattooine aimlessly, stopped by nothing and noone, always landing himself in Mos Espa again.

Jira says that Nobot first appeared decades ago. At the time, he appeared covered in blood, scorched, and his serial number was illegible. Supposedly, the ghost droid was the only surviving witness of a horrific murder involving a pregnant woman. I told you Nobot was dark, but he gets even darker.

Nobot doesn’t communicate like over 3PO’s, and instead, his communications module plays the victim’s plead for help and screams of terror before turning into static noise. As if that isn’t awful enough, some believe that Nobot may have been the murderer… and the rumours don’t stop there.

Some believe that the dark droid may have actually been possessed by evil spirits from the Dark Side, and many tried and failed to destroy Nobot. No matter what, he always returns to Mos Espa.

While the story very much belongs to Jira, many characters have gone about trying to retell it – so, who knows what’s true about Nobot and what isn’t? We’ll never know, but it’s fascinating to see LEGO Star Wars: The Skywalker Saga laced with lore from the franchise that often goes forgotten.

Have you met Nobot yet?