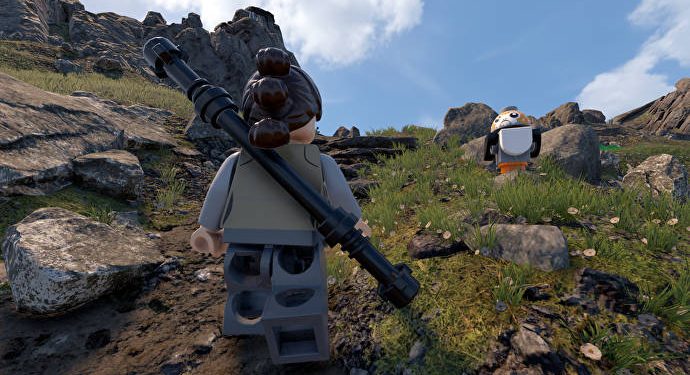 
The Lego Star Wars formula is old. The first game to take the plastic Lego aesthetic into Tatooine and beyond launched way back in 2005, wrangling the dramatic events of Episodes 1, 2 and 3 into a goofy, undemanding pantomime. It was fun for everyone; simple enough for kids to mash away at without thinking, and referential enough for adults to grin smugly at when they got references – both obvious and oblique – as they worked through the story.

But, some 17 years later, something has to give: not only have there been four more Lego Star Wars games since this brilliant debut, there have also been all manner of other licensed titles beating the same ‘Age 4-99’ drum. DC, Marvel, Indiana Jones, Lord of the Rings, and Disney/Pixar properties have all had this ‘don’t-think-about-it-too-hard’ Lego mentality applied to them over the years. And though the appeal of Lego in the real world might never get old, doing the same thing over and over again in games sure does.

So it’s a bloody good job Lego Star Wars: The Skywalker Saga has made this timeless aesthetic feel so damn fresh.

First up, this is TT Games’ biggest game to date. There have been some pretty huge Lego games in the past, but this one takes the modular, build-it-yourself cake. In a hands-on demo, I got to feel around the intro to Episode 4 (all 9 mainline Star Wars episodes are present, with nods and bytes of spin-offs like Rogue One poking their heads in here and there for fun). Two levels and a little bit of the Tatooine hub world took me the better part of two hours to clear… and I rushed through that for the sake of wrapping my eyes around as much of the game as I could. It’s huge. Massive. Galactic.

Each level – as well as all the collectibles and secrets you’d expect from these game – has three unique level challenges you can complete; a first for LEGO. On top of that, there are three tiers of rewards for collecting everything in a level, and sniffing out every last block and secret will net you Kyber bricks – a resource that will let you unlock more abilities per class (Hero, Jedi, Scoundrel, Scavenger, Bounty Hunter, Villais, Dark Side, Astromech and Protocol Droid) which can, in turn, let you new levels and secrets. Similarly to Super Mario Odyssey and its power moons, experimenting with fun stuff in a cheeky way might unlock more Kyber bricks for you.

It’s ‘collect-em-all’ catnip, and to punctuate all that sniffing around you need to do to find everything worth finding, TT Games brings its penchant for puns, alliteration and wordplay into the fold, too. Granted, those of us that remember the ‘silent comedy’ era of Lego games will mourn the goofy (albeit very specific) humour that came with it, but the scripting, impressionism and sly digs at iconic Star Wars moments here are just as worthy of praise as anything the studio has done before.

But what’s the point in poking every wall, breaking every item and replaying levels to take advantage of the new branching paths you can take if it’s all dull as dishwater? Offsetting some of the repetition of later Lego games, TT has packed Lego Star Wars: The Skywalker Saga with new mechanics and moment-to-moment improvements: the combat has a combo meter, making it feel more like a ‘my-first-Arkham’ system and requiring more thought to break through enemy armour; you can now get behind cover and aim down sights when it comes to gunplay; and the abilities have each been re-thought to feel more authentic to the Jedi/Dark Side fantasy when you’re playing as either side. Yeeting fuel tanks at Tusken Raiders as Obi-Wan and hearing them squeal as they break apart into pieces is – I’m sad to say – sadistically brilliant.

Between breaths, puzzles are still as integral as you’d expect in a LEGO game – and, yeah, these can still feel quite slow. But hey, this is a kids’ game first and foremost. At least there are multiple solutions to puzzles this time around – whether it’s hacking, destroying items or lite-platforming sections, there are usually multiple paths through (and they’re not too obscure). And, if the nostalgia wears off and you do start to roll your eyes at the structure of the levels, you’ll be able to shift over to open space battles, smuggling runs, dogfights, and more. There’s so much to do in this game, it’s nearly overwhelming.

And there are “well over 300 characters”, too. So if you get tired of working through Luke, Obi-Wan or Rey’s stories, you can tab over to the character screen and choose to play as Jabba, Salacious Crumb or even Babu Frick (if you so wanted). Bored in a level? Switch to a Rancor and run amok scaring civilians in a city – it’s not going on a rampage in GTA, but it’s a nice change of pace, and watching all the NPCs scatter and scramble is never not funny.

Towards the end of a presentation before the hands-on demo, TT Games showed me a ‘galaxy rave’, where the developer turned Hoth’s Echo Base into a giant glitter ball and played a Berlin techno version of the Imperial March – which made all the creatures and characters in the game dance. This is just one of the many various secrets you can unlock, apparently. Wild.

TT Games claims this game represents “a massive achievement for the studio”, and you can see why. From the lush little Lego dioramas that depict each episode in the menu to the ludicrous scale of the game as a whole, after actually getting my hands on what TT Games has been cooking up since at least 2019, I understand why this game has taken so long to manifest like a Force ghost in front of us all.

This isn’t just another title churned out to honour some license agreement and perpetually take up space on game store shelves, no – this is a proper, honest-to-God video game that’s been painstakingly pieced together like all those Lego Star Wars sets you love. Lego Star Wars: The Skywalker Saga is a love letter to Star Wars, Lego, and family-friendly gaming. Yes, it’s a shame it’s not the silent goofy comedy pantomime it used to be, but it’s brimming with charm and inventiveness and the joy of play that perfectly captures the spirit of Lego.

Frankly, it’s a dream come true for Star Wars fans and kids (of all ages).

Lego Star Wars: The Skywalker Saga is in development for PC, PS4, PS5, Xbox One, Xbox Series X/S, and Switch and will launch on April 5.

UConn wins an ‘ugly’ one to reach yet another Sweet 16