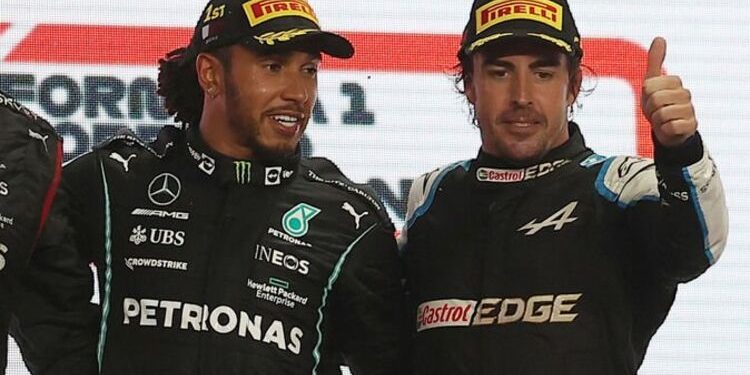 
Lewis Hamilton’s tussle with Fernando Alonso at the 2021 Hungarian Grand Prix has been used as an example of why F1’s new rules might not improve the sport this year. Ahead of the new season, a whole host of regulations have been imposed in an attempt to make F1 better.

During last year’s race in Mogyorod, Hamilton found himself directly behind Alonso in the latter stages of the race.

And the Briton, who was fifth at the time, tried desperately to overtake the Spaniard and force his way into the podium positions.

Alonso held him off for what seemed like an age, despite the fact the seven-times champion had the faster car.

Hamilton eventually got past his rival after spending 10 laps behind him and finished third, before being promoted to second in the aftermath of the race when Sebastian Vettel was disqualified.

The battle between Hamilton and Alonso was an epic one and provided plenty of entertainment for the F1 fans watching on.

JUST IN: Michael Masi sack debate rumbles on as Ricciardo and Norris weigh in at McLaren launch

“Whereas, maybe this year, you might get past in two laps – so you won’t see that side of it, you don’t see as good of a battle.”

F1 estimated that cars lost over a third of their downforce when they came within three car lengths of the car in front of them last year.

And they lost almost half of their downforce when they came within one car length of the car in front.

And Norris admits that wasn’t ideal either.

“On the other hand, there were not many battles because as soon as you get two seconds behind someone, you lose downforce and you can’t do anything,” the 22-year-old added. “It could go either way.”

F1 teams began launching their new cars earlier this month and there will be more unveilings throughout February.

And fans could be treated to another enthralling season when the first Grand Prix of 2022 gets underway in Bahrain in March.