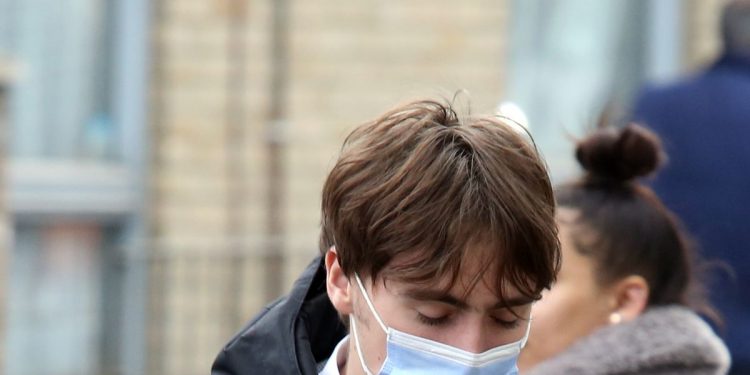 
The son of Oasis legend Liam Gallagher and The Beatles drummer Ringo Starr have been labelled “entitled young men” by a judge, after a drunken fracas in a Tesco Express, which saw them throw groceries on the floor and attacked by a worker.

Gene Appleton Gallagher and Sonny Starkey arrived at Wood Green Crown Court on Wednesday, where they heard no evidence would be presented for the charges against them (

Liam Gallagher’s son and Ringo Starr’s grandson threw groceries on the floor in a drunken late night Tesco brawl before being attacked by an employee, a court heard.

In a case of rock and roll gone Gene Appleton Gallagher, 20, and Sonny Starkey, 21 descended on the Tesco Express after deciding they wanted more booze before throwing shopping on the floor and Starkey was grabbed by staff, in a Wood Green Crown Court heard.

The scuffle was sparked after staff tried to stop their friend, former model Noah Ponte, 21 leaving the shop with a £1.70 can of gin and tonic.

The pair were ordered to stay out of trouble by a judge after charges of affray were dropped when it emerged they acted in self defence after a witness came forward.

The witness, who lived in London at the time, described how a member of staff at the Hampstead store had hit and grabbed Mr Starkey, describing the employee as “the aggressor”.

The judge branded the pair “entitled young men thinking they can get what they want from misbehaving” after hearing details of the late night brawl.

Alexander Agbamu, prosecuting, said Starkey had been placed in a headlock “for some minutes”, by a store employee back in May 17, 2019.

Starkey, Gallagher and pal Noah Ponte, 21, were due to stand trial this week after denying affray during the incident, which happened after 11pm.

However, Mr Agbamu said the crown would be providing no evidence for these cases.

Today, Ponte was found not guilty by a jury of the theft of a can of gin and tonic, which preceded the fracas, the prosecution had said.

At the beginning of Wednesday’s hearing, which could not be reported until Ponte’s theft trial concluded today, Mr Agbamu explained that there were “three phases” to the incident, the first being a confrontation between the trio and two members of Tesco staff following Ponte’s alleged theft.

“Phase 2 involved kicks and punches delivered” by Gallagher and Starkey directed to one of staff members, he said, while phase three saw Starkey put in a headlock and kept like that for “some minutes”, by one of the employees.

Mr Agbamu explained that two days ago the prosecution were presented with “enhanced” CCTV by Starkey’s legal team, which showed a “lost part of phase 1”- the confrontation at the start.

“In that footage one can see a member of staff advancing towards Mr Starkey, Mr Starkey falling out of view and apparently to the ground,” he said.

They were also presented with a statement from a witness who previously could not be tracked down because she had moved to another country.

During the confrontation at the beginning, she described “young men throwing groceries around” and a member of Tesco’s staff “hitting and grabbing Mr Starkey and appearing to target him.” She added that the staff member was the “aggressor”.

The prosecutor also read out a statement from a security guard at the store, who was there at the time.

The guard said the group “started the problems, however I believe that the staff should have been more patient with the males, they were clearly young and drunk and they could have left me deal with the situation.

“My role is to deal with security issues within the store, they didn’t allow me to handle the situation. They came in and the situation went from a discussion with me to a fight with all of the staff.

“In my opinion both sides could have handled the situation better,” he finished.

Addressing Starkey and Gallagher, Judge Joanne Greenburg said: “Your behaviour on this occasion when you entered the Tesco store was in my view completely out of order, no doubt as a result of having been drinking.”

She said people running late night stores deal with enough “without entitled young men thinking they can get what they want from misbehaving and that’s what you did.”

She agreed to a request to bind the pair over, and ordered them to “keep the peace and be of good behaviour for a period of 12 months,” with a recognizance of £500 each.

Who Should Be Allowed to Donate Blood?

Who Should Be Allowed to Donate Blood?