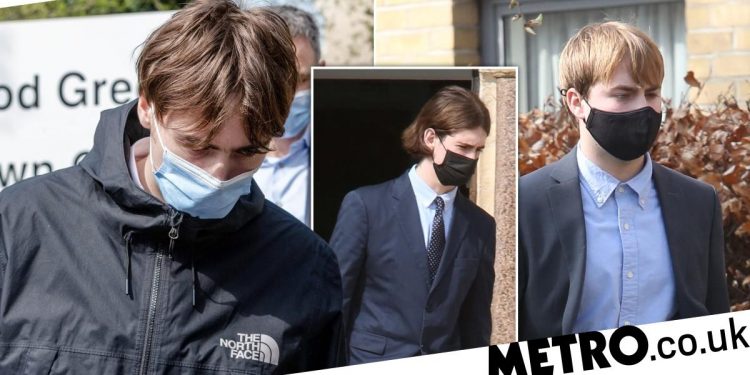 
Liam Gallagher’s son and Ringo Starr’s grandson are set to stand trial this week alongside another friend on charges of assault and affray after an alleged late-night altercation at a Tesco store.

Gene Gallagher, 20, son of Oasis star Liam, as well as Beatles’ drummer Ringo’s grandson Sonny Starkey, 21, and model Noah Ponte, 21, are accused of fighting in a Tesco Express store in Hampstead, North London in May 2019.

The trio are charged with affray and assault by beating, while Gallagher and Ponte are also accused of racially aggravated assault, with Ponte having a further charge of theft. All three deny the charges against them.

Prosector Alexander Agbamu told a hearing at Wood Green Crown Court: ‘The original plan was that we would be starting a trial today.

‘We were informed on Friday that in fact because the court has been overrun with cases, we can start this trial on Wednesday.’

An earlier hearing was told that the alleged altercation occurred after Ponte is claimed to have stolen a can of beer as it was after 11pm and the shop had stopped selling alcohol.

Starkey and Gallagher are alleged to have ‘windmilled’ down the aisle at a shop worker trying to stop them from leaving.

A fourth friend, who has not yet been named, was not charged as he acted as a ‘moderating influence’.

Gallagher, Starkey and Ponte all appeared at the short pre-trial hearing in suits, and did not speak during their time in the dock.

At a hearing in March 2020, Agbamu told Wood Green Crown Court: ‘This is a very factually straightforward case where much of the incident has been captured by CCTV.

‘Nothing that hasn’t been captured on cameras can be given in evidence by witnesses.’


MORE : Amanda Holden, Caroline Flack and Liam Gallagher among stars in powerful eyes closed portraits for mental health awareness: ‘In some ways, you can see more clearly with your eyes shut’

The Legend Of Zelda: Breath Of The Wild 2 Delayed To Spring 2023 – Nintendo Life