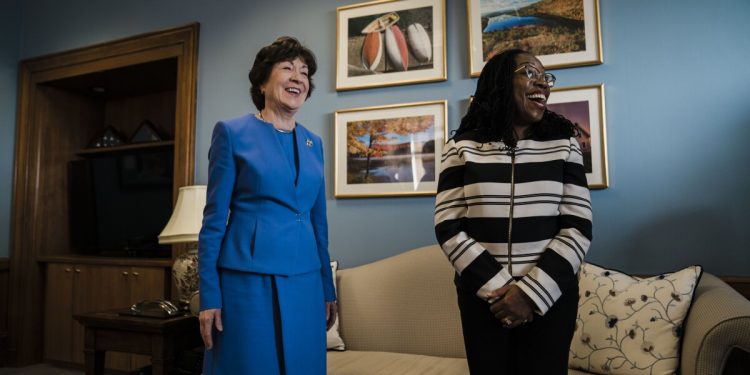 When Judge Ketanji Brown Jackson becomes Justice Jackson — a promotion now all but certain — she’ll be the first appointee of a Democratic president to join the Supreme Court in nearly 12 years.

Three Republican appointees have joined the high court in the meantime, cementing a solid 6-3 conservative majority built through tactics that many Democrats see as theft.

The Republican blockade of Judge Merrick Garland in 2016 held open the vacancy that President Trump filled in 2017 with Justice Neil M. Gorsuch. In 2020, the mad rush to confirm Amy Coney Barrett after the death of Justice Ruth Bader Ginsburg gave conservatives the seat they needed to dominate the court, potentially for years.

The success of those GOP moves has left many activists on the left viewing the high court with dread.

They point to several lines of evidence, including comments by conservative justices suggesting they want to dramatically reduce the power of federal regulatory agencies; remarks by Republican lawmakers saying the court should give states free rein not just to ban abortion, but to restrict other long-established rights, such as access to contraception; and a string of cases that have undermined key parts of the federal Voting Rights Act.

Most Democratic voters, however, don’t share that view — not yet, anyway. That’s one big reason why the campaign on the left to increase the size of the court, which would allow President Biden to appoint additional justices, has gone nowhere. Democrats pay more attention to the high court than they used to, but there’s still nothing to match the intense, decades-long focus Republicans have brought to bear in shifting the court to the right.

Jackson is on track for confirmation later this month because she shares the qualifications that have defined successful nominees for the last half-century and, just as importantly, because the public backs her.

A poll released Wednesday by Quinnipiac University, for example, found that by 51% to 30%, Americans said the Senate should confirm Jackson, with 19% expressing no opinion. By 52% to 27% the public disapproved of how Senate Republicans have handled the nomination; they approved of how Democratic senators have acted 42% to 34%.

That reflects a widespread belief among Americans that if a nominee to the high court is qualified and doesn’t have a major ethical problem, senators should not impose an ideological test.

About 6 in 10 Americans say senators would not be justified if they rejected a nominee because of how that person would vote on major issues like abortion, affirmative action or gun control, according to the Marquette University Law School Poll, which has surveyed American attitudes toward the Supreme Court for several years.

Republicans and Democrats are each more likely to express that view when their own party controls the White House, but over the years, a majority of Americans has opposed ideological litmus tests for the high court.

The public, by and large, also doesn’t view the court as a starkly ideological body.

“There are an awful lot of people who are only casually engaged by the court,” said Charles Franklin, the director of the Marquette poll. But in “a rough and ready way,” the public does have a fairly clear view of what they think of the justices, he said.

But while many activists see the court as extremely conservative, the public — including many Democrats — mostly doesn’t.

Approval of the court has declined in recent years and is notably lower among liberals than conservatives, the Marquette survey found. At the same time, the partisan and ideological divide about the court is not nearly as sharp as the split over other government institutions or major issues.

Nearly two-thirds of Republicans and Republican-leaning independents, for example, say they approve of the court’s handling of its job; so do about half of Democrats.

Compare that with the huge partisan divide over the presidency: In numerous polls, well over 80% of Democrats, but only about 10% of Republicans, say they approve of Biden’s work, a gap that mirrors the one that existed during Trump’s presidency.

A couple of key factors go into shaping those views.

The public doesn’t pay a huge lot of attention to most Supreme Court decisions. A lot of what the court does tends to be highly technical and often one or two steps removed from directly affecting people’s lives.

And for decades, the rulings that have stood out have mostly been liberal ones.

That’s continued even in recent years as the court has moved right. No recent decision has attracted more attention — or had as much impact on people’s lives — than the 5-4 ruling in 2015 that legalized same-sex marriage nationwide. Another case two years ago, holding that the main federal civil rights law protects LGBTQ Americans against employment discrimination, also got a lot of attention.

By contrast, some of the court’s big conservative rulings — eviscerating important parts of the Voting Rights Act, for example — have a limited amount of immediate, visible impact. Other decisions, such as the string of recent cases expanding the rights of religious groups and individuals have come incrementally and haven’t drawn the level of attention that the gay rights rulings received.

The polling reflects that. In the Marquette survey, 71% said that over the past 15 years, the court had expanded the rights of LGBT Americans, compared with 14% who said the court had reduced those rights.

Asked about other groups, however, the public was far less certain. Only 31%, for example, said the court had expanded the rights of religious people and organizations compared with 23% who said it had reduced those rights and 46% who said the court had not changed much either way.

“Gay rights stands out” in the public’s mind, Franklin noted. By contrast, on the religion cases, “the public doesn’t see it at all. Those cases don’t tend to be super high-profile.”

This year could change all that. In December, the justices heard arguments in a case challenging a highly restrictive abortion law from Mississippi. The justices’ comments during the argument signaled that when the ruling comes, likely in June, they will vote to greatly scale back abortion rights.

By more than 2-1, Americans say they would oppose a ruling that overturned Roe vs. Wade, the court’s 1973 abortion decision. Now, that’s on the verge of happening, and the impact could be enormous, both for individual women and for the court.

Fallout from the nomination hearings

Thirty years ago, the patronizing and bullying behavior of senators toward Anita Hill, witnessed live on national television, prompted not just anger and revulsion but a political backlash that helped lead to the election of several women as U.S. senators. Don’t expect a similar impact from this year’s questioning of Judge Jackson, Mark Barabak wrote. That’s partly because of accidents of timing, but also because of shifts in news coverage, political culture and the nation’s capacity for outrage.

San Francisco voters will decide on June 7 whether to recall Dist. Atty. Chesa Boudin. Their verdict will reverberate far beyond the city’s 47 square miles, including in Los Angeles, where Dist. Atty. George Gascón faces a potential recall, Miriam Pawel wrote in her profile of Boudin. Because if you can’t make radical change in San Francisco, what future does the progressive prosecutor movement have?

The latest from Washington

With rare speed, the U.S. government has determined that Russian forces are committing war crimes as they attempt to bombard Ukraine into submission. But, as Tracy Wilkinson reported, even after egregious actions, war crimes prosecutions are methodical endeavors that can last for more than a decade before perpetrators are brought to justice — if they ever are.

Vice President Kamala Harris — whose father emigrated from Jamaica — met Wednesday with the island nation’s prime minister, Andrew Holness, at the White House, marking another historic moment for the first Black and South Asian vice president. As Noah Bierman reported, the meeting was the first time since 1995 that a Jamaican leader has visited the White House.

David Savage reported on the Supreme Court arguments over a California labor law that authorizes private attorneys to sue on behalf of thousands of workers, even if those workers had agreed to arbitrate their claims individually. The closely watched case is the latest and perhaps most important test of whether companies can shield themselves from costly employment lawsuits through arbitration clauses that forbid group or class claims.

The House moved Thursday to revive one of the more popular provisions of last year’s failed social safety net package, passing a narrow healthcare bill that would dramatically lower out-of-pocket costs for insulin users, Anumita Kaur reported. The bill passed by a vote of 232 to 193, with 12 House Republicans joining all Democrats in support.

The latest from California

California extended its eviction moratorium until June 30 in an emergency bill lawmakers approved Thursday, Hannah Wiley reported. The bill gives government officials another three months to disburse rent relief payments for tenants who have experienced financial hardship from the COVID-19 pandemic. Lt. Gov. Eleni Kounalakis signed the bill into law, becoming the first woman in California history to do so. She’s filling in for Gov. Gavin Newsom, who left the state Wednesday night on a family vacation.

Mayor Eric Garcetti’s nomination to be U.S. ambassador to India has touched off a battle in the U.S. Capitol, as more senators express concern about his handling of sexual harassment allegations and Garcetti and his aides step up their defense. As Dakota Smith and Jim Rainey reported, opposition to Garcetti began with Republicans, but now some Democrats, including Sen. Mark Kelly of Arizona, have started to publicly raise questions about whether Garcetti responded adequately to the allegations of misconduct by a top aide.

California’s Reparations Task Force voted Tuesday to define those who are potentially eligible for reparations as people descended either from African Americans enslaved in the U.S. or free Black people living in the country before the end of the 19th century. The task force is charged with developing a plan for what reparations might look like. As Taryn Luna reported, the question of how strictly to limit eligibility has been one of the most contentious early issues the panel has faced.

Sign up for our California Politics newsletter to get the best of The Times’ state politics reporting.