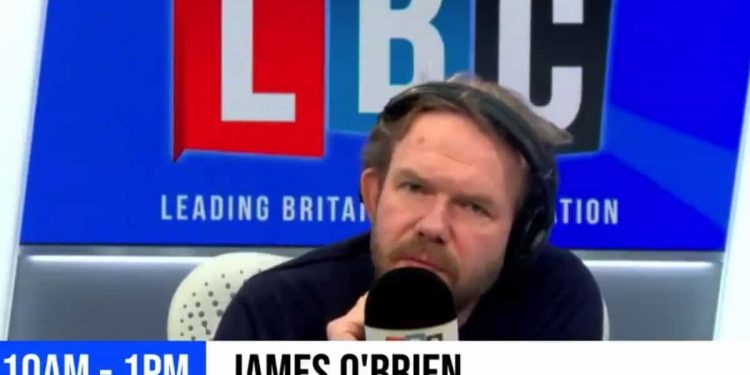 A lifelong Conservative Party voter had to fight back the tears on LBC following Boris Johnson’s conduct during lockdown.

Speaking to James O’Brien, the caller said he feels “physically sick” about what the prime minister is doing.

Today it emerged the police have been handed photos of Johnson drinking a beer at a lockdown-busting party in June 2020.

The prime minister is pictured standing next to Chancellor Rishi Sunak, who is holding a coke, in No10’s Cabinet Room.

Sources said Mr Johnson appeared to be raising his can of Estrella beer towards the camera in a toast.

The bombshell image was thought to have been taken by Mr Johnson’s official taxpayer-funded photographer who was documenting the event.

Needless to say, it is no surprise that the PM’s voters are upset with him.

Calling into the James O’Brien show on LBC, Seamus from Wallington explained that although his politics don’t align with that of the presenters, he had “crossed the ultimate line”.

“I feel physically sick,” he said. “I feel really, really hurt by what this man [Boris Johnson] is doing.”

“I’ve voted Conservative all my life – I’m 59. I believe, everything for me is about how you manage finances and the economy.

He continued: “I’ve never trusted Labour and I think the office of Prime Minister is a privilege. It’s the ultimate privilege.

“I don’t have any love for Keir Starmer at all. But I want to criticise the man and his policies and his political behaviours,” Seamus added.

“And to tell scurrilous lies in this way – you can’t have it and I feel really hurt. I can’t believe that we’ve got to this point in the Conservative Party.

“But I voted for him. I wanted to get Brexit done. I thought that he was the man to do it.

“I’d hold my hand up and say I’ve turned my eye away from a lot. But I don’t want to anymore.”

Seamus sounded tearful on the phone when expressing his views to which O’Brien replied: “You’re struggling, you’re suffering here and I understand why, you’ve been profoundly let down by somebody who you placed a lot of trust and a lot of faith in and you’re taking it very personally I think.”

O’Brien then asked Seamus how he can “possibly be surprised” at the prime minister’s actions, to which the caller said that he feels “stupid” after voting for Johnson.

“Well, don’t feel stupid,” O’Brien said in response. “I mean, you know what I say at this point – contempt for the conmen, compassion for the conned.

“But I am surprised at the scale of your surprise because you know he told you who he was a long time ago.”