Line of Duty: All the evidence that DC Chloe Bishop is a bent copper


Line of Duty fans are bracing themselves for Sunday’s finale, and there’s one member of AC-12 that they’ll be keeping a very close eye on indeed.

DC Chloe Bishop (Shalom Brune-Franklin) arrived on the scene at the beginning of series six and viewers have been voicing their suspicions on social media about her true intentions ever since.

At first, they believed she was a young and ambitious Detective Constable attempting to crack down on corruption in Jo Davidson’s (Kelly Macdonald) Murder Investigation Team.

However, their opinions are continuing to change as the series heads towards its conclusion.

After spotting what they believe to be new evidence in the penultimate episode, fans are more convinced than ever that she’s in cahoots with the Organised Crime Group (OCG).

Could Chloe really be a bent copper? Here are all the theories and evidence so far. 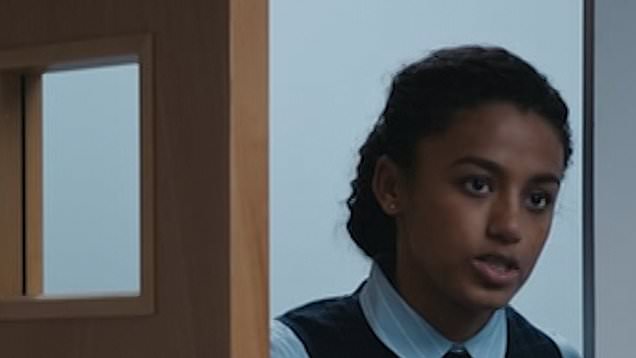 Chloe attracted the attention of fans during last Sunday’s episode, by giving Detective Chief Superintendent Patricia Carmichael (Anna Maxwell Martin) a lingering look which suggested they could be working together.

Nothing in Line of Duty is ever inconsequential, and the pair seemed to share a connection after Chloe was instructed to remove the picture of Chief Constable Philip Osborne (Owen Teale) from the Operation Lighthouse evidence board at AC-12.

After she shredded the portrait, she turned to Patricia and nodded, suggesting the pair had a deeper understanding.

The moment had social media users up in arms, convinced that the pair are in cahoots – we’ll have to wait until this Sunday to find out if they’re working together.

Chloe’s suspicious escape during the hijack

The hijacking of Jimmy Lakewell during episode four raised a lot of questions about Chloe.

FIrst off, Chloe seemed to be looking out for the OCG van before it first came into sight while they were in transit, causing Twitter users to accuse her of being in on the attack.

The key detail, though, could be something deceptively simple.

While all of the officers guarding the van were wearing black, Chloe was the only one wearing red – could it have been a way of identifying herself to the OCG gunmen?

The sniper that Steve Arnott (Martin Compston) eventually took out in a James Bond-esque moment also had a clear shot at Chloe, but she escaped unscathed.

We’re onto you, Chloe!

After Jimmy Lakewell was murdered in prison at the end of episode four, the team attempted to discover how the information reached the OCG.

Steve criticised the fact that the OCG must have had one of their members planted inside the prison. However, Chloe points out that the leak could have been coming from AC-12 itself.

There are two possible lines of thinking online – that the comment was intended to stop the team looking into OCG connections at the prison, or to deflect away from herself with a double-bluff.

Has Chloe been playing games since her first appearance?

The fact Chloe could be the daughter of DCI Tony Gates

Jed Mercurio’s show is constantly calling back to earlier series, and fans believe Chloe could have a connection to a character from way back in 2012.

Viewers think she is the daughter of DCI Tony Gates from series one. As viewers will remember, troubled copper Tony became involved with the organised crime group and eventually died after his affair with money laundering entrepreneur Jackie Laverty went awry.

He walked in front of a lorry so that his family would be supported after his death ‘in the line of duty’.

When the series finished, Tony’s daughter was just leaving school, which means there could be a family connection in the heart of AC-12 to one of its formative cases. A growing number of fans online are certainly convinced.

As her father died on AC-12’s watch, could she be working with the OCG to exact revenge on Ted Hastings and his team?

Line of Duty continues on Sunday at 9pm on BBC One.


MORE : Has Line of Duty become a victim of its own success? Mother have mercy and end it now


MORE : UK intelligence agency in on Line Of Duty chaos with bizarre search for H ahead of BBC finale