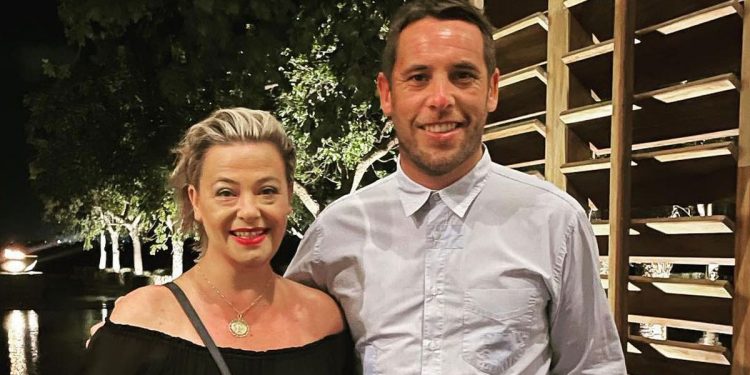 Lisa Armstrong looked gorgeous as she showed off her slim new look while on holiday with boyfriend James Green.

The make-up artist also revealed she and her electrician beau have got matching tattoos to cement their love, with both having the word ‘Amor’ – meaning love in Italian – on their hands.

The 45-year-old and James, 38, are currently enjoying a sun-soaked break after spending Christmas and New Year together, and the couple, who reportedly began dating in early 2020, looked besotted in Lisa’s latest snaps.

In the final picture, Lisa and James are posing together, and the Strictly Come Dancing make-up artist showed off her noticeably slimmer physique in a figure-hugging off-the-shoulder black dress.

Lisa and James looked happier than ever
(

The loved-up couple have matching tattoos
(

“You both look wonderful and happy,” one of her followers commented.

“So pleased you are truly happy again,” another agreed, as one added: “You deserve this so much.”

Her famous friends Lisa Snowden and Denise Van Outen also left love heart emojis on the post, as one of Lisa’s followers took aim at her ex-husband.

“Definitely thrown away a stone an (sic) found your diamond,” they wrote.

Lisa and James recently celebrated their second Christmas together, and she looked happier than ever after finding love again following her bitter divorce from Ant McPartlin.

Lisa looks healthy and happy with her new man
(

The couple are enjoying a break in an undisclosed tropical location
(

She and James are reported to have started dating following his separation from wife Kirsty, and they went public with their romance in August last year.

The former couple confirmed they had sadly split in 2018, after the TV star’s stint in rehab for alcohol and painkiller addiction.

Lisa and Ant finalised their divorce in April 2020, and share custody of their beloved dog Harley.

It’s reported the I’m A Celebrity… Get Me Out Of Here! presenter handed over more than £31 million to his ex-wife in the settlement, including their £5 million home in London.

They were together for 23 years before announcing their split in January 2018, following months of speculation.

Ant is now married to his former personal assistant Anne-Marie Corbett, and they tied the knot in August last year.

How Low Testosterone Affects Your ‘New Year, New Me’ Goals

How Low Testosterone Affects Your ‘New Year, New Me’ Goals