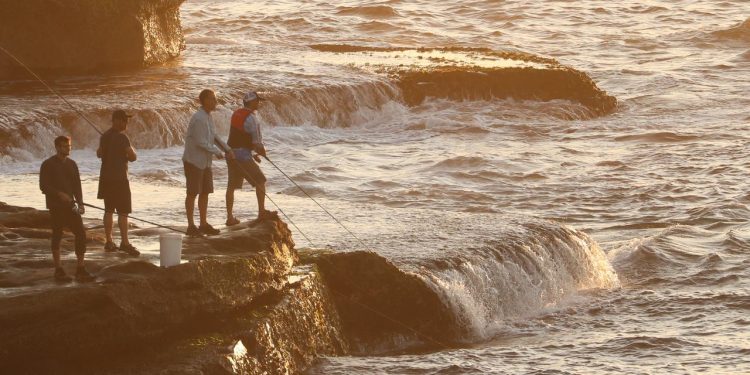 Sydney’s horrific fatal shark incident was an incredibly rare “full consumption” attack, a leading expert says. Here’s why we should be worried it still hasn’t been caught.

The killer shark that mauled a swimmer in front of horrified fishers at a popular Sydney beach was a “particularly nasty” predator, a leading expert says.

The city was rocked by its first fatal shark attack in almost 60 years on Wednesday after a swimmer was killed at Little Bay, metres from the rocks in front of horrified fishers and onlookers.

Terrifying video footage showed the moment the shark struck. “Someone just got eaten by a shark,” the man recording the video can be heard yelling, adding it was a “big great white”.

Huge splashes can be seen with the water in the area turning red and birds circling above. A torso can clearly be seen floating in the water in the graphic footage, before the shark returns and drags the victim under again.

Emergency services were called to the area near Buchan Point, Malabar, after receiving a report that a shark attacked a swimmer in the water just after 4.30pm on Wednesday.

Authorities then located human remains in the water at about 6pm and closed off Little Bay Beach, according to NSW Police.

﻿“Unfortunately this person had suffered catastrophic injuries and there wasn’t a lot paramedics could do when we arrived,” a NSW Ambulance spokeswoman said.

It is the first fatality from a shark attack in Sydney since 1963.

Sydney University academic and author of the book Human Perceptions and Attitudes Towards SharksDr Chris Pepin-Neff, told news.com.au that attacks of this magnitude were “incredibly rare” and the victim was targeted by a “particularly nasty shark”.

“There have probably been only 10 or 12 attacks of this kind in the last 30 years in the entire world,” said Dr Pepin-Neff, who has previously urged against the use of the term “shark attack”.

“I would compare it to something like the full consumption attack on the 17-year-old South Australian surfer Jevan White in 2001.”

Mr White was attacked by a shark as he returned to shore near Port Lincoln. He and his board were dragged out to sea with his remains never found.

Dr Pepin-Neff said that unlike Wednesday’s attack most interactions between sharks and humans were brief because we were inadequate prey, unlike a larger seal for instance.

“It’s not crazy for sharks to bite humans thinking we might be prey,” he said.

“They test out things all the time. But 80 per cent of incidents are hit-and-run. Sharks will recognise humans as a ‘biological failure’ as we take more energy than we give so we are not a prey item. It’s a bite and release.”

In fact most fatalities in Australia from sharks are due to blood loss from a single bite rather than an unsurvivable injuries from multiple bites.

“What’s exceptionally rare is for a shark to bite a human and then to bite them again,” he said.

“There’s no reason to bite a second time. In this case the shark was clearly able to diagnose that this was a biological failure, so it became something else. It was a repeated engagement that led to catastrophic outcomes. It became an attack.”

Dr Pepin-Neff said it wasn’t clear why this shark should act in this out-of-character manner, but all sharks were different and had different temperaments.

It was possible in this case hunger had led it to act more ferociously.

Dr Pepin-Neff recommended the deployment of SMART drum lines off the Sydney coast that enable sharks to be located, caught and relocated further out to sea.

Some on social media suggested the swimmer was in a dangerous location, just outside a cove where a shark would typically encounter a seal, and close to people fishing on the rocks.

But Dr Vanessa Pirotta, wildlife scientist from Macquarie University, said there were so many different variables in the marine environment that it was difficult to say what brought sharks to certain areas, particularly without “knowing 100 per cent what species” it was.

“Although in this case it does appear to be a great white,” she said.

She said witness accounts that the shark “came up and fell down like a car” and footage of the animal “thrashing about” were consistent with great white “ambush predator” behaviour, and that it appeared to have been an “opportunistic” attack.

“These animals are capable of huge geographical movement, something brought it close to shore,” she said.

“Currents, tides, water temperature, there are a whole variety of factors and unfortunately this is a tragic overlapping of two different species in a habitat. This is a tragic accident where human and shark have come together in the same environment.”

Dr Pirotta stressed that “sharks are not out to get humans” and that they play an “important ecological role”.

While authorities are now on the hunt for the shark, Dr Pirotta said it would be very difficult to find the animal responsible – or to answer the “number one question” of whether there may another attack.

“Shark attacks are incredibly unpredictable and very rare – you could almost say it’s a freak accident,” she said.

“Even in the marine world there wouldn’t be a scientist who is not taken aback by this. Really it’s very sobering. My condolences to the family and friends of this person. DPI will be working closely with authorities on a plan to minimise the risk to beachgoers. (One) option is to place SMART drum lines.”

Randwick Mayor Dylan Parker said the community was in shock. “To lose someone to a shark attack like this is chilling. We are all in shock,” he said. “Our entire community’s hearts go out to the family of the victim.”

Police will liaise with the Department of Primary Industries (DPI) to investigate the circumstances surrounding the death of the swimmer.

A report will be prepared for the Coroner.

Randwick Council announced on Wednesday night that Malabar, Maroubra, Coogee, Clovelly and La Perouse beaches would also be closed for 24 hours while council lifeguards looked for any further sightings of sharks.

Dr Pirotta said for now it was important for swimmers to swim between patrolled areas where there were “more eyes in the sky and on land”.

“Swim between the flags with a buddy and communicate where you are,” she said.

— with Chantelle Francis and Rhiannon Tuffield

How to Wash Running Shoes Properly

How to Wash Running Shoes Properly