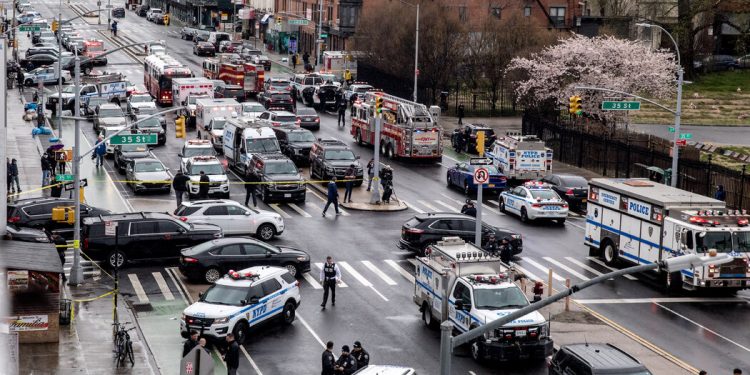 Five miles away from where a man opened fire in a subway train in Brooklyn and shot 10 people during the morning rush, the police recovered a rented U-Haul van late Tuesday afternoon that they believed had been driven by the gunman, a senior law enforcement official said.

But the van was empty, the official said, and the shooter remained at large, as agents from dozens of local, state and federal law enforcement agencies searched for him, more than eight hours after he donned a gas mask on a crowded N train, released a canister of smoke and began shooting.

At least 16 people were injured, 10 of them by gunfire, on the train and on the platform at the busy 36th Street station in the Sunset Park neighborhood, where three subway lines meet. The Fire Department said that five victims were in critical condition, but none were believed to have suffered life-threatening injuries.

The shooting, shortly before 8:30 a.m., set off panic and chaos aboard the train, in the station and the surrounding streets and sent schools in the vicinity into lockdowns that lasted much of the day. It came as the city was already struggling to cope with both a rise in shootings citywide and an increase in crime and disorder in the subway that has scared commuters from returning to a transit system that saw ridership plummet during the pandemic.

Mayor Eric Adams said that the search for the gunman was hampered by the fact that at least one security camera at the 36th Street subway station that might have captured the scene was not operating. There was a “malfunction with the camera system at that particular station,” Mr. Adams told WCBS 880 radio.

Witnesses to the shooting described the gunman as a short, dark-skinned man with a heavy build wearing a green construction vest and gray sweatshirt.

The van was spotted in front of an apartment building on West 3rd Street just off the Kings Highway shopping strip in the Gravesend neighborhood, the senior law enforcement official said.

The official also said that a gun had been found inside the subway station. The authorities have not released a suspect’s name, nor a motive for the attack. But another high-ranking police official said that the attack appeared to have been planned and showed no signs of having stemmed from something spontaneous like a dispute on the train.

As the shooting unfolded and the doors of the N train opened, sending smoke billowing through the station, fearful riders fled, many of them hurrying onto an R train sitting across the platform. Subway seats and cars were streaked with blood as people called for help.

John Butsikares, 15, a freshman at Brooklyn Technical High School, said his ride on a northbound R train from Bay Ridge had been calm — until the train approached 36th Street. When the doors opened, the conductor directed passengers on the platform to rush inside the R.

“I didn’t know what was happening,” he said. “There was just panic.”

Jose Echevarria, 50, an electrician headed to work in Manhattan, said he was about to switch from the R to the N when he saw smoke and gunshot flashes on the N and people running off it.

He said he grabbed one young man who had been shot in the leg and was bleeding profusely and helped him onto the R train. “He was so scared,” Mr. Echevarria said. The young man told Mr. Echevarria he had first seen the shooter at the New Utrecht Avenue station, four stops before 36th Street.

At a news briefing, Commissioner Sewell said that the police were seeking a man with a heavy build who had been wearing a green construction vest and gray sweatshirt. She said that no active explosive devices had been found at the scene or on trains.

Patrick Berry, 41, said he was waiting at the 25th Street station, one stop north, when an R train arrived at around 8:30 a.m. He and his 3-year-old daughter boarded, but the train didn’t move.

“Then suddenly, from the front of the train, I heard people screaming, ‘Run, run, run! Go, go, go!’ And then all these people came sprinting past our car, and I just felt like, ‘Oh my god, this is a stampede,’” Mr. Berry said. “People started pushing out from behind. So I grabbed my daughter, and we ran too.”

Toward the front of the train, three victims were being attended to by bystanders. A uniformed police officer approached, asking passengers to call 911 because his radio was not working. One teenager, who identified himself as Fitim, had a hole in his track pants that he said came from a bullet.

Around the 36th Street station, dozens of police vehicles with flashing lights clogged the streets and helicopters flew overhead.

“We saw an ambulance coming out with a stretcher with a person on it,” said Silvana Guerrero, 20, who works at nearby Sunset Bagels Cafe & Grill. “Their leg was injured — I’m not sure exactly what went on or what was going on. And then, we saw after that, two ambulances coming out, with two people, like, hopping on one leg.”

Fifteen people were treated at hospitals for injuries including gunshot wounds and smoke inhalation: eight at NYU Langone Hospital-Brooklyn, five at Maimonides Medical Center in Brooklyn, and three at NewYork-Presbyterian Brooklyn Methodist Hospital, the hospitals said. 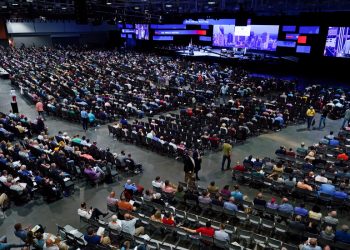