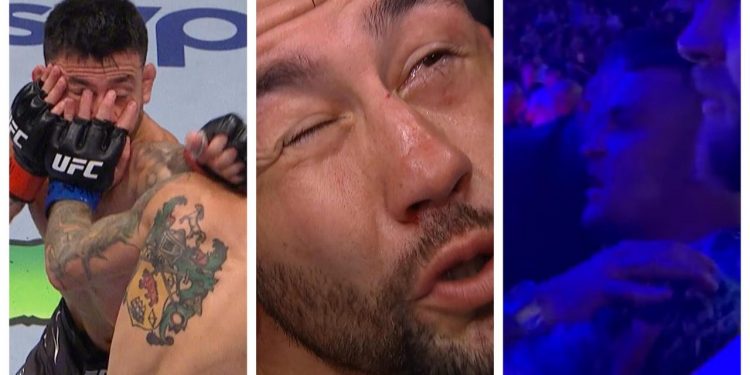 
The biggest day of the year is finally here, with two championship belts on the line at UFC 276 and they are only the headline fights in a stacked schedule.

In the main event, middleweight champion Israel Adesanya will look to make his fifth title defence when he takes on Jared Cannonier.

Earlier, Australian Alexander Volkanovski will look to defend his featherweight belt in his third meeting with fierce rival and crowd favourite Max Holloway.

START TIME: What time is Israel Adesanya vs Jared Cannonier?

There was controversy when Sean O’Malley and Pedro Munhoz’s fight ended a no contest.

This was O’Malley’s biggest test yet.

The No. 13 ranked contender had rapidly risen up the ranks of the bantamweight division to stake his claim for a title shot.

But there were doubters, critics who argued that O’Malley was yet to face a legitimate contender or truly prove that he had what it takes to be a genuine threat.

O’Malley was ready to make a statement against No. 10 ranked contender Munhoz.

Instead, he was forced to settle for a no decision after an accidental eye poke on Munhoz saw the fight stopped.

The crowd loudly booed, although Australian fighter Casey O’Neill tweeted in response: “I urge every fan who boos an eye poke to take an eye poke, then continue fighting another killer…”

There was plenty of action outside the octagon too, with Dustin Poirier and Michael Chandler involved in a tense exchange cageside.

UFC welterweight contender Gilbert Burns tweeted a video on Saturday night showing the pair involved in an argument, with Poirier overhead saying: “I’m going to f*** you up” while calling Chandler “a fake”.

It is unclear what sparked the altercation, although Chandler did tweet last year that he would “never quit” like Poirier did after he was submitted by Charles Oliveira.

Donald ‘Cowboy’ Cerrone had the magic number ‘50’ in mind before he decided to hang up the gloves.

The 39-year-old UFC legend it that number on Saturday.

While it did not end in victory, going down via submission to Jim Miller, Cerrone had the whole crowd at T-Mobile Arena on its feet when he went to place his cowboy hat and gloves on the floor of the octagon.

A classy Miller, knowing what was coming, had passed up the opportunity to speak immediately after his win, instead telling Rogan to pass the microphone to Cerrone.

“I don’t love it anymore Joe,” Cerrone said to Joe Rogan in his post-fight interview.

“Donald is a legend, he’s a guy I look up to, that I’m a fan of. We’re going to miss him,” Miller added, paying tribute to his opponent.

Miller was not the only UFC legend to call it a day though.

Earlier, No. 12 ranked women’s flyweight contender Jessica Eye announced her retirement from the UFC after a unanimous decision defeat at the hands of Maycee Barber.

It was a dominant victory for Barber, who is now on a three-fight win streak and has plenty to look forward to in her career.

For the veteran Eye though, it was clear post-fight that this was not a snap decision on her part but something she had put a lot of thought into as she placed her gloves on the floor.

By the end of three round it was red, covered in blood after the American sustained a brutal beating.

Tavares may have been on the wrong end of a unanimous decision result (29-28 x3) but he lost no admirers after lasting the distance against a relentless Du Plessis.

“You have the toughest mother f-er in the world right here in your town,” Du Plessis said post-fight.

You can read more about that fight here.

Gabe Green admitted earlier in the week that he did not even know who Ian Garry was when a fight with the undefeated rising star was first floated.

“His opponents weren’t super good, in my opinion, so it’s going to be interesting to see how he deals with me, who I think is a step up in competition compared to who he’s fought so far,” Green told reporters at the UFC’s media day.

Well, it is safe to say Green knows who Garry is now and as for how the 24-year-old handled the step up in the competition, the unanimous decision result (30-27 x 3) says it all.

Green definitely represented a step up in class for the Irishman and he rose to the occasion, calculated and patient with his approach in the opening round.

Garry only got better as the first round went on, putting up beautiful combinations late after finding his range earlier on.

Green came on strong in the second and had Garry buckled up at the fence later in the round but again, the Irishman was able to do enough to take the round.

It left Green needing something bigger and more impactful in the third to really turn the momentum.

Instead, it was Garry who dropped Green with an overhand right to open the round and once again assert his dominance.

Green continued to swing for the fences but could not find the decisive blow to turn the fight in his favour.

It took just under four minutes for Australian Jess-Rose Clark to have a two-fight win streak snapped the last time she was in the octagon.

This time, she tasted defeat after just 43 seconds, left with what appeared to be a dislocated elbow after a brutal statement from Julija Stoliarenko.

The armbar specialist had only landed one of nine takedown attempts in her career prior to Saturday’s fight but nailed one immediately against Clark to gain early momentum.

Stoliarenko then slapped on an armbar and Clark was in all worlds of trouble, tapping out shortly after.

“She dislocated it, you can see it,” UFC Hall of Fame inductee Daniel Cormier said in commentary.

“It’s dislocated bad. That was nasty. Jessica is tapping desperately.”

“The way she passed the guard, the way she got to that position. Watch this level change and look at the beautiful use of the hips and amazing flexibility in her core to get over there, passes that arm and gets that far-side armbar.”

The biggest day of the year is finally here, with two championship belts on the line at UFC 276 and they are only the headline fights in a stacked schedule.

In the main event, middleweight champion Israel Adesanya will look to make his fifth title defence when he takes on Jared Cannonier.

The American is a clear outsider for the fight, although he is not paying any attention to any of the outside noise as he aims to make the most of his first shot at the UFC title.

Rapper Drake added to that outside noise by announcing that he had put a $1 million bet on Adesanya to win.

FEATURE: Volk put everything on the line… it may finally end fierce UFC debate

ULTIMATE GUIDE: Everything you need to know ahead of UFC 276

“I don’t really think about what other people say, so don’t have any thoughts on what he said or what he’s saying,” Cannonier said earlier in the week.

As for Adesanya, he wants to go back to finishing with style and will be looking to do just that, predicting his performance will rival that of Anderson Silva against Forrest Griffin.

“They keep talking about power, ‘Power, power, power.’ You ever heard that before when someone fights me? Power this, power that,” Adesanya said.

“It’s the same old song. F***ing get it off repeat, get me a new song. I’m just glad I have new blood to fight in this fight.”

Another big fight on the card sees No. 4 contender Sean Strickland face Alex Pereira, with the result potentially deciding who takes on Adesanya next, should the Kiwi get past Cannonier.

The two have been exchanged in a war of words in recent days, with Holloway vowing to finish the fight within the first three rounds.

“But I feel good, I feel great. I feel on. I got to spend 10 rounds with this guy. I’ve been saying it all week, man. You guys will be blessed if we go above three (rounds). I can’t wait.”

Volkanovski did not have to take this fight but said it is the perfect opportunity to cement his “legacy” and put an end to the Holloway chapter after controversy surrounded his win in the second fight.

“This is definitely a legacy fight. That’s why we wanted this fight,” the Australian said.

“If I felt like this wouldn’t put me in a better position moving forward, you wouldn’t take it. But it does. You all want to see it, right? Everyone wants to see the trilogy. So that’s a legacy fight.

“People want to see it. I was open to it; I wanted it as well. So if that’s going to move me forward, let’s do it.”