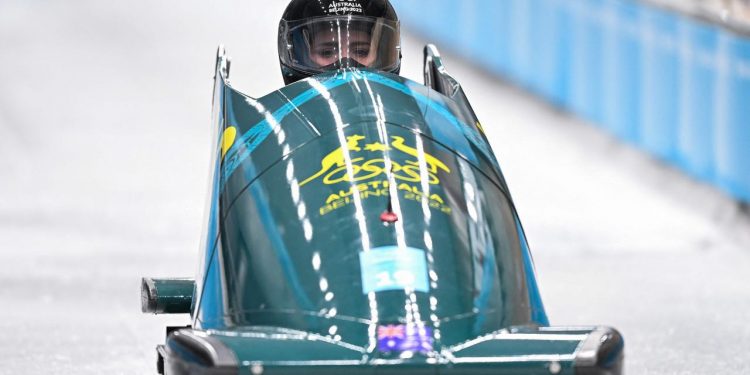 In Walker’s first run, she got off to a flying start and was on track to take the lead from American Kallie Humphries.

But a series of small mistakes proved costly, as she briefly bumped into the walls with her sled.

With those errors, Walker flipped from the green zone to the red as she gradually lost time on pace-setter Humphries.

She crossed the line for a time of 1:05:55 which left her in 10th spot after the opening heat.

In her second heat, Walker bettered her first run by just a milisecond to finish with a total time of 2:11:09 to take the provisional lead.

Though she was quickly surpassed, Walker’s time was the sixth-best in the second heat, and she now ranks seventh overall, less than 0.2 seconds from fifth and 0.77 seconds off a medal.

Heats 3 and 4 will take place tomorrow.

Walker dazzled in the training heats, coming 1st, 1st, 1st, 5th, 7th and 2nd to highlight her strong medal credentials for the event.

And with Australia’s best-ever medal tally for a Winter Games, currently sitting at one gold medal, two silvers and one bronze, Walker’s form in the training heats has the nation hopeful of adding another to the collection.

Aussie skier Louis Muhlen-Schulte clocked an overall time of 1:01:44 to jump into 27th place in the first run of the men’s giant slalom.

Only the top 30 get a second run, and Muhlen-Schulte faces an axious wait until the end of the session to see if he will get a crack at another go down the course with a medal on the line.

Should he get a second run, the event will begin around 4:45pm.

Day 9 schedule (Aussies in action, all times in AEDT)

Follow the day’s Winter Olympics action in our live blog below!

If you can’t see the blog, tap here.