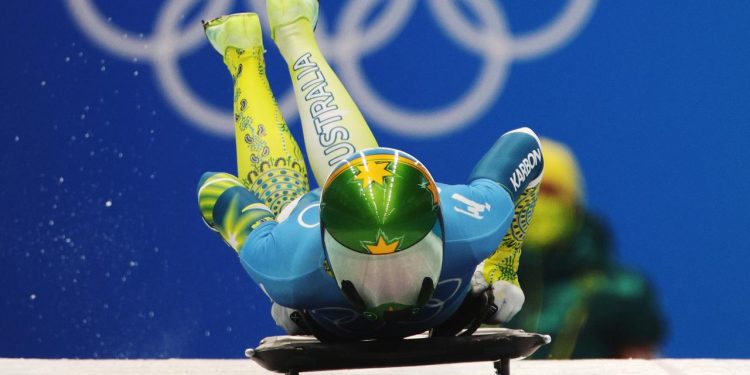 
Australia’s Jaclyn Narracott sat in the silver position heading into the final runs of the women’s skeleton, just 0.14 seconds away from a remarkable upset gold medal.

The 31-year-old from Brisbane and her closest rival, Germany’s Hannah Neise, set track records consecutively in the third heat to move ahead of the pack.

With 18 of the 20 riders completed in the final, Narracott sat at the top of the slide knowing she needed to record a 1:02.56 or better to secure a medal.

Follow the Winter Olympics in our live blog below!

Coming into the night first overall, Narracott went out first in the third heat and set a blistering 1:01.79 – a track record – to become the first woman into the 1:01s.

Neise then recorded a remarkable 1:04.44 to move 0.14 seconds ahead of Narracott.

But the ensuing contenders weren’t able to find as much pace, keeping Narracott safely ensconsed in second. She would need to lose 0.46 seconds on fourth-placed Kimberly Bos (or more to the women behind Bos) in the last heat to miss a medal.

All others 1.60 seconds or more behind leader

The total times from all four heats are combined to decide the overall standings.

Australia’s best ever finish in a sliding sport at the Winter Games is 10th.

If Narracott medals it will be the first time in Australian Winter Olympic history that the team has won four medals.

The 31-year-old from Brisbane led the event at the halfway stage, as with two of four runs completed, her time of 2:04.34 was the fastest overall.

Third and second across the opening two heats was a stunning result from the Australian, who finished 16th at PyeongChang 2018, placing her ahead of Germany’s top contenders – Hanna Neise and world champion Tina Hermann.

“This is what dreams are made of,” Narracott said.

“That’s how I want to slide and how I slide best.

“I had hoped to be in with the mix, but to be sitting on top is unreal.”

Below sections with Alex Conrad, AFP

It was early heartbreak for Australia to kick off Saturday’s action in the Winter Olympics.

Australia’s top duo of Belle Brockhoff and Cameron Bolton were joined by Josie Baff and Adam Lambert in the heats for the mixed snowboard cross team race.

Both Bolton and Lambert made strong starts in testing conditions as snow fell at Beijing, finishing first and third in their runs during the heats.

Then it was time for Brockhoff and Baff to take to the course but it ended in “disaster” for the two, with both crashing out.

“This is a disaster,” one commentator said on Channel 7.

“That is devastating in the Olympic debut for the mixed teams snowboard cross. The two Australian teams, in the same heat, both of them crash out.”

Attention immediately turned to the welfare of the two, with the course put on hold as medics attended to Brockhoff.

She had come into contract with Team USA competitor Lindsey Jacobellis’ board and fell.

Brockhoff was taken to hospital for imaging after complaining of a sore neck but “appears to be OK” according to an update from the Australian Olympic Team.

She was then cleared of injury after scans.

“Obviously result wise, there’s bigger fish to fry at the moment and hope that Belle is OK. Went down hard. Ski patrol around her. First of all hope she’s doing well. Saw her go down past and heard from the team she’s doing OK. Just precautionary.

“They think everyone is good. Hopefully that’s the case. So first and foremost. But then as a result for sure disappointing. Really were no limits today for us. We could have been super high up there and really in contention. It’s really disappointing.

“I don’t think the Olympics could have gone much worse for the Australian border cross team to be honest. Belle did well fighting for fourth. About everything else that could have gone wrong went wrong. I think the most disappointing thing is we came here and we didn’t show what we’ll capable of. We’ve had so much support from back home.”

Reigning mixed team world champion Jarryd Hughes was supposed to pair up with Brockhoff but was made unavailable after crashing out of the men’s event.

Hughes’ preparation for this year’s Olympics had been disrupted after he underwent surgery for an ankle injury.

Baff and Lambert got the late call-up for the mixed snowboard cross relay after the withdrawal of a team from the Czech Republic.

“It was such an awesome experience,” Baff told Channel 7 post-race.

“I was hoping to broke my first-heat voodoo today with Lamby and he gave me a nice position. I was cooking but I got unstuck but it was really fun.”

‘Bobsleigh Bree’ remains in medal calculations in the Women’s Monobob after a brilliant series of runs in the training heats.

Australia’s Breeana Walker finished second in the final heat before official competition begins on Sunday, with a 1:05.22 putting her just 0.27 seconds behind Germany’s Laura Nolte.

That wasn’t even Walker’s best time of the Games so far, after four runs into the 1:04s saw her win the first three heats across Thursday and Friday, with a best time of 1:04.40.

Walker is a legitimate contender for the podium, winning silver at the last two Monobob World Series events.

This is the Monobob’s Winter Olympics debut. It is a one-woman form of bobsleigh racing, allowing for some level of equality with the men’s sport. Men can compete in two-man and four-man bobsleigh, but women only have two-woman and now Monobob.

A former US Olympic snowboarder accused US Beijing Winter Olympic snowboard coach Peter Foley of sexual misconduct and other inappropriate behaviour in a series of Instagram posts on Friday.

Callan Chythlook-Sifsof said on her Instagram account that “Peter Foley has taken naked photos of female athletes for over a decade” and made a sexual remark to her and a teammate when she was only 17 at Lake Louise, Canada, in 2014.

“I cannot watch another Olympic Games without saying this publicly,” Chythlook-Sifsof wrote on Instagram.

In a statement to multiple media outlets, US Ski & Snowboard said the US national governing body for the sport is investigating the allegations.

“US Ski and Snowboard has been made aware of the recent allegations,” the statement said. “We take these allegations very seriously and the allegations are being investigated.” Chythlook-Sifsof also said Hagen Kearney, a US snowboardcross Olympian, had used a racial slur and harassed her.

“I will not carry this stuff around anymore,@ she posted. “There was bizarre behaviour across the board. The people I’ve named have overtly behaved toxically but the truth is the culture on the team protected this behaviour. Things have been normalised that are not okay.

“Other athletes have in engaged in racist, misogynist behaviour, actively participated in the strange dynamics that Peter Foley created and caused female athletes/staff to be victims of sexual violence.”

AUSSIES IN ACTION for Saturday February 12 (All times AEDT)

Follow the day’s Winter Olympics action in our live blog below!

If you can’t see the blog, tap here.