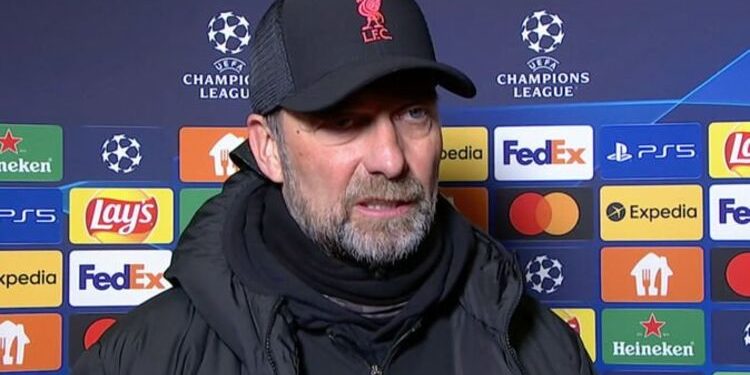 
Liverpool boss Jurgen Klopp felt his side could’ve and should’ve scored more goals to put their Champions League quarter-final tie well beyond Benfica – despite winning 3-1 away in Lisbon. The Reds cruised to a 2-0 lead at half-time but then invited the hosts back into the match after goalscorer Ibrahima Konate’s error allowed Darwin Nunez to score. Luis Diaz netted a late third to give the Premier League side a two-goal advantage to take back to Anfield and their lead effectively sees has them one foot into the semi-finals.

Despite Konate, Sadio Mane and Diaz’s goals at the Estadio da Luz, however, Klopp felt his charges might’ve scored four goals or more. Liverpool’s trio of strikes mean they continue to average at least three goals away from home in every European match they have played on their travels this term.

And they have now won their last eight away matches across all competitions, which is a new club record. Still, though, Klopp admitted it was not a perfect evening for his team despite a 16th win from their last 17 league and cup games. And he paid credit to Benfica goalkeeper Odysseas Vlachodimos for preventing his side from killing the tie.

Speaking to BT Sport, Klopp said post-match: “In the end we came here and won an away game in the Champions League which is tough. Benfica fought for their lives. We gave them a little bit, we opened the door a bit too much but they deserved the goal as well, even though we could’ve defended it a little bit better. They had counter-attacks. They have really good players.

MUST READ: Arsenal, Man Utd given reason to buy Nunez as he shows clinical side

“It was a tough game – what I expected. Especially when they scored, obviously the crowd was there immediately. We knew it, we always know it, 2-0 is nothing. It’s nice but not more. They scored the goal and it was much more open than we wanted obviously. But in the end, we should’ve scored in the first half, we could’ve scored again in the second.

“With the situations we have we usually score more. But we didn’t, mainly because of the goalie, credit to him. That’s pretty much the story. Scoring three, we could’ve scored in the last seconds maybe. A fourth would’ve been nice but we’re not in dreamland here. It’s half-time.

“It’s a better result than we had before [at 0-0] and we know much more about the opponent. They will go for it again, they won at Ajax and they ground out the results they needed in the group stage. We’re aware of their quality. Now we have a nice game in between! But we’ll be ready again for Benfica.”

Liverpool left-back Andy Robertson said to BT Sport: “It was a tough game. We were on top first half, created good chances and probably could’ve gone in a couple more up. We wanted to keep it tight and unfortunately we didn’t manage to do that. They managed to get a goal which lifted the crowd, lifted them and they started winning balls. We started getting sloppy but the third goal was big. There’s definitely still work to do.”

Goalscorer Mane added: “I am happy to score the goal but more happy that the team scored three goals and we are ready for the next game. It’s a great start [to a big week]. We can’t expect any better than that. Now we prepare for the next game.”

Liverpool now take on Premier League rivals Manchester City on Sunday at the Etihad in a huge game which could go a long way to deciding the destination of the league title. They face Benfica in the return leg of their quarter-final at Anfield next Wednesday.