Liverpool lead table above Man City, Newcastle into top half 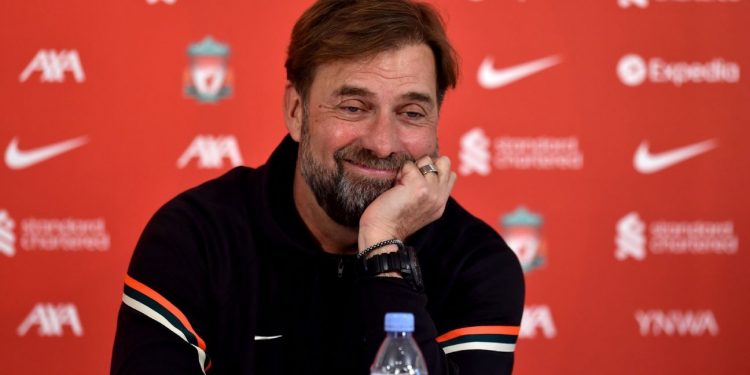 
The battle for the Premier League title this season is a tight one, with champions Manchester City just one point ahead of Liverpool.

But take away the decisions made by the VAR (video assistant referee) and the pendulum swings — with Jurgen Klopp’s men two points better off than their title rivals and up into top spot.

This season we’re looking at all VAR decisions across the Premier League, and seeing how they might have affected the outcome of games.

It’s not just about the number of times a team gets a favourable VAR call or about how many goals are affected. What’s more important is when these VAR decisions take place, how they might have changed the course of the game and, crucially, whether that impact would ultimately have changed the final score.

ESPN brings you the VAR Effect Table. We’ve taken all 94 VAR decisions in the Premier League so far this season and calculated how they might have changed the outcome of matches. We’ll continue to track VAR throughout the season and find out who the true winners and losers are.

How we work out the VAR Effect Table

We take only the first VAR overturn in each game, because the calculation considers that any subsequent VAR incident wouldn’t have happened because the whole direction of the game has been altered. (Think of it like a Marvel timeline, or the plot of any time travel movie.)

The VAR decision is then reversed to the original on-field call — so if a goal is disallowed for offside, it’s given as a goal.

If a penalty has been cancelled, it is considered to have been awarded and scored, unless the team in question has a penalty-conversion record below 50% over the season. For instance, so far this season Arsenal have missed three of their five penalties, with West Ham (2 out of 5) the only other club to have missed more than one. If below 50%, a penalty may be judged to have been missed.

If a team has been awarded a goal through a penalty or an incorrect offside through VAR, the goal is disallowed.

We then take into account a series of factors before settling on a predicted outcome:

Team form: Results in the previous six matches give an indication of how a team has been playing generally.

Time of incident: For instance, if an incident happens late in the game, it’s less likely that the scoreline would change again after this point.

xG at time of incident: This allows us to take into account which team has been creating the better chances and is in the ascendancy.

Team strength: As well as form, a team’s general strength plays a part. This takes into account league position, and a team’s goal-scoring and defensive records across the season.

Impact of incident: For example, a red-card decision being reversed may change the outcome of a match.

These results have then been used to modify the table and work out what impact VAR has had on teams’ positions this season.

The table shows each team’s position after the amended results, with the arrows indicating if their league position is better or worse without VAR. It’s worth noting that not all teams have played the same number of games at this time due to COVID-related postponements. 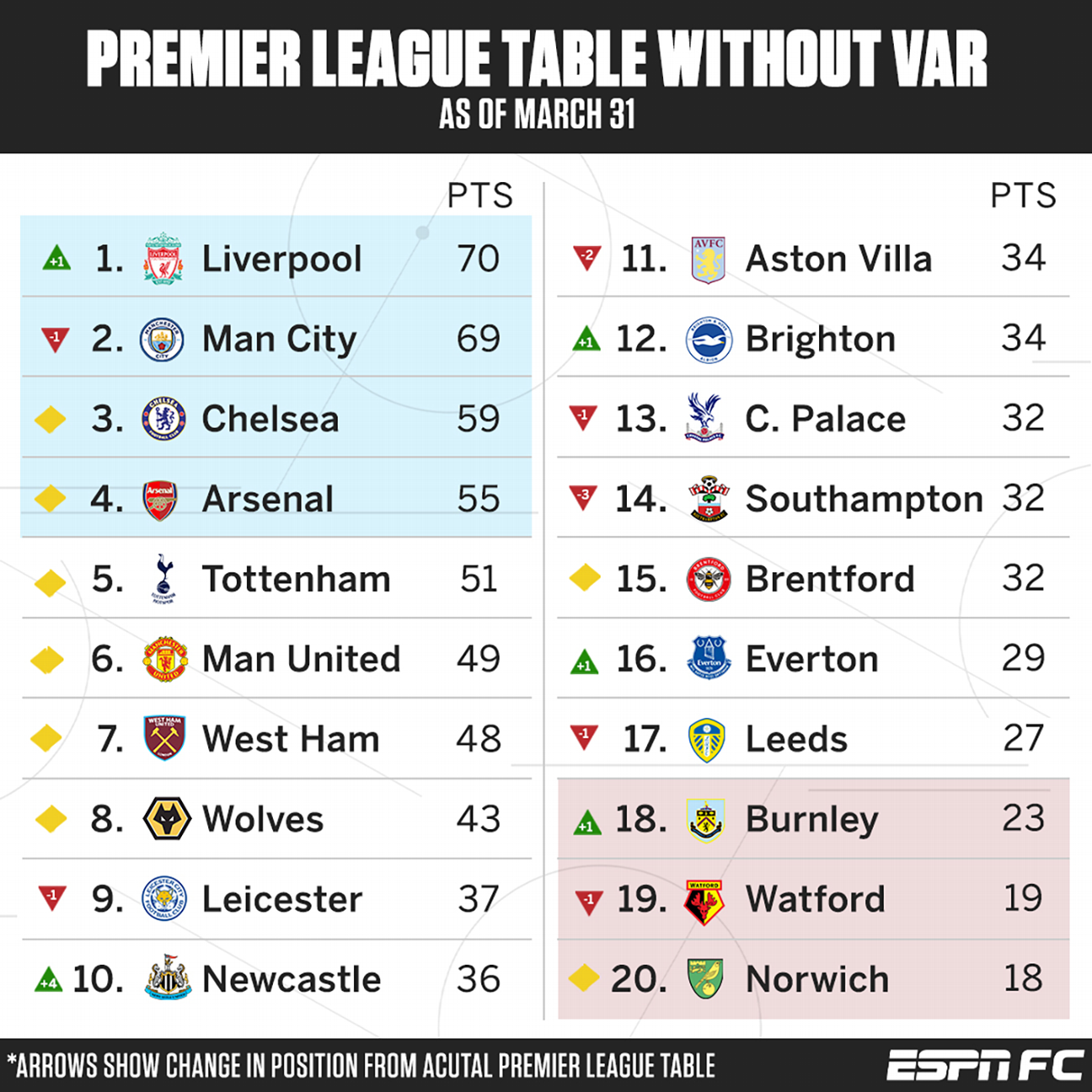 The big winners without VAR

Liverpool climb to the top of the Premier League table, though their gain is only one point (though there is a net gain of two on Man City), and only two results are affected by VAR decisions.

Jurgen Klopp’s men did lose a point at the start of the season, when the calculation said the Reds would have lost at home to Chelsea but for the VAR penalty and red card for Reece James for handball on the goal-line. They then gained two when their 2-2 home draw against Burnley is calculated as a 4-0 victory as Sadio Mane had a goal ruled out by the VAR for handball when the score was already 2-0 to Liverpool.

By comparison, Manchester City drop a point overall. The 0-0 draw at home to Southampton is now a 1-0 defeat after the VAR rescinded a penalty and red card against Kyle Walker. However, the loss at home to Crystal Palace is recalculated as a 2-1 win; City were trailing 1-0 when Gabriel Jesus had a goal disallowed for offside against Phil Foden with half an hour still to play.

The most high-profile VAR moment for City came in their away game at Arsenal in January. The Gunners were 1-0 up just after half-time when the VAR gave City a penalty, which Riyad Mahrez duly dispatched and Pep Guardiola’s team went on to secure a 2-1 victory. That City win is a defeat without VAR.

Newcastle United are by far the biggest winners without VAR, in terms of points gained and places climbed. Eddie Howe’s team, once one of the favourites for relegation, shoot up four places into the top half of the table after seeing their points total increase by five. Examples of VAR decisions to go against them include an injury-time VAR penalty to Southampton when the Magpies were 2-1 up, and a goal awarded to Harry Kane in a game which the Magpies lost 3-2 to Tottenham Hotspur.

Everton can also feel hard done by with VAR, as they climb away from the drop zone. With an extra four points, the gap to third-bottom doubles from three to six points. That said, they may have the VAR to thank for the red card shown to Allan vs. Newcastle which galvanised them to an injury-time 1-0 success.

Brentford and Burnley get two additional points without VAR, while Arsenal, Leicester, Brighton and Norwich benefit by just one point. 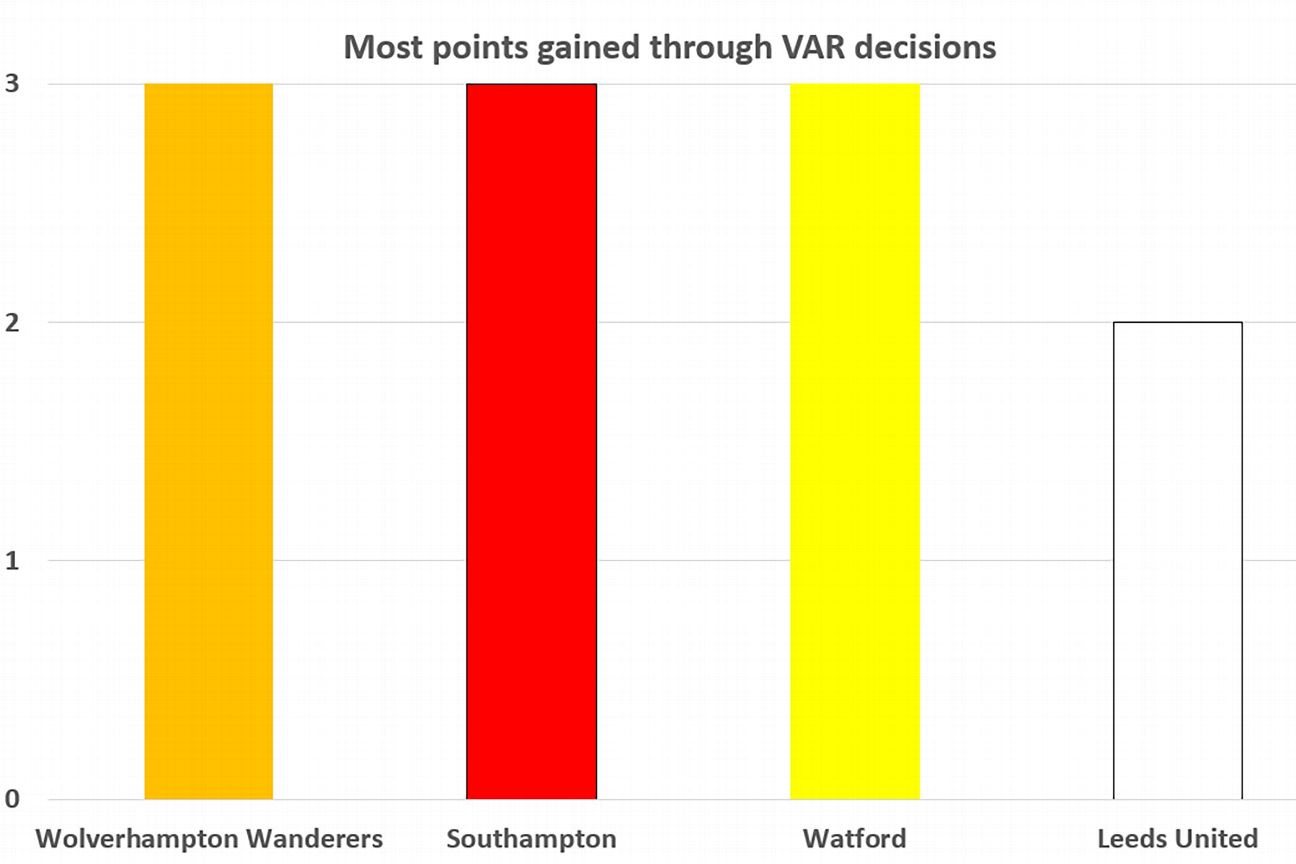 The big losers without VAR

Manchester United may only lose a point without VAR, but coupled with the point gained by Arsenal the Red Devils slip even further behind the race for Champions League football.

The gap to the Gunners grows to six points, with Arsenal having a game in hand as they look to return to the top tier of European football.

Man United lost one point after the VAR rescued them from a late defeat at home to Everton due to an offside, while Brighton received a VAR red card when 1-0 down in the 53rd minute at Old Trafford with a higher xG at the time — that win becomes a draw, meaning United had gained two points. One decision that did go against them was the disallowed goal at Burnley when the score was 1-1, and that cost them two points.

The biggest losers in terms of points are Watford, Wolverhampton Wanderers and Southamptonwho have all lost three points gained across the season thanks to VAR. Southampton are the worst affected in league position, dropping three places into 14th.

Watford were losing at Everton when Joshua King’s goal was allowed due to an incorrect offside flag. It proved crucial, as the Hornets went on to win the game 5-2. The table without VAR sees Watford’s hopes of staying up become slim, with an eight-point gap to fourth-bottom Leeds United when in the real table they are only three points from safety. 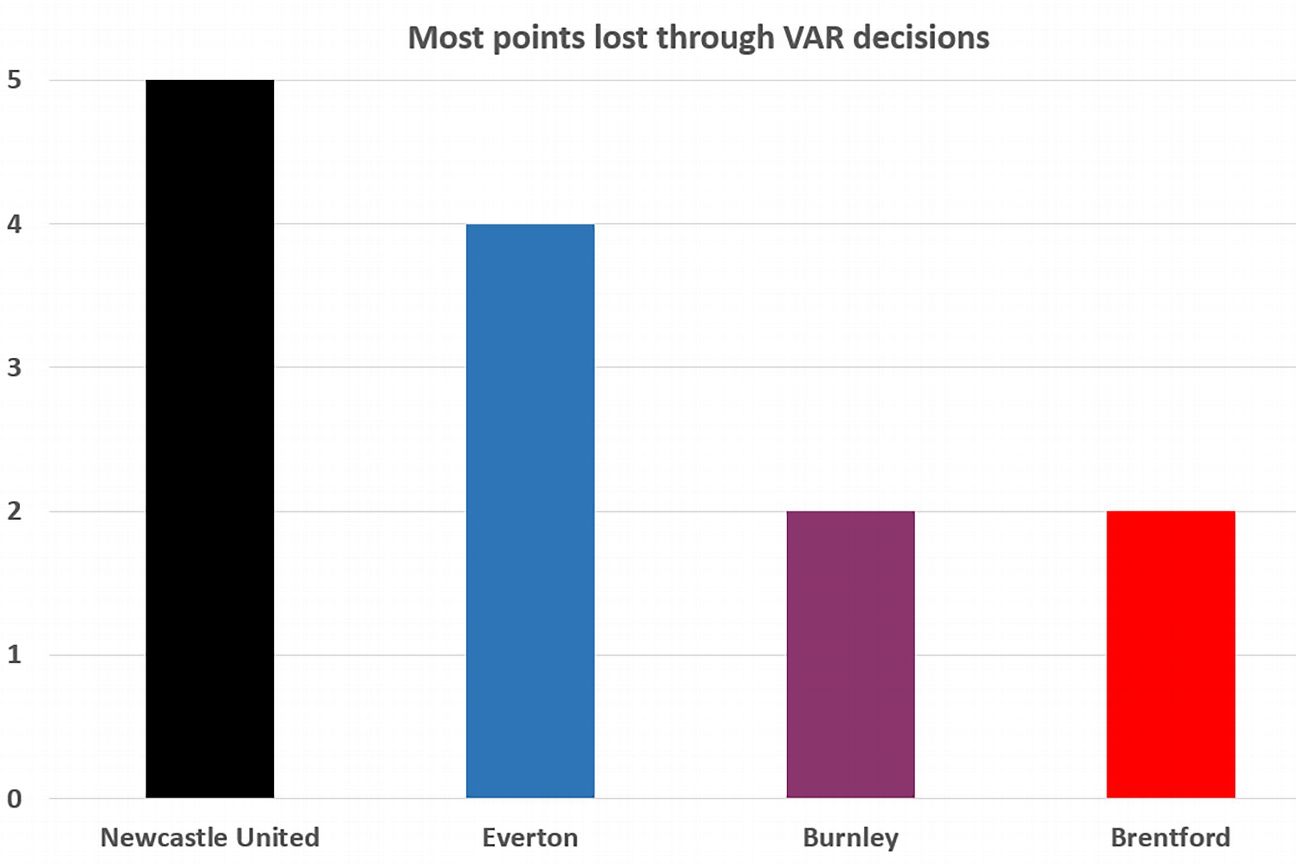 Aston Villa and Crystal Palace drop one point, while Chelsea, Tottenham and West Ham see their records unchanged by VAR.