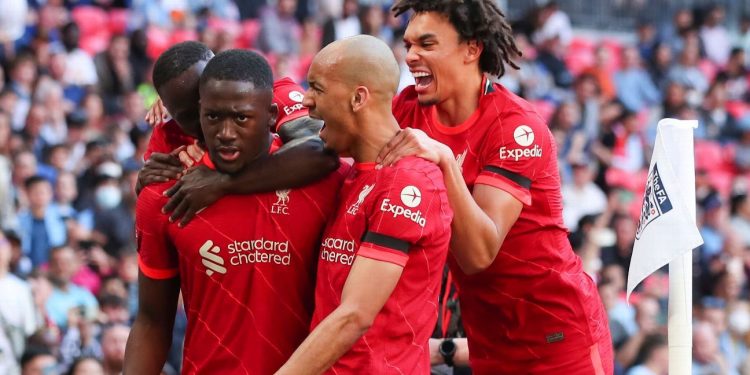 
The debate over which of Liverpool or Manchester City are superior at full strength will continue for some time but the Reds are beginning to make an irresistible case for possessing the better squad.

Liverpool’s hunt for four major trophies is still alive with a 3-2 FA Cup semifinal win at Wembley on Saturday as a result of Liverpool’s greater strength in depth. Manchester City undoubtedly endured the harder Champions League quarterfinal engagement this past week — Liverpool had the luxury of a two-goal advantage heading into their second leg at home against Benfica while Pep Guardiola’s side went to Atletico Madrid with their tie firmly in the balance — and City were unable to hide their scars.

Pep Guardiola made seven changes for Saturday’s match to try and freshen up his team, having chosen to fly from Madrid direct to London on Thursday and train at Millwall on Friday to offset any fatigue. Yet City were a shadow of their best selves, unable to cope with Liverpool’s intensity from kick-off and further undermining their display with a host of individual mistakes.

Ibrahima Konate headed in Andy Robertson’s ninth-minute corner — his third goal-scoring game in a row — as Nathan Ake and Gabriel Jesus made a mess of defending a routine set-piece. Zack Steffen tried and failed to replicate Ederson’s composure when these two sides met six days earlier. Ederson was almost closed down with the ball at his feet on the goal-line by Diogo Jota only to play a casual pass out to alleviate the danger. Steffen, however, got the ball stuck under his feet from a simple John Stones back-pass and Sadio Mane pounced, tackling City’s back-up goalkeeper and turning the ball into the net in one motion.

When Mane fired home a third on the stroke of half-time — the product of a sumptuous move which involved Trent Alexander-Arnold beating the City press with a stunning cross-field pass to Luis Diaz and a wonderful chipped assist from Thiago Alcantara — City looked out on their feet.

Klopp described their previous meeting as a boxing match and if this also fell into that category, it was in danger of being stopped given how uncompetitive City were. There were, curiously, no City changes at the break. Jack Grealish fired in after good work from Jesus less than two minutes into the second period. Liverpool goalkeeper Riyad Mahrez for Gabriel.

Mahrez had time to register an assist, collecting Phil Foden’s pass and driving to the byline to shoot. Alisson saved but Raheem Sterling wasted good chances in added time but it was hard to escape the conclusion something needed changing earlier in the piece.

Afterward, Guardiola spelled out how stretched his group is, claiming only Kevin De Bruyne had four stitches in his right foot yesterday.

Asked if Liverpool had a superior squad, Guardiola said: “Right now, yeah. It is what it is with the season we have. We play a lot of games and we don’t have a long, long squad. When everyone is fit, it is OK but we have a few injuries and academy players on the bench.”

Klopp also made seven changes from Wednesday’s game against Benfica but they were largely to restore his key players including Mohamed Salah, Mane and Virgil van Dijk. But Konate and Luis Diaz — surely one of the best January signings in recent years — are both not regular starters who made telling contributions here, Klopp described Konate’s third goal in as many games as “very helpful” in the context of continuing to successfully navigate a punishing schedule.

“We have to try to find line-ups and formations to be in each game as recovered as possible but you need rhythm as well,” said Klopp. “I think the first half was one of the best we ever played. We did all the right stuff, we scored in the right moments, we played an incredible game in the first half, I really loved each second of it.

“The second half started with the goal for Man City and then it opens up – the quality of City is insane and you could see it was a much more open game.

“We respect the quality of City so much and it’s so difficult to win against them. But because we have these boys in our dressing room we have a chance.”

Although Liverpool look to be managing this period marginally better — reaching both the FA Cup and Carabao Cup finals for the third season in their history, no other club has managed that domestic cup feat more than twice — Klopp downplayed any conversation about also lifting the Premier League and Champions League trophies to possibly accomplish the historic Quadruple.

“The quadruple talk I can’t believe it,” he said. “This win means we have another game and then we have to play Aston Villa in a midweek, they have to move one game again.

“I don’t think we have a full free week before the last matchday — it’s all difficult but who cares?

“We came here and we wanted to go through to the final. We knew about the problems but qualifying for this final makes the quadruple even more difficult — it’s the only way to do it but it makes it more difficult as well so it’s a strange situation.

“But we are over the moon, we beat the strongest football team in the world and that’s a pretty special moment.”

City hold a one-point lead in the Premier League and could yet face Liverpool in an all-English team Champions League final next month (should both sides advance past Real Madrid and Villarreal, respectively). Few would back against City recovering but Liverpool laid down a marker here that they are more than ready for the fight.