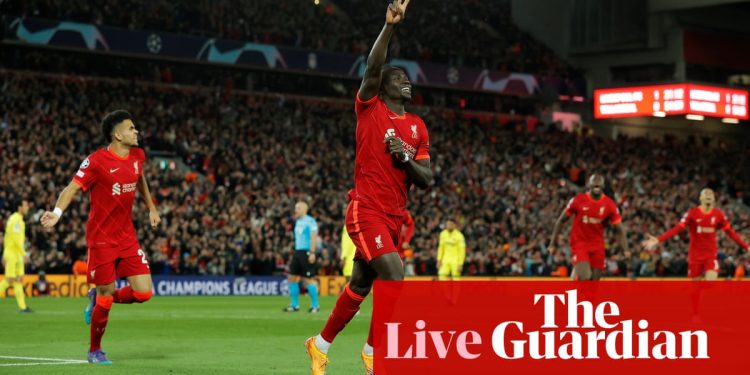 Peep! Peep! Peeeeeep! It’s all over at Anfield, where Liverpool have run out comfortable winners in the end despite a frustrating first half. A Pervis Estupinan own goal after industrious work from Jordan Henderson broke the deadlock, while Sadio Mane stabbed home from close range just two minutes later. Liverpool are in the box-seat at half-time in this semi-final tie but Villarreal aren’t completely out of it yet.

Pau Torres speaks: ““We have the feeling that we were punished for our only errors,” says the Villarreal defender. “In the first half we coped well, but in the second half we were a little overrun. In our planning we addressed the idea that they might go ahead but our plan was a little like in Munich – to stay comfortable, to cope. But our errors were really punished.”

Our chief football correspondent David Hytner was at Anfield to see Liverpool dominate their Spanish visitors and give themselves a healthy two-goal cushion ahead of the second leg.

Andy Robertson speaks: “We had a few chances in the first half, trying to break them down,” he tells BT. “We had a bit of momentum after the first goal and the noise in here was incredible. It took us to the second one. We would have liked one more but a clean sheet and two goals, we can’t argue with that.

“It is the semi-final of the Champions League. If you can’t run around for 90 minutes in this kind of game, when will you? Our intensity has been high for the last couple of games. We have had a hectic schedule but we are enjoying it. There is still work to do but we are happy.”

Jordan Henderson speaks: “They are a very organised team and we knew they would make it difficult,” he tells BT Sport. “It was just important that we kept going and believing that we would eventually break them down. We did that with two good goals.

“The first one was a bit lucky – good build up but a bit lucky, in off the defender and keeper I think. But you need a bit of luck when a team plays with a low block. We got that and it lifted the crowd. For the majority of the game, the counter-press was really good. It made it difficult for them. But the game is still alive and it will be tough in Villarreal.”

Peep! Peep! Peeeeeep! It’s all over at Anfield, where Liverpool have run out comfortable winners in the end despite a frustrating first half. A Pervis Estupinan own goal after industrious work from Jordan Henderson broke the deadlock, while Sadio Mane stabbed home from close range just two minutes later. Liverpool are in the box-seat at half-time in this semi-final tie but Villarreal aren’t completely out of it yet.

90+2 min: Villarreal win a free-kick for what looked a fairly inoccuous challenge on Serge Aurier by Fabinho. The ball’s swung in from the left and Liverpool clear. Full time.

90+1 min: Raul Albiol makes a mess of a defensive header as he gets under a ball from deep but recovers in time to prevent Divock Origi capitalising.

89 min: After a frustrating first-half, Liverpool settled their nerves qith a quick-fire double but have thus far failed to put the tie beyond a Villarreal side who have offered little or nothing going forward. It’s difficult to imagine they’ll fare much better on their own patch but considering Liverpool’s superiority, they’ll be delighted to escape with a two-goal deficit. If they escape with a two-goal deficit.

87 min: Boulaye Dia latches on to a ball from deep and shoots straight at Alisson. Offside.

82 min: Liverpool continue to dominate as their goalkeeper Alisson gets a rare touch from a back-pass. He’s been a spectator tonight – there are several Anfield ballboys who have handled the ball more often than he has this evening.

80 min: Luis Diaz rolls an inviting cross through the Villarreal penalty area but there’s nobody on hand to convert. Liverpool double-substitution: Joe Gomez and Divock Origi on for Trent Alexander-Arnold and Luis Diaz.

78 min: Also looking decidedly unimpressed: Sadio Mane as he went off to be replaced by Diogo Jota. He did, however, get a big hug from his manager and a round of appreciative applause from the Anfield hordes.

77 min: While I was taking care of that personnel admin, Villarreal won a corner and completely wasted it. On the sideline, their manager Unai Emery looked decidedly unimpressed.

75 min: Villarreal substitution I may have missed earlier: Alfonso Pepraza on for Francois Coquelin.

71 min: Rulli flaps at a cross and Luis Diaz tries to hook the ball across the face of goal. Raul Albiol hacks clear with his side in a total defensive dither.

70 min: Estupinan concedes a corner as Liverpool continue to turn the screw.

68 min: Liverpool are rampant. Luis Diaz curls a low, deflected shot wide of the upright moments after Rulli had parried a Virgil van Dijk shot from distance that seemed to swerve in various directions as it approached him.

66 min: Albiol anticipates and cuts out a Salah backheel into the path of Trent Alexander-Arnold as the Liverpool right-back went marauding into the Villarreal penalty area after linking up with his team-mate and galloping forward in anticipation of the return pass.

65 min: At the far post and on the volley, Andy Robertson sidefoots home a Trent Alexander-Arnold cross from the right. Offside and there was nothing marginal about this call.

63 min: Replays and a freeze-frame show Mane managed to stay onside by a whisker as he ran on to a beautifuully weighted short pass from Mo Salah in the Villarreal penalty area before prodding home Liverpool’s second.

61 min: Villarreal are on the ropes and in a total panic as the tie threatens to get completely away from them. Gio Lo Celso is booked for a foul on Andy Robertson.

60 min: Salah dribbles into the Villarreal box and goes down, apparently the victim of a Juan Foyth clothesline. No penalty, despite vociferous appeals from Liverpool’s players and fans.

58 min: Henderson’s been having having an ineffective game by his own lofty standards but he helped fire his side ahead. His attempted cross took a huge deflection off Pervis Estupinan, looped over Rulli and in to the Villarrealk goal. It’s gone down as an Estupinan own goal but there were, it must be said, a queue of Liverpool players waiting to convert the cross if the Ecuadorian hadn’t stuck out his leg.

57 min: No he was not. Mane’s goal survives a VAR check from Tomasz Kwiatkowski and Liverpool are two goals to the good. That’s his 20th of the season, his sixth in his past seven appearances.

Now it’s two! Sadio Mane doubles Liverpool’s lead, scoring their second in two minutes. He runs on to a weighted short pass from Salah and stabs home, but was he offside?

Liverpool are in front. A Jordan Henderson cross from the right takes a wicked deflection, loops over the outstretched hand of Rulli and into the Villarreal goal.

52 min: From a central position, Alexander-Arnold dinks a lovely ball into the Villarreal penalty area for Luis Diaz. He doesn’t connect properly with his header and Rulli gathers comfortably.

50 min: Fabinho hacks the ball home from seven yards at a Liverpool corner but his “goal” is ruled out for offside. Virgil van Dijk was offside in the build-up as Sadio Mane headed the outswinger back into the mixer.

48 min: Villarreal left-back Pervis Estupinan is booked for a foul on Salah near the edge of the Villarreal box. Nothing comes of the free-kick but Liverpool continue to apply pressure.

46 min: Mo Salah sends a cross gliding into the Villarreal box and Villarreal centre-half Pau Torres gets his head to it. Luckily for him, Geronimo Rulli was on hand to catch his inadvertently goal-bound “effort”.

46 min: Play resumes with no changes in personnel on either side.

Peep! A first half that was extremely low on quality is brought to a close by our Polish referee, Szymon Marciniak. Liverpool have dominated throughout but Villarreal’s defence has been nothing if not obdurate. The Spanish side have frsutrated their hosts, who have been conspicuously lacking a bit of cutting edge or killer pass in the final third.

45+1 min: Villarreal enjoy a rare excursion out of their own half but it doesn’t last long.

42 min: Oof! Thiago Alcantara hits the top of the left upright with a curled shot from distance.

41 min: Mane overhits a short pass to Luis Diaz on the edge of the Villarreal penalty area. Juan Foyth slides in to steal the ball with a perfectly timed if slightly risky tackle. The denizens of the Kop appeal for a penalty but none is forthcoming.

39 min: Luis Diaz is penalised for a foul on Dani Parejo near the edge of the Villarreal penalty area. The visitors are making this game as attritional as possible for Liverpool and the natives in the stands are getting audibly restless.

36 min: With Villarreal on a rare attack, Dani Parejo tries to pick out Lo Celso with a ball from the touchline. His target gets a touch on the ball but is on the stretch and can’t control it.

35 min: From the byline, Alexander-Arnold first-times a Robertson ball from deep across the the Villarreal penalty area. Salah gets on the end of his cross but steer it wide.

34 min: A Salah volley is blocked by a Giovani Lo Celso lunge. It’s a Liverpool corner, which Villarreal clear.

33 min: Liverpool keep hammering on the Villarreal door. A Mane shot is deflected past Rulli by Raul Albiol but drifts narrowly wide of the upright.

32 min: Villarreal goalkeeper Rulli parries a shot into no-man’s land but gets away with it, then Virgil van Dijk is booked for a bodycheck on Samuel Chukwueze.

31 min: Liverpool attack down the right again with ALexander-Arnold and Salah linking up to good effect. Salah tries to pick out a Mane run but Pau Torres intercepts and clears. 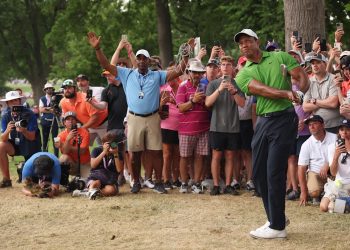