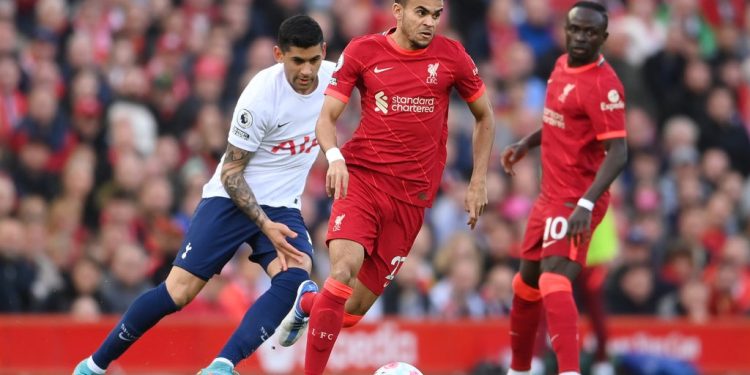 Liverpool host Tottenham tonight in a Premier League clash that will have ramifications on both the title and top-four races. The Reds are one point behind league leaders Manchester City with Spurs trailing fourth-place Arsenal by two.

Tottenham are potentially Liverpool’s toughest opponents in the remaining fixtures and earlier in the season the two sides played out a thrilling 2-2 draw in London. Jurgen Klopp knows his team cannot afford to drop points and need to keep winning to pile the pressure on City.

Victory this evening means the Reds will continue their drive towards an unprecedented quadruple. Liverpool have already lifted the Carabao Cup this season and have made it into the finals of the FA Cup and the Champions League after fighting off a Villarreal comeback to win 3-2 on Tuesday night and progress 5-2 on aggregate.

Meanwhile, Antonio Conte’s side can spoil the Reds’ quadruple chase as Spurs arrive at Anfield desperate for a victory to aid their own top-four bid. Three points would put them above the Gunners – who face Leeds tomorrow – and ensure they are within touching distance of the top four ahead the crucial north London derby on Thursday.

Follow the action and updates as Liverpool take on Tottenham at Anfield:

15 mins: Great defending! Pierre-Emile Hojbjerg comes over to the right side and receives the ball. He chips it into the box for Harry Kane who chests the ball down and looks to shoot only for Jordan Henderson to slide across him and take the ball out from under the striker’s feet.

12 mins: Another counter-attack comes from a Liverpool clearance. Henderson passes the ball up to Mane who threads it behind the Tottenham defence to play Salah free on the right. He carries the ball into the box, cuts inside onto his left foot and shoots but his effort is blocked and goes out for a corner.

9 mins: Nearly. The pace of this game is lightning in these early stages. Son Heung-min is played into the right side of the box and squares it into the middle. Alisson palms the ball away but it drops to Rodrigo Bentancur who shoots and sends the ball straight back to the goalkeeper.

Liverpool then fly up the pitch with Jordan Henderson driving the ball forward. He passes it to Luis Diaz who feeds it up to Sadio Mane. Mane sends it wide to Mo Salah but his pass into the penalty area doesn’t find a teammate.

6 mins: Mane has a first sight at goal with an effort from range that he puts straight down the throat of Hugo Lloris. Liverpool are quick to win the ball back and Trent Alexander-Arnold’s switch of play it headed clear by Emerson Royal.

Tottenham are shaping up with five at the back when they’re out of possession. It’s not going to be an easy night for Liverpool.

3 mins: Close! Andy Robertson bombs down the left side and gives the ball to Luis Diaz. Emerson Royal and Dejan Kulusevski close him down but he squirts away from them and brings the ball into the box. It comes across to Trent Alexander-Arnold who flicks it back into the middle. Robertson wins the header and nods it over to Sadio Mane who misses the ball as he attempts to volley it on the spin.

Dejan Kulusevski kicks off the match for Tottenham who then float the ball over to the left side of the pitch. Ibrahima Konate comes out and meets the ball in the air nodding it out for a throw in.

The players make their way out onto the pitch at Anfield. The Liverpool fans are out in full voice yet again. The Reds will move to the top of the Premier League table if they win or draw tonight.

If Spurs pick up three points they’ll move into fourth ahead of Arsenal.

Mo Salah is set to play his 250th game in all competitions for Liverpool. Salah’s next Premier League goal will be his 118th for the Reds, matching Michael Owen’s tally for the club.

Only Robbie Fowler and Steven Gerrard, with 128 and 120 goals respectively, have netted more for the Merseysiders.

Spurs have scored multiple goals in 11 of their last 16 league games, but failed to score in the other five matches. They are vying to keep a clean sheet in a fourth consecutive Premier League away fixture, which would equal their club record.

Liverpool have earned 12 successive league wins at Anfield and are unbeaten in 21 top-flight home matches, scoring 52 goals and conceding nine.

The Reds have won each of their last five Premier League home fixtures without conceding – a sequence they have only bettered with an eight-match run between October 2005 and January 2006.

They have claimed 40 points from the last 42 available, only failing to win in April’s 2-2 draw at Manchester City. They have kept 11 clean sheets in those 14 games.