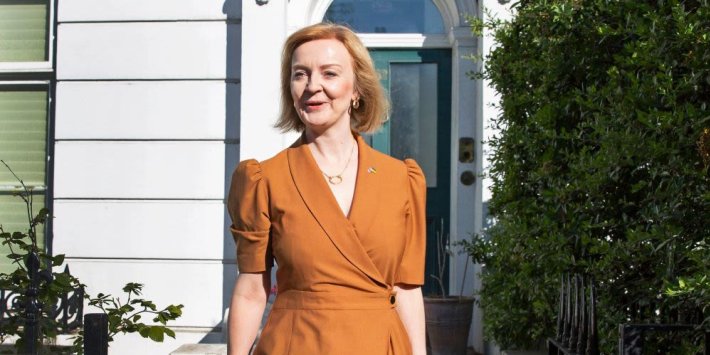 Liz Truss faces one of the most important weeks of her life as she attempts to court enough Tory MPs from the right of the party to reach the final two in the race to succeed Boris Johnson.

While the Foreign Secretary has long been seen as a frontrunner to replace the Prime Minister, now that the competition is actually underway, she has been accused of launching a flat campaign and after two rounds of MP voting, is lingering in third place behind Rishi Sunak and Penny Mordaunt.

Truss received votes from 63 Conservative MPs at the last round of voting on Thursday afternoon, putting her in third behind Rishi Sunak (101) and Penny Mordaunt (83).

Simon Clarke, the Truss-baking Chief Secretary to the Treasury, admitted that it was a “difficult round” for her. A poor showing in Friday night’s televised debate will not have helped the mood in her camp.

Tory MPs will hold three more rounds of votes on Monday, Tuesday and Wednesday in order to whittle down the remaining candidates to just two. The successful pair will then spend several weeks partaking in hustings before Conservative party members choose the winner, to be announced on 5 September.

As things stand, Sunak is expected to have enough MPs on board to secure his place in the final two. Mordaunt’s strong early performance, which has largely caught Westminster by surprise, has put Truss under pressure to find the votes she needs as other candidates drop out of the race if she is to leapfrog the Trade Minister into second place.

Truss’ campaign received a timely boost on Thursday when she was endorsed by staunch Brexiteer Suella Braverman, who was eliminated from the contest earlier in the day.

While Truss voted to stay in the European Union in 2016, her long-running effort to demonstrate that she believes in the Brexit project, illustrated recently by her hardline approach to the Northern Ireland Protocol, has convinced some Leave-voting Tory MPs that she is on their side.

It’s for this reason that her campaign will hope to ensure a significant chunk of right wing supporters come her way rather than defect to right-leaning Kemi Badenoch now that Braverman is out of the race. Braverman has urged her backers to get behind Truss, arguing that Badenoch will not be able to make it to the final two.

“Kemi is a great woman and a friend. She could do a fantastic job as PM one day but we need to look realistically at the numbers,” she said.

“Liz and Kemi are not both going to make it into the final two. So a decision needs to be made to back one of them. The one we should back, I’d argue, is the one who can get to the final round: Liz can, Kemi cannot.

“Liz is undeniably the better placed candidate to get to the voluntary party round, and fight there for the things that all three of us believe.”

It’s by no means guaranteed that the 27 MPs who backed Braverman will switch to Truss on Monday, however.

Following the first of several planned televised leadership debates on Friday, snap polling by Opinium showed that just 6% of voters any affiliation, and 10% of Conservative voters thought Truss performed the best, putting her bottom of the five candidates on both counts.

Tonight we asked over 1000 normal voters to watch the debate and we have just asked them who they thought performed best.

Mark Francois, who chairs the European Research Group of avidly pro-Brexit Tory MPs, received a backlash from ERG members when he urged them to throw their weight behind Truss.

The ERG, which is comprised of around 50 Tory MPs, has probably been the most influential Tory party group in recent years, playing a key part in Theresa May’s downfall and Johnson’s subsequent campaign to replace her. Tory leadership candidates are walking on eggshells to ensure that they don’t say anything that ERG members might see as failing to honour Brexit.

Andrew Lewer, the MP for Northampton South, said those in the group would “make up their own minds” and declared his support for Badenoch, who finished fourth with 49 votes on Thursday. Lee Anderson, the MP for Ashfield, said he was “really disappointed” with Francois and that ERG members were “free thinkers who are able to make our own minds up”.

A senior member of the ERG told PoliticsHome that the group’s members would vote in different ways when the next ballot is held on Monday, despite Francois’ attempt at a call to arms on WhatsApp.

“We’re not a military organisation,” they said, pointing out that the ERG leadership was split between different candidates – Truss and Braverman – earlier in the contest.

Truss’ struggle to “unite the right” at this stage of the contest means there will be added pressure on her to perform strongly at the several TV debates that are taking place over the next few days.

However, the current belief within the party is that even if Badenoch does gain the support of numerous Braverman backers heading into next week, she will almost certainly be eliminated from the contest to succeed Johnson on Tuesday, with most of her supporters then rowing in behind Truss.

Truss and Mordaunt have refused to sling mud at one another, despite facing a tense race for the final ballot.

The latter refused to retaliate at Truss backer Lord Frost, the UK’s former Brexit negotiator, who has launched a series of ferocious attacks on her in recent days.

Frost on Thursday said he asked Johnson to remove Mordaunt from his negotiating team because she was not up to the job, and then on Friday wrote a stinging op-ed insisting that “I don’t believe that a government led by her could succeed.”

A Mordaunt campaign source told PoliticsHome she was “determined to keep this a clean contest, and has huge respect for all candidates in this process”.

They added: “We won’t get drawn in to needless criticisms of colleagues.”

Frost’s interventions also received backlash elsewhere in the party, even among those not supporting Mordaunt.

Conservative MP Simon Hoare, who is backing Sunak, tweeted: “I don’t wish to be rude BUT who the hell is an unelected, failed Minister to tell any MP what to do? For some unknown reason David Frost perpetually thinks we give a flying xxxx what he thinks. We don’t and we won’t.”

However, PoliticsHome understands that his warnings about Mordaunt’s ability have been privately noted by Conservative MPs as they look ahead to next week’s crucial votes, with one senior MP describing Frost as a “very, very influential figure” within the parliamentary Tory party.

“Frost is without a doubt one of the most influential members of the Conservative party,” they said.

“If he were in the House of Commons rather than the House of Lords, people would be suggesting that he should run for the leadership. They pay very close attention to what he says.”

If seven days ago you had offered Mordaunt the second largest number of votes from Tory MPs and nearly every opinion poll presenting you as the most popular candidate with party members heading into this weekend, the former magician’s assistant would likely have snapped your hand off.

Yet despite her momentum, Mordaunt may not get the opportunity to test her magic on the Conservative party members if Truss succeeds in uniting the Tory right behind her.