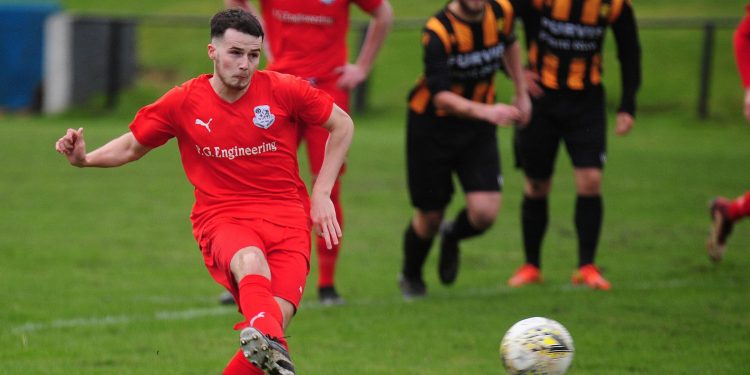 The Haws won a key ‘six point’ Premier League relegation battle away from home, while the Welfare continued their pursuit of Conference B leaders, Glenrothes, with a derby win at Lochgelly.

A CRUCIAL win for the Haws which has taken them out of the bottom four sides in the Premier League.

In what was a classic six pointer, bottom side Whitehill were in no way going to be easy pickings for Hill of Beath and in the early stages both sides found it difficult to come to terms with the sodden pitch and strong wind.

However, Haws started to gain the upper hand, with the elements in their favour, and they took the lead through an own goal.

Lewis Elder did well on the left hand side and his cross saw Daniel Watt almost connect, but the ball hit a defender and rolled into the corner of the net.

Whitehill found it hard to get back into the game and the Keirs Parkers created some openings and on the half hour the second goal came when a ball into the box as collected by Elder, and as he got ready to shoot, he was pulled down.

The striker got up, dusted himself down, and fired the spot-kick past the ‘keeper.

Things were looking good for the visitors, but just before the break Whitehill were awarded a free-kick on the edge of the Haws’ penalty area and the shot from the award was blocked by ‘keeper Stuart Hall, but the loose ball bounced off Russell Grierson and over the line.

A goal to the good at the break, the Haws faced the gale in the second period but quickly took a grip of the midfield and created a couple of good chances but the home ‘keeper was in good form.

With 20 minutes to go, however, they got the important third goal when a good Haws move down the left saw a well flighted cross sent over and when Ross Allum dummied the ball Watt fired it high into the net.

Whitehill struggled to create many good openings, but in time added on they were awarded a penalty after a foul in the visitors’ box, which was converted but there was hardly time for the game to re-start.

The win sees Haws on 25 points, in 14th spot in the table, three points ahead of Blackburn United and manager Jason Dair was pleased to see the club’s unbeaten run in all competitions extend to five games: “The wind was a problem but we played well in a real six pointer and deserved the win.

“However, we have to look to keep that form going in our last 11 games to try and get well away from the bottom four sides.”

AN emphatic Conference B win for Lochore which keeps their hopes of finishing in the top two of the table very much alive.

The Welfare took the lead in only two minutes when former Berts striker, James Gunn, went down in the Lochgelly box and Robbie Crawford converted from the spot.

The strong wind, and glue pot surface, made quality football difficult but Lochore, playing against the elements, kept going forward and in 25 minutes Joe Kirby’s pass opened up the chance for Logan Donaldson to double the lead.

The Berts were finding the going tough, despite having the wind, and were unable to create many clear chances and five minutes from the break Lochore grabbed a third.

A Kirby shot was spilled by Lochgelly ‘keeper, Sam McGuff, and Gunn was lying handy to slip the ball into the net. McGuff was injured in the goalmouth scramble that led to the goal and had to be replaced by an outfield player as the Berts had no sub ‘keeper for the match.

The Welfare started the second period looking to increase their lead and in 55 minutes Matty Christie and Kirby combined to create a good opening for Donaldson who finished well.

Lochgelly were working hard at trying to deny Lochore space but in 65 minutes a fifth arrived for the visitors when a Kirby shot was blocked on the line but Donaldson was on the spot to score, to complete his hat-trick.

The Berts kept battling away but Kirby saw the woodwork twice deny him, and saw three efforts from him cleared off the line by the hard working home defence.

However, in time added on Lewis Kerwin grabbed a consolation goal for the Berts with a close in finish.

The win takes Lochore onto 38 points from 19 games in fourth place, and eight behind second top Oakley United, with two games in hand and manager James Adam wants his team to look to win all their remaining nine games to put pressure on the top clubs.

He said: “The conditions were really awkward but we played some good stuff despite that and created a lot of chances.

“Logan Donaldson took his hat-trick well and Joe Kirby was so unlucky not to score.

“We can still finish second in the table and that will be our aim and in the closing games we have to maintain our goal scoring output which has seen us hit 48 in 19 games.”

Lochgelly chairman Jock Kinnell lamented another disappointing day for his team who sit on 13 points from 21 games: “Losing our goalkeeper before half-time was a bad blow and typical of our luck of late.

“But credit to Lochore, they are playing really well and thoroughly deserved their win.”