Lochgelly: Vandalism carried out at football club in Fife 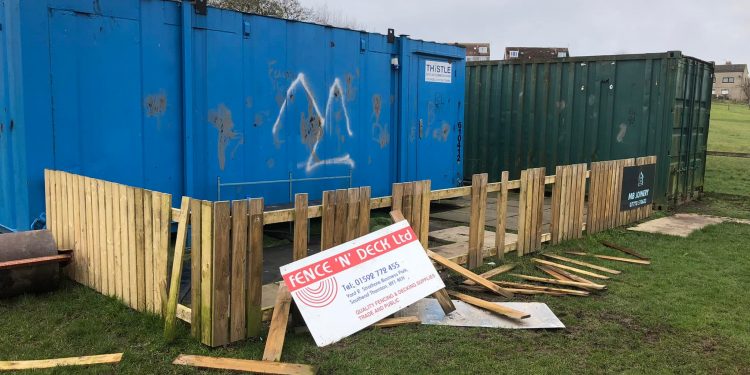 A LOCAL football club has suffered from a ‘massive kick in the teeth’ after vandals struck.

Lochgelly United’s Moore Park, off the Public Park, has been targeted with boards significantly damaged.

In a social media post, the club stated: “We have no idea why anyone would want to do this but yet again we are on the receiving end of mindless vandalism!

“We can only apologies to the board sponsors, we will endeavour to replace these.”

The post from the club went on to state that they, “feel like a broken record”, talking about vandalism and damage carried out.

“This is another massive kick in the teeth, and will hurt us in the pocket,” the club said.

“If any of our followers have any smart ideas to help us raise the last of the cash for our more vandal proof metal fence please feel free to share we are all ears?”

The Times told you in this week’s paper, out today (Wednesday), that the club has also been affected by dog walkers and mess their pets have left on the pitch.

It has been used by dog walkers in winter months and it has had an impact on the grass.

The amateur side posted photos on social media of the condition of the pitch, and pleaded with dog owners to think twice before deciding to walk over it.

In a statement on Facebook, the club highlighted the “growing problem” which included dog mess not being picked up by owners, and sticks for the dogs left scattered across the pitch, which could seriously injure a player during a match.

“We have noticed over the winter the amount of people using our pitch to walk their dogs increase significantly,” the club stated.

“We would ask please, could dog walkers avoid this?

“The main reasons being; dogs scratching causing surface damage; we are continually lifting dog poo which is a serious hygiene issue; the sticks thrown for dogs (42 removed today, March 8, alone ) not only have the ability to cause injury but also cause significant damage to the mower blades; we regularly treat the park with fertiliser, sprays which although are approved for use in public areas may not be ideal for dogs.”

Lochgelly United went on to state significant funds have been spent on the football pitch in recent years, and added that they would be thankful to those who now decide to walk their dogs in other locations.

The post continued: “We have invested in excess of £20,000 on maintaining this football pitch in the last three years, making it the excellent playing surface it is – please respect that this is a paid for facility that is for playing sport on, not walking dogs.

“This isn’t a message to cause arguments we simply want to share what goes in to maintaining the pitch and the issues using it to walk dogs on is causing us! Thanks in advance for your cooperation.”

Radiohead side project The Smile to share new track this week

Quantic Dream’s Workforce Up By 50% In 2021, Currently Working On 3 In-House Titles

Quantic Dream's Workforce Up By 50% In 2021, Currently Working On 3 In-House Titles