The northern horizon in North Carolina and Virginia west to Northern California is forecasted to take on a green color as particles from a solar storm interact with the upper atmosphere. With just a few clouds forecasted across central North Carolina into Virginia Thursday evening overnight into Friday morning, conditions are ideal for sky watching.

While we won’t see the spectacular ribbons of color you may have seen in photos, conditions are right for residents as far south as New York City, to Portland Oregon to see auroral activity overhead. 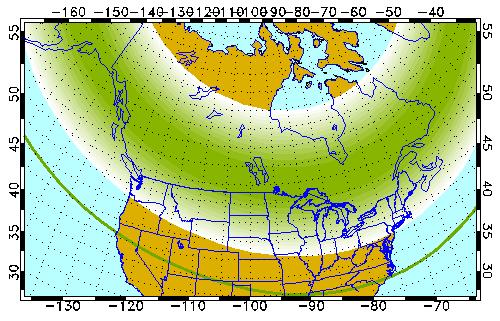 Our Sun occasionally burps, in the form of a surface eruption that sends super heated gas along with a few billion tons of material out into space. A coronal mass ejections (CME) occurs when magnetic field lines looping of the Sun’s surface, many times larger than the Earth, get twisted and snap.

Earth is protected by a doughnut shaped magnetic shield which channels the constraint stream of energy and small particles (solar wind) around the planet. The huge bubble of charged energy and particles released by a CME can travel down those magnetic field lines to the hole in that magnetic doughnut and into the atmosphere.

These particles interact with gasses in the upper atmosphere creating light displays in the north (Auroral Borealis) and south (Aurora Australis). Oxygen gives off green and red light. Nitrogen glows blue and purple. 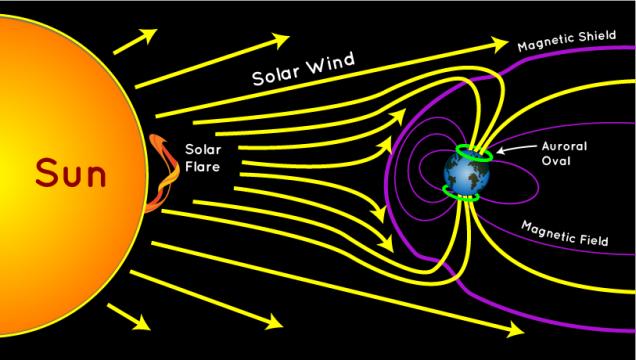 The stronger the CME, the further south these displays are visible. Some are larger and travel faster, up to 2000 miles per second. On average they travel about 300 miles per second, crossing the nearly 93 million miles between the Sun and Earth in about 3.5 days. Not all those releases are in the direction of Earth either.

Jupiter And Saturn To Join In Great Conjunction On Solstice - NPR

Christmas Star, not seen in 800 years, will light up on longest night of the year | TheHill – The Hill

Jupiter And Saturn To Join In Great Conjunction On Solstice - NPR

Are Kehlani and SZA dating? Fans speculate after pair hold hands in LA!