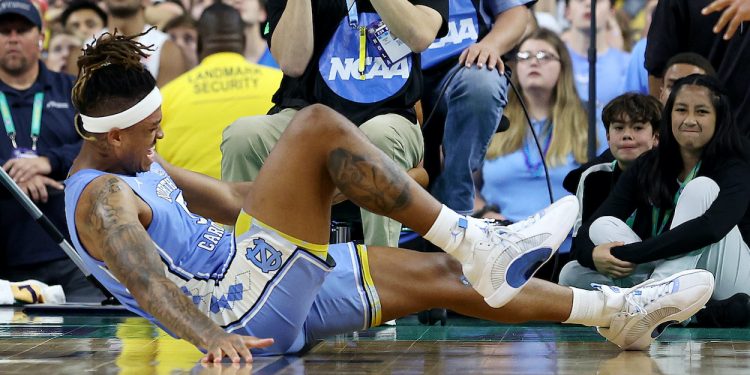 
Two days after suffering a sprained ankle in North Carolina‘s historic win over Duke in the Final Four, Armando Bacot heroically battled through the pain to put up 15 points and 15 rebounds against Kansas in the national championship game. With less than a minute remaining, the junior center drove to his right and created enough space for a layup that would’ve given the Tar Heels a one-point lead.

Only, his injured ankle gave out as he tried to push off toward the rim. Bacot left the game and couldn’t return, and he had to watch from the bench as UNC missed a heave at the buzzer to lose by three in the end.

Upon further review, the makeshift court inside the Superdome appeared to buckle when Bacot tried to push off his right foot.

Armando Bacot made NCAA Tournament history in the championship game

North Carolina wouldn’t have gotten this far without Armando Bacot.

The physically imposing center dominated the paint all NCAA Tournament long. Over the course of UNC’s tourney run, Bacot averaged 15.3 points and 16.5 rebounds per game. He even put up two 20-rebound performances in a row against Saint Peter’s and Duke to power the Tar Heels to the national title game.

In the championship, playing on a freshly sprained ankle, Bacot tied a team-high with 15 points and snatched a game-high 15 rebounds. He also became the first player in college basketball history to record six double-doubles in a single NCAA Tournament.

It was a brilliant postseason run for Bacot and North Carolina, but it eventually came to a frustrating end.

Loose floorboards may have cost Bacot and UNC a title

Bacot clearly wasn’t 100% in the national title game Monday night, but he still hobbled his way to an easy double-double and put his Tar Heels in position to win in the final seconds.

But with less than a minute left on the clock and UNC trailing by one point, Bacot re-injured his right ankle on a drive to the basket that seemed destined to end in an open layup. When he planted his right foot to go up for the shot, though, the Superdome floor gave out. You can see the floorboards shift on the replay of the drive.

“I thought I made a good move,” Bacot told reporters after the game. “I thought it would have been an easy basket.”

That easy basket would’ve put UNC up by one point with about 45 seconds left in the game. Instead, with North Carolina trailing by one, Bacot had to leave the floor. Kansas center David McCormick took advantage of his absence on the next possession with an easy bucket in the paint to push the lead to three.

The Jayhawks went on to win the championship game, 72-69, but the ending could’ve easily gone the other way had the floor never given out underneath Bacot’s injured ankle.

Hosting Final Fours inside massive football stadiums has become the norm in college basketball. The large venues allow for more fans inside the building and a bigger stage for the final three games of the NCAA Tournament.

The problem? These venues must build the courts from scratch, and they’re propped up on a platform for the best viewing experience for fans. Now, I’m not claiming to be a basketball court expert, but watching a makeshift floor give out on the most important play of the season can’t be comforting for North Carolina fans.

It might be time to say goodbye to football stadium venues in the name of player safety.

Pension, Isa or Lifetime Isa: What's the best tax-friendly investment for you?

Pension, Isa or Lifetime Isa: What's the best tax-friendly investment for you?