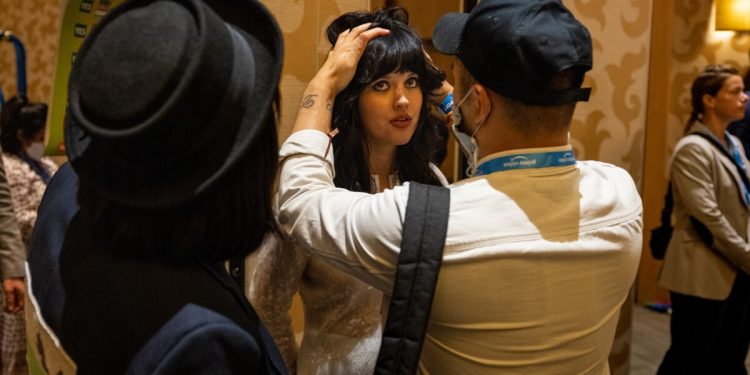 It’s been nearly a year since Amazon Prime Video announced the Sept. 2, 2022, premiere date for its highly anticipated “Lord of the Rings” spinoff, “The Rings of Power” — a year of first looks and Super Bowl teaser trailers and speculation about whether the series could possibly hold a candle to Peter Jackson’s magisterial 2001-2003 film trilogy. Now that the wait is nearly over, The Times is getting up close and personal with the cast.

Set thousands of years before the action of J.R.R. Tolkien’s beloved fantasy series, “The Rings of Power,” from showrunners J.D. Payne and Patrick McKay, features a sprawling ensemble, including Morfydd Clark as Galadriel and Robert Aramayo as Elrond, two characters familiar to “Lord of the Rings” fans. Many of the cast joined in for the series’ Comic-Con debut on Friday — and exclusively embedded with the group throughout the day was Times photographer Jay Clendenin. He captured a full range of images from life inside the Comic-Con bubble, from cast members’ morning glam routine to the mayhem of Hall H to the afterglow of a successful bow at the year’s biggest fan gathering.

It’s not quite as epic in scope as “Lord of the Rings,” but it’s more than enough to tide you over until “The Rings of Power.” —Matt Brennan