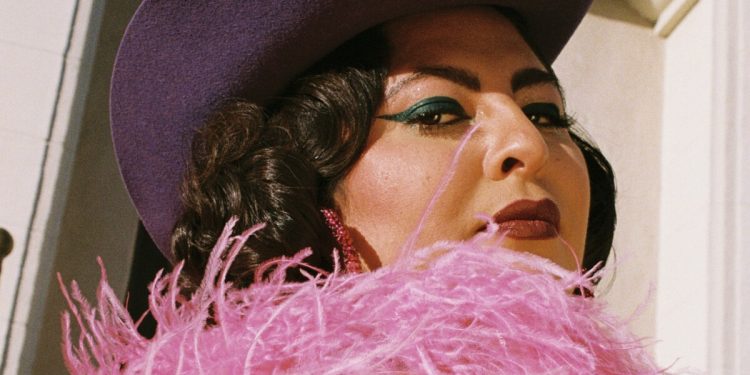 
San Cha sings from a divine place. Ahead of her upcoming spring releases — double singles titled “Processions” — the queer ranchera artist describes her path to enlightenment through song.

I think music is very spiritual. It can be secular, but in Indigenous cultures, music comes from a sacred place first. And when you’re singing the same things over and over and over … how could that not be a spell? How is a song not a prayer?

I was born and raised in San Jose. I grew up singing in the church choir. We grew up very Catholic. My parents were undocumented. They came here from Jalisco. We lived in a one-bedroom apartment with my uncle, who had his wife (and who had a daughter), my little brother and her little sister. I wasn’t really allowed out of the house unless it was for school or for church. Everything revolved around that. I didn’t go to the movies. I didn’t go to restaurants. I didn’t do anything that wasn’t affiliated with the church. My parents were that strict. They used to pray the rosary every day.
My favorite songs to sing in church were the ones we sang during Lent season — Christ’s final days, the 40 days and 40 nights. That’s when he’s losing faith in everything and everyone. I was like, Oh, I identify with this: the most solemn minor chords. The goth s—. But it’s because you can see his humanity.

We all have those moments where we’re at our lowest and have no hope in anything. My parents didn’t accept me, so I had to live in this kind of underworld. At 13, I learned guitar from my choir instructor. He thought my parents would love to hear boleros — but my mom was like, “Why doesn’t he have you play rancheras? I don’t like romantics.” It was very repressed.

But there was this CD set that my dad had, 100 songs by various Mexican artists. That’s when I first started hearing ranchera music — like Lola Beltrán. Amalia Mendoza was one I really liked; her voice was so haunting. She sang like with a lot of unf! A lot of feeling. I never heard anyone sing like that before.

And there was Juan Gabriel, who had his choir — and a mariachi band and an orchestra — but he still had space to dance around and be theatrical, holding his goblet of wine. That’s how I wanted to be.

I went to study music at St. Mary’s College in the Bay Area. I thought my parents would be happy that it was Catholic. They only had four music majors in the whole school. I took formal lessons — like in European classical music — but I thought they were trying to change me. I would have nightmares in music theory.
In college, I was seeing all these white girls be really slutty and naked. I had been so sheltered, and [didn’t have] full sexual experiences before that. I went from having my first drink and making out with dudes to having my first boyfriend, and moving in with him before I dropped out of school.

My best friend from high school went to UC Berkeley. Even before he was out, he would take me to the gay bars in San Francisco. By then I was already making out with girls — while having a boyfriend. My friend and I didn’t even have to talk about me being queer. He already knew. I didn’t really come out. It was like … I’m just doing whatever I’m doing!

After dropping out of college, I stayed a few months at my aunt’s farm in Jalisco. She was like, “You’re here with torn-up clothes. You don’t have money. And obviously whatever you were doing is not right — you should sing rancheras.”

I had my recording equipment. So I took her iPod and found some songs that I liked. I covered a mariachi song by Linda Ronstadt — I sang it in my lower register and doubled it, adding some harmonies. I played the guitar and added these little violin synths. I recorded seven covers and burned a CD for my aunt — then she passed it around to all my other aunts. Then they traded it around the whole town. My music became this huge family thing that unified the genders — it brought everyone together.

I moved to Mexico City because my friend offered me a room. I thought, “I’m going to make it out there.” My neighbor said, “You just need to learn three songs to sing at restaurants. I was singing for these taqueros in this Zona Rosa when it hit me — a moment there where I just like, belted out. I let my voice loose and it felt free. Something clicked.

“Sancha” means “mistress” in Spanish; “san” is the word for “saint.” I started going by San Cha in 2009. I think that happened organically because I already had a first name and a middle name. My family would call me Annabel, and in school they’d call me Lisette. I was already living with a split personality.

Naming yourself is powerful. At that time, I didn’t know anything about gender politics and stuff like that, or queerness even. But later, I saw all my friends changing their names and presenting as different genders. I already did it without knowing it.

Buy a copy of Function

It’s true what they say: ain’t no party like an L.A. party. Image magazine is back with Issue 9, the first issue of 2022.

Back in San Francisco, at Q Bar, we met Persia. She is my drag mother now. I thought she was pretty. She was very friendly and generous from the beginning and introduced me to all her artist friends who did drag. And as soon as she heard that I made music, she was like, “Come do it in my gallery.” She used to perform at this bar called Esta Noche. I don’t think it exists anymore, but it’s on 16th and Mission. And she would perform there every Thursday and Saturday to two shows on Saturdays. It was all Latina queens. They eventually started letting me downstairs with the girls to get ready with them. And they don’t let anybody down there.

It was interesting watching these queens. When I was not blacked-out drunk, I was studying them — their performance of femininity. Seeing how they exaggerated femininity. I was like, “Me too! Tits up!” But I wasn’t a lip-syncer. I wanted to sing in my own voice. I joined this band called Daddy’s Plastic in the Bay — we would all dress in drag and perform and jump around in shorts.

When I took a gender studies class in San Francisco, something I read always stuck with me: Gender is performance. I’d been taught to perform femininity in a strict way. If I said, “I don’t want to wear that dress,” my mom would be like, “Well now you’re going to wear that for 10 days straight.” It was a way of asserting her dominance. She wanted me to be this normal femme queen. The gets-a-husband kind of femme.

But then I had this aunt who would visit us from Mexico, and she would stay with us all the time. She’s one of my dad’s younger sisters. She was the Cool Tía for sure. We always called her Tía La Güera because she’s so light-skinned. She bleached her hair blond and wore really tight Bongo jeans — so tight she had to lie down to put them on.
When she came to visit, I would help blow-dry her curly hair. Then she would take me shopping because she wanted me to translate. She made me smell all these perfumes that made my head hurt. She’d tell me about the club. She would flick the lights to make it strobe-y, and she’d be like, “This is the club!” I looked up to her a lot.

I moved to L.A. in 2015, and I joined a band right away. I found a band before I even found a job. When I got here I said, “I’m going to form my band with no men” — unless they were gay men. But now I’m like … if you’re kinda weird? If you’re an alien making alien sounds? You’re perfect. You’re going to be with me forever.

I was invited to play at this party called S.C.U.M. in 2018 at the Echoplex, and it was like a queer, brown punk party. Limp Wrist performed with two other punk bands and this trio mariachi called La Victoria. I sang two rancheras with them, before Limp Wrist. And I was so surprised — the punk kids were quiet, for once — and they were singing back the songs and really identifying with it.

That was the moment I felt, “This all fits together!” Because [in Mexico] my aunt was telling me it doesn’t. … Even in San Francisco, I felt like none of it fit together. But when I came to L.A., it’s like the right space found me.

And it keeps finding me, you know. When Bardia Zeinali, the director of [Kacey Musgraves’ 2021 film] “Star-Crossed” scouted me, I thought I would be an extra. It was on a Zoom call that I realized — still drunk after a friend’s birthday party — that it was actually an audition. The sheet said they were looking for someone like Amanda Lepore or Queen Latifah to sing in front of a church, to the people in the pews. Their choices were between a lesbian and a queen? I guess somewhere in the middle was me!

It felt very fitting to be back in church. I felt like I came full-circle. But church to me is something different now; when I moved in with my partner, one of my dreams was to have this place where my friends can come over and we can just sing all night until 4 a.m. That feels like church to me. My queer church.

I thought of those moments when writing my [series of] double singles — there are four of them, and they’re each called “Processions.” They’re all leading up to this ceremony which will culminate in the album. I’ll release each double single in April, May and June. (You know, after Lent.)

I still pray; these days I pray to the moon. The tides. The water. I feel like every time I’m writing a song, it’s like I’m imitating the way water moves. Wanting to be in tune with that because we are water. And when your voice is connected with the air in the right way — and you just feel it coming out of you, like Ohhhh! — that’s when the heavens have taken you.