Love Is Blind’s Shayne SLAMS Natalie In Tell-All Interview –- And She Hits Back Hard At ‘Disgusting’ Ex! 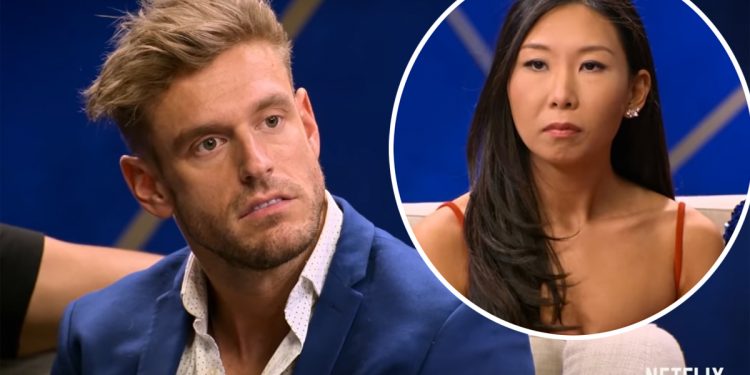 
Buckle up, Perezcious readers, because while season 2 of Love Is Blind has already ended, the drama is far from over — at least between Shayne Jansen and Natalie Lee right now!

The 32-year-old sat down for an interview on Bachelor vet Nick Viall‘s The Viall Files podcast and did not hold back when discussing his former fiancée. Shayne revealed on the episode that he and the 29-year-old consulting manager had actually tried dating again after filming wrapped, claiming:

“We reconnected four times after the show. We tried four times, just recently this past weekend.”

Four times? Sounds like it keeps not working. Why?

The reality star says he became fed up when she called him a “disgusting human being” during a recent chat over the weekend — and decided then and there it was completely “over” between them:

“I am now, yeah, officially. Yeah, it’s over. Actually for the first time, I can confidently say that. If you’d asked me that a week ago even, I wouldn’t be able to answer that question for you.”

According to Shayne, many of their issues stemmed from Natalie not being sincere when cameras were rolling, claiming she often acted a different way when it was just the two of them. He says the former couple discuss their on-camera conversations beforehand, all at her behest.

He’s straight up calling her a fake!

Eventually, this all boiled over into the off-camera fight before their wedding, which influenced Natalie’s decision to end their engagement. Shayne said it all went down on the night of their bachelor and bachelorette parties when the girls ended up crashing the boys’ evening — and Natalie became angry with him for drinking too much:

“This had been weeks of buildup, weeks of buildup that was seen off-screen. She would always pick and pick, pick, pick little things I did wrong and never appreciate anything I did right for her all of the time. She made sure on camera to show off but outside the cameras, not even close.”

Their conversation ended up being so bad, Shayne claimed he told producers he wanted to end things with Natalie:

While the Netflix personality admitted he told Natalie he “hated” her at one point during the fight, a comment he feels bad about now:

Another point of contention between the former couple? His connection with Shaina Hurley in the pods. Shayne slammed Natalie for not confronting Shaina about her attempts to win him back. Claiming the producers cut out that scene, he says now that rather than fight for her man, Natalie chose to literally run away from the situation:

And although he thought his conversation with Shaina on the show went well, Natalie had criticisms for him when they returned home:

“She wants me to do all of this stuff and I’m doing all this stuff wrong, but then when she does it and it’s right in front of her, like, ‘Why don’t you grow up and why don’t you man up with this stuff with her? Call her out on her stuff?’ Why do I have to do it all?”

Shayne clarified there’s absolutely nothing going on between him and Shaina, who actually got engaged to Christos Lardakis following Love Is Blind filming:

“Me and [Shaina] hung out once in a group setting, never alone, never hooked up. We kind of bonded on the fact that we were both getting murdered on the show. It was nice to talk to someone who was going through it. She is a good person. We all have things we have to work on. I don’t know her that well, but I don’t think she deserves what she’s getting all the hate for either.”

“There’s nothing there. She’s engaged, she’s happy. I’m happy for her.”

Talk about this breakup becoming messy — especially since Natalie decided to respond to his claims. And let’s just say, she did not seem too thrilled by her ex’s accusations!

On Wednesday, Natalie took to her Instagram Stories to clear a couple of things that came up in Shayne’s interview that might have not been 100 percent true. She began her open response to fans:

“Yes I know about the podcast and am very shocked by what was said.”

First, she denied that any of their conversations were scripted, saying:

“Regarding the comment about me ‘scripting’ our conversations: I never told Shayne what to say nor did we ever discuss or plan what to say in certain scenes. I did, however, set boundaries with filming — specifically I asked him to not drink alcohol before ‘serious’ scenes and to not share in-depth details of our intimacy out of respect for my family.”

That does sound fair — and not at all like planning out conversations.

Natalie then insisted that she never ran from Shaina, adding that other cast members saw the whole thing go down, too:

“I had the conversation with her but it did not air. All the cast members were present for this scene, including Shayne.”

“I was frustrated with Shayne that day because I heard he said something negative about me behind my back to one of the cast members when I was a few feet away, and I let him know I thought it was disrespectful. Several cast members were present for this conversation I had with him.”

As for the “disgusting human being” comment over the weekend, she admitted:

“I told Shayne he was ‘disgusting’ Sunday night because he called me to tell me he was going to ‘bury me’ and ‘drag me down with him’ on the podcast because I ended any chance of reconciliation, in addition to him feeling I didn’t speak highly enough of him in the media.”

So he actually gave her a heads up he was planning on this tell-all podcast interview? Whoa!

According to Natalie, their split came after Shayne sent “very flirtatious” texts to other women – and not because of his relationship with Shaina on the show:

“A major factor in our breakup last year is I found what I considered to be very flirtatious messages between him and other women. He’s right – I haven’t been able to get over this, and it is the main reason I can’t get back together with him. This is something we have discussed numerous times via text these last several months. His hangout with Shaina during the premiere of the show is NOT the reason.”

She said Shayne’s claim they dated four times after their failed wedding was not true, sharing that it only happened twice:

“We rekindled the weekend we filmed the reunion episode but decided to keep the door closed. Recently we met up to discuss the possibility of reconciliation but ultimately agreed not to date until he changed some of his behaviors. A few days later, I fully closed the door for any type of reconciliation after discovering some lies he told me.”

So she’s saying she was the one who ended things permanently! Wow, these two don’t agree on anything about their relationship! Thank goodness they aren’t stuck with each other, right?

Ultimately, Natalie said she felt “saddened and confused” by her former beau’s “dishonesty” on the podcast. She finished:

“Maybe in a few days I’ll have more to say on this, but right now I’m saddened and confused by his dishonesty on the podcast. I didn’t think it would get to a point where I’d have to address this publicly, but blatantly lying about me on a podcast for whatever motive is where I draw the line.”

Ch-ch-check out her entire response (below):

What are your thoughts on the drama between Shayne and Natalie, Perezcious readers? Sound OFF in the comments (below)!