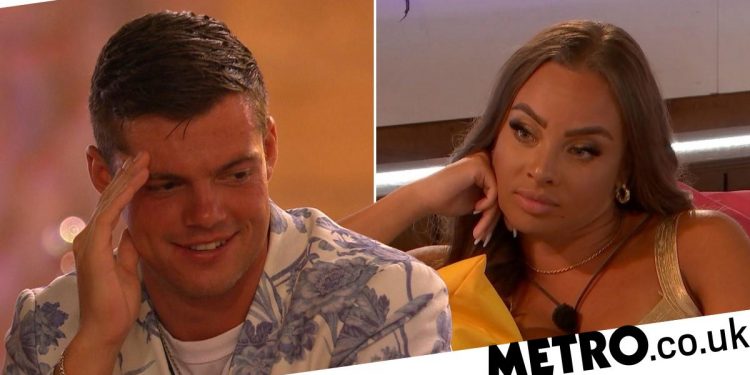 
Love Island contestant Billy Brown has said he was in the wrong to tell the other boys about his steamy night with Danica Taylor.

Billy, 23, and Danica, 21, were coupled up and getting along well, even doing bits one night in bed together.

However, they had a blow-up argument in last night’s episode after Danica learned the cheeky chappy had told the other boys they were intimate. Billy then told the dancer that he was struggling to feel a romantic connection and decided to cool things off with her.

Hours later, he was dumped from the villa alongside Summer Botwe after Laura Whitmore waded into their party to reveal the public had been voting for their favourite islanders.

It was down to the other islanders to decide who to save out of Billy, Summer, Danica and Dami Hope, and the first two got the chop.

Reflecting on what he’d change about his time on Love Island, Billy said in his exit interview referring to the Snog, Marry, Pie game: ‘The challenge, I would’ve snogged Danica instead of Gemma. But the only reason I did that was because I knew Gemma was going to pie me and I thought, “I’ll have a bit of banter, give her a peck and laugh it off”.

‘But it turned and didn’t come out the best way and that’s my fault.’

He then added: ‘And telling the boys in the morning what happened with me and Danica, I’d change that as well.’

Billy also said there’s ‘no bad blood’ between him and Danica despite their explosive row that happened shortly before he left the villa.

‘I feel fine. The reason I did that was because I didn’t want to waste time,’ he said.

‘I said to Danica that “I’d rather tell you now that I haven’t felt that click rather than just carry on and we’re not going anywhere”.

‘I’d rather leave and know that I’ve been true to myself rather than drag it on and pretend we’re a happy couple when we’re not. We did have good times but it wasn’t a romantic thing.’

During their chat in the villa, Danica told him that she could see herself ‘moving forwardly in a romantic scenario with you’.

But Billy expressed doubt and replied: ‘I know why you’re annoyed, I do get it but for me right now I’m not feeling that romantic thing.’

Just when viewers thought the dust had settled, the girls hyped Danica up a little more at the party the next day, and she fumed: ‘It’s really f*****g out of order.’

Billy seemed confused by her renewed anger and told her: ‘I’m baffled yesterday it was all good. Your tune has changed a lot since yesterday.’

Danica then informed him: ‘They’ve opened my eyes up to how much of a pushover I’ve been and your behaviour is disgusting. You’ve come across as a pig.’

All fired up, Danica then continued: ‘You’ve walked all over me. Shut your mouth.

‘I’m worth more than that, anyone would be lucky to have me.’

Love Island continues tomorrow at 9pm on ITV2 and ITV Hub. Episodes are available the following morning on BritBox.

Kiss goodbye to your social life – Love Island is back to dominate your evenings, with the new series promising more drama than ever before.

For all the latest updates, visit Metro.co.uk‘s Love Island page.

Watchdog: No Relationship Between Commissions And Home Prices