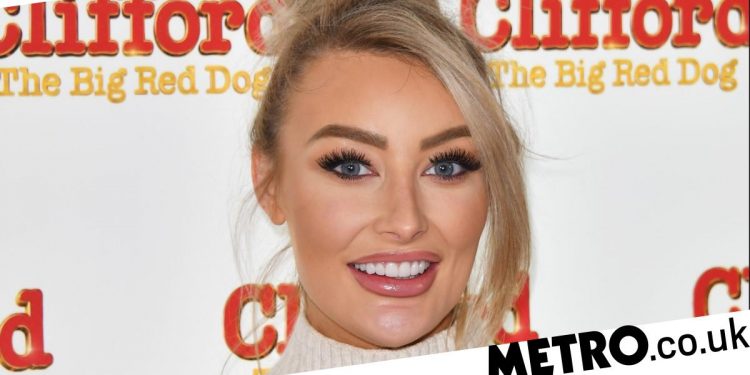 
Love Island’s Chloe Crowhurst has shared the joyful news that she’s given birth to her first child who she shares with photographer boyfriend David Houghton.

The reality star, 27, who appeared in the 2017 series of the ITV2 dating show, gave birth on Friday, two weeks after the first-time mum’s due date.

In the last update to her Instagram followers on March 25, Chloe wrote: ‘Yes, I’m still pregnant. 40+5 and no signs of baby girl.

‘Being overdue is not fun, I’m a hormonal wreck and want to cry at everything, I am getting new stretch marks every day, and it’s impossible to make plans as you never know what might happen.

‘But looking forward to a life time of love with my little best friend.’

Since giving birth, a representative for Chloe told OK! Magazine that the television personality is ‘totally in love’ with her daughter, and that she is ‘looking forward to a new chapter as a family of three’.

In January, the star revealed with her followers that she was expecting her first child.

Chloe shared the joyous news on Instagram alongside a polaroid of herself with her hands cradling her bump.

‘We can’t wait to meet you little one❤️

‘It’s been an overwhelming few months, but I am super excited for the future and creating memories with my own little family✨’

Meanwhile, the star revealed to the outlet how she kept her pregnancy out of the lime light for a while, in order to avoid unnecessary stress after a history of suffering miscarriages.

She said: ‘With my pregnancy, I didn’t announce it for quite a long time – just because I’ve had very bad experiences in the past with pregnancies and stuff like that.

‘I’ve had three miscarriages before, so I was under quite specialist care at first. It wasn’t something I wanted to advertise and cause stress upon.’

Despite her heartbreak, Chloe revealed that she stayed calm through this pregnancy.

She said: ‘I’m not actually worried about it, I don’t know why because I’m not really a chilled person, but since being pregnant I’m very chill.’

In June 2021, the reality contestant was involved in a ‘serious car accident’.

At the time, she didn’t reveal details of the crash, but simply told fans she would respond to them on social media ‘when she was able to’.

Spaced Learning: What Are The Benefits?