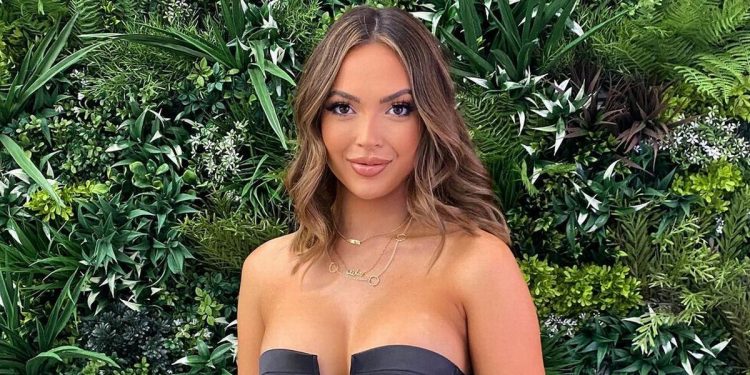 Love Island star Sharon Gaffka has shared her horror story of being spiked during a daytime lunch with her friends.

The 26-year-old reality TV star ended up in hospital after she fell unconscious in the restaurant bathrooms after her drink was spiked.

Sharon was left completely shaken by the ordeal and has finally decided to share her story in a bid to raise awareness and to share solidarity with other women who have gone through the harrowing experience.

The former Love Island star has now set her sights on campaigning to change the law against spiking.

Lifting the lid on her terrifying experience, Sharon explained that she held back on telling people for a long time because she felt ‘ashamed’ it had happened to her.

The reality TV star had been out celebrating the end of the pandemic lockdown with her pals in London when things took a turn for the worst.

“I was so ashamed about what happened to me that I never intended to speak about it. There is so much victim shaming and I didn’t want other people to judge me. But I have this platform now where around 90 per cent of my following is young women, and last year there were stories coming out about spikings by injection,” Sharon explained.

“I thought if I could normalise sharing our stories, more women might feel empowered to come forward and then we could actually challenge the perpetrators.”

Sharon recalled the incident – which took place in July 2020 – and admitted that she had drunk ‘a few glasses of wine’ and was ‘completely sober’ before falling unconscious.

Sharon fell unconscious after having just a few glasses of wine
(

The former Love Island star was spiked in July 2020
(

After she got up to use the bathroom, Sharon’s friends became concerned when she never returned to their table.

The reality TV star explained that the last thing she recalls is having a drink in her hand – and then everything went black.

“The last thing I remember was having a drink in my hand, and after that I have no memory whatsoever,” Sharon told The Sun.

“I went to the bathroom but didn’t come back so two of my friends went to find me. The cubicle was locked, they couldn’t get a response and that’s when they started to panic.”

The brave star is now ready to tell her story
(

An ambulance arrived to the restaurant after Sharon’s friends took action and called for her.

However, the paramedics dismissed the star as ‘having had too much to drink’ as they told her friends to take her home and give her water.

Despite the advice from the paramedics, Sharon’s friends insisted that there had to have been something seriously wrong as she hadn’t drunk that much alcohol.

Hours later, Sharon woke up in hospital on a drip and she had absolutely no memory of how or why she was there.

When she was discharged, Sharon knew that she must have been spiked as she felt ‘hyper-anxious’ afterwards.

Since speaking out on her experience, Sharon has been met with ‘slut-shaming’ comments
(

“I realised I must have been spiked because this didn’t feel like a hangover. I was hyper-anxious and I don’t suffer with anxiety. It was like I was having a heart attack. I couldn’t really breathe and I would jump at my own shadow. I also had a lump on my head where I’d fallen,” she told

“I didn’t leave my house for a week, or want to see or speak to anyone. I didn’t feel safe and that’s how I knew it wasn’t the two glasses of wine — I know what I’m like the morning after and this wasn’t even close.”

Since speaking out on her experience, Sharon has been met with ‘slut-shaming’ comments but she is determined to keep talking about the incredibly important issue in a bid to have laws changed in the UK.

If you believe you have been spiked, contact the police. For support, call Victim Support on 08 08 16 89 111 or visit victimsupport.org.uk.

Commonly prescribed anti-nausea drugs may TRIPLE the risk of a stroke, study suggests

Commonly prescribed anti-nausea drugs may TRIPLE the risk of a stroke, study suggests