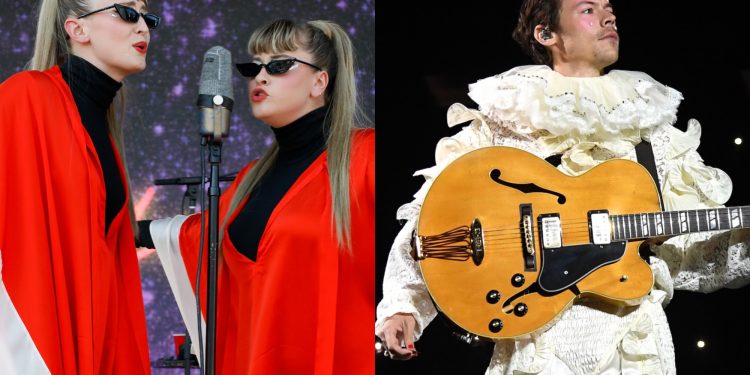 
Lucius, the US pop duo whose vocals feature prominently in the chorus of Harry Styles‘ ‘Treat People With Kindness’, have said they were not properly credited for their contribution to the 2019 song.

In a new interview with the Los Angeles Times about the duo’s new album ‘Second Nature’, they say they think they were unfairly denied a feature credit on the song, which appears on Styles’ second album ‘Fine Line’.

Lucius have, however, been tagged as a featured artist on other acts’ songs in the past, such as the title track from The War on Drugs‘ latest album, last year’s ‘I Don’t Live Here Anymore’, or Nathaniel Rateliff’s 2018 song ‘Babe I Know’.

“We start the song, we sing every chorus, just us. We trade off the bridge. It is us and Harry Styles. Harry Styles and us,” the band’s Jess Wolfe says during the piece.

“It just hurt. Here was an opportunity to spread the love a little bit, which he purports to do all the time. And it could’ve really helped us. I’ve been to Harry shows and he’s always been very charming and kind. We’ve sung live with him.”

The duo performed the song with Styles at an album release show for ‘Fine Line’ in 2019. When introducing ‘Treat People With Kindness’, Styles reportedly said, “The fun part for me is that I don’t sing on the chorus”.

Lucius previously spoke about the perceived lack of credit in another interview earlier this month, with Variety. “They didn’t want to credit us as being featured on the record. And I say ‘they,’ because we never spoke to Harry about this or anything,” Wolfe comments in that one.

Lucius’ Holly Laessig, who sings on the track alongside Wolfe, added: “They said ‘We’re not having any features on the record. And if you don’t want that, then we’ll just take your voices off and replace them.’”

NME has reached out to a representative for Styles for comment.

Styles is currently readying his third studio album, ‘Harry’s House’. The follow-up to ‘Fine Line’ is set to arrive on May 20, and has been previewed with lead single ‘As It Was’, which arrived on April 1.

The track broke a Spotify record on its first day of release, with the streaming platform confirming that it had become the most-streamed song in the United States in a single day with 8.3 million US streams. The record was previously held by Olivia Rodrigo for ‘Drivers License’, with 8 million streams.

Heartbroken mom of Brooklyn shooting victim speaks through translator about ‘anxiety’ as son, 16, has serious surgery

Heartbroken mom of Brooklyn shooting victim speaks through translator about 'anxiety' as son, 16, has serious surgery