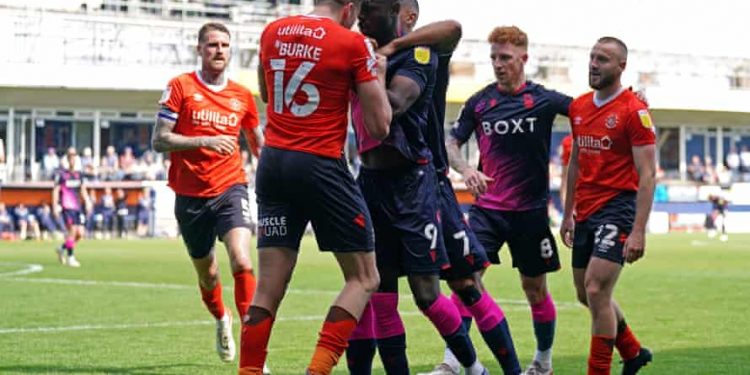 
Kal Naismith’s first-half penalty proved enough to earn Luton a 1-0 win over their Championship playoff rivals Nottingham Forest at Kenilworth Road. Luton had to hang on with 10 men for the final 15 minutes after Sonny Bradley was sent off for a trip on the substitute Sam Surridge.

Luton started strongly, Bradley’s raking ball out of defence was miscontrolled by Djed Spence and Fred Onyedinma was denied by the body of the goalkeeper Brice Samba. Forest then went close on 13 minutes. Keinan Davis made a powerful run and found Lewis Grabban, whose low strike drew an excellent stop from James Shea.

Midway through the half, Naismith’s ambitious 30-yarder flew over, with Onyedinma’s effort from a similar distance deflecting into Samba’s gloves. Grabban’s speculative attempt on the half-hour skewed well wide but the deadlock was broken on 37 minutes, Jack Colback handling James Bree’s cross in the area for a penalty.

Forest thought they were level early in the second half, Spence going through to beat Shea, but the linesman’s flag again went in favour of the hosts as it was ruled out for offside.

Adebayo looked to add a second on 55 minutes when Forest gave the ball away, but his snapshot from distance dribbled through to a back-pedalling Samba. Naismith almost doubled his tally, left unmarked to meet Robert Snodgrass’s corner but his header went down into the ground and over the bar.

Back came Forest, with the substitute Philip Zinckernagel left completely isolated to head at Shea with his first touch. Ryan Yates then skied an inviting chance over the top, before the Hatters were reduced to 10 men for the final 15 minutes when Bradley saw a second yellow for bringing down Surridge.

Zinckernagel’s effort from the free-kick cannoned off the wall, before he went even closer, curling against a post, with Shea denying Spence from the follow-up. Zinckernagel then blew Forest’s hopes of a late leveller, blazing over from just outside the box.

Luton’s win ended Forest’s 10-game unbeaten run and saw them move above their rivals into fourth. “It was a magnificent performance,” said the Luton manager Nathan Jones. “First half I thought we were outstanding – really, really good. [Then] we had to dig in, defend our box well and we did.

“I thought tactically we were superb. Two of the outstanding young individuals in the league this year have been Brennan Johnson and Djed Spence and we went Amari’i Bell and [Fred] Onyedinma against them. I felt they were exceptional today, so tactically I thought we were brilliant, we went up against a top, top side and managed to get the win.”

The Forest boss Steve Cooper was unhappy with the officials – “so many things didn’t go our way” – and felt his side had been worth a draw. “We could have played better than we did first half, we played well enough second half to get at least a draw, and we didn’t, so we have to get on with it,” he said. “It’s the first time we’ve played in hot weather for a while, it seemed like a long game with the minutes that were played. But it’s not abnormal to have a physical and emotional game and you have to get on with it.”