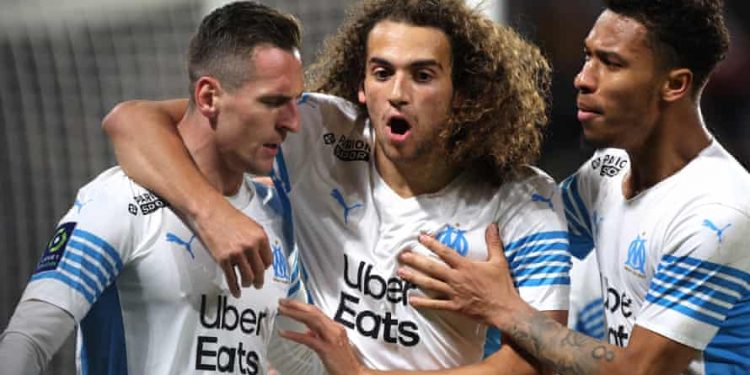 
Lyon looked vulnerable before their massive game against in-form Nice this weekend. A renewed focus on defence in 2022 had helped them creep up the table, picking up a draw against PSG and wins over Troyes, St Étienne and (most crucially) Marseille, but that unbeaten run came to a grinding, creaking halt in Monaco last weekend.

Injuries played their part in their 2-0 defeat to Monaco. Karl Toko Ekambi, Houssem Aouar, Jason Denayer and Damien Da Silva were among the absentees, with new arrivals Romain Faivre and Tanguy Ndombele only on the bench. Their defensive frailties and lack of control were on full display in the first half at the Stade Louis II, where they went 2-0 down within 27 minutes. They improved in the second half after the introductions of Ndombele and Faivre, as well as Rayan Cherki, but with the academy product now sidelined for several weeks with an ankle injury, they had reasons to be worried before Nice came to town on Saturday.

Lyon were also up against the weight of recent history. Their defeat to Nice on the final weekend of last season denied them a place in the Champions League and they suffered a cruel defeat at the Allianz Riviera earlier this season. In their match in October, Lyon were 2-0 up with 10 minutes to play before a red card for Tino Kadewere precipitated a meltdown and they lost 3-2. One had to wonder what impact these matches might have on the hosts mentally this weekend.

Lyon manager Peter Bosz had marked this match out as having more than a note of revenge about it, even as he had to deal with the absence of Jérôme Boateng. The veteran World Cup winner has missed a handful of matches this season with injury, but he has been a largely capable presence in defence. However, rumours swirled of a falling out between the two men after Boateng questioned Bosz’s tactics in the wake of the loss in Monaco, after having reportedly come to blows with Bruno Guimarães before the Brazilian upped sticks to Newcastle.

Bosz seemed to take it all in stride, though. In his pre-match press conference, he said pressure was simply part of the landscape at a club like Lyon. He also suggested that his team had not necessarily played poorly against Monaco but had been undone by a couple of individual mistakes.

His counterpart at Nice, Christophe Galtier, was also coming off an uneven start to 2022. Nice have knocked PSG and Marseille out of the Coupe de France and are now just 180 minutes away from their first trophy in 25 years. But they have also put in a number of lacklustre performances this season, most notably in 1-0 defeats to Clermont, Troyes, Metz and Lorient.

With no European distractions this season, Nice were perhaps favourites to finish second but, instead they are now four points behind Marseille and just one point above Julien Stéphan’s in-form Strasbourg. With games against Strasbourg, PSG, Marseille and a dangerous Montpellier side all to come before the next international break, Nice went to Lyon on Saturday under pressure to get a result.

Disaster seemed to be in the offing for the hosts when Moussa Dembélé missed an early penalty, but Lucas Paquetá stabbed home the rebound. However, VAR intervened and Dembélé was allowed to retake the penalty, this time finishing decisively to give Lyon a 1-0 lead. The opening goal proved to be a spark, with the pace of Toko Ekambi pinning back Nice’s makeshift right-back Flavius Daniliuc, and Ndombele and Maxence Caqueret forming a dynamic, whirling buzz of activity in midfield, while still providing more than enough physicality to shield the defence.

Paquetá seemed to enjoy playing with Ndombele and Caqueret. He looked far sharper than he has done in recent weeks and was revelling in some mouthwatering moments of one-touch football with Ndombele. The Lyon defence could have been light given the absences of Boateng, Denayer and Sinaly Diomandé, but it also looked assured. The 19-year-old Castello Lukeba – who started alongside Thiago Mendes – turned in another bravura presence, rendering Nice striker Andy Delort all but invisible.

Dembélé, who has struggled at times since returning after a broken leg, looked sharp. With four goals in his last five matches, the former Celtic striker looks more like the player who scored 15 goals in the curtailed 2019-20 season than the one who was shipped off to Atlético Madrid last January.

While the Boateng situation still looms, for the moment it seems that Bosz was right about the result in Monaco last weekend – it was an aberration rather than part of a trend. Walter Benítez made several decent saves in the Nice goal, and defenders Dante and Jean-Clair Todibo turned in strong displays. Bosz rallied his players and they produced a performance that Toko Ekambi called their “best of the season”.

Lyon are still seventh in the table but, after four wins in their last five games, things are looking up. They are only five points behind Nice in third with 14 games to play. They have already played PSG and Monaco twice, and their upcoming matches against Lens and Lille do not look as tough as they might have done earlier in the season. With a renewed squad and a slightly more cautious approach, a return to the Champions League is still potentially on the cards.

Nice’s problems were magnified when Marseille scored a late winner in Metz. What Marseille have lacked in stylistic consistency this campaign, they have more than made up for in results. They are now four points clear in second and their January arrivals appear to be improving what had been a middling attack. A tilt at the Europa Conference League could yet complicate their run-in, but Jorge Sampaoli’s side seems to be going from strength to strength and they look increasingly likely to return to the Champions League.

Brest produced perhaps the most eye-catching scoreline of the weekend, thumping Troyes 5-1. In getting a brace from Inter loanee Martín Satriano and another from Franck Honorat (who has now scored eight league goals this season), Brest manager Michel Der Zakarian has offered a firm rebuttal to those who thought the departure of Faivre would hinder his swashbuckling tactics.

Finally, could Pascal Dupraz be engineering another great escape at St Étienne? After his famous team talk inspired Toulouse to stay up in 2016, he was given the Sainté job, but little was expected of him given the club’s lack of resources. The club scraped a vital win against Angers a fortnight ago, but fans must have been fearing the worst when they were dumped out of the Coupe de France by amateur club Bergerac. Instead, they have followed up the Angers win with another two victories in the league and now are level on points with Troyes in 16th. Nothing is sealed yet, but safety now looks possible.